Edit: Not sure if this should be the very first line here, but if you decide to do this make sure you get a 315Mhz BCM, if you're in North America. It was suggested to me that that didn't matter because there is an adaptation channel to choose the frequency. I went with a ROW spec BCM. Found that the key fob didn't work and thought it was a pairing issue. Turns out it only worked when held a couple inches away from the BCM, discovered by @xabhax. NAR spec BCM solved the issue.

So it is generally known that facelift Mk7's (and other facelift MQB cars) have a BCM with no long coding. While there is plenty of reason to upgrade to a BCM High (support for heated seats, fog lights, etc.) there isn't much reason for retrofitting a facelift BCM that I can think of, beyond wanting RGB ambient lights. The common belief is (was) that pre-facelift cars do not support RGB ambient lights. That is not entirely true, as discovered in my thread here. My pre-facelift BCM does support RGB ambient lighting, but in a very limited way compared to facelift cars. I updated the first post over there, but will add more detail of the limitations at some point.

Now moving back toward the target here... but a quick run down of concerns (this list might grow):

I will, in the first few posts, probably experiment with some different formatting to show pre-facelift vs facelift adaptations. Where the adaptations have the same IDExxxx-ENGxxxxxx numbers with same/similar descriptions I may not always include translations (because laziness). Where the difference is only IDExxxx-ENGxxxxxx numbers I will somehow indicate that but probably won't translate much. I will have to figure a way to clearly indicate when a channel exists in one map but not the other. And finally I intend to add translations and descriptions (as best I can figure out, but with community help as well) for those channel groups that replace functions previously configured via long coding.

Finally, this will be a slow process. I've got a newborn at the house and I've got the facelift BCM on my computer desk so getting this done is not an urgent matter. I'm not going to go through the trouble of reserving a bunch of posts as this project will not be quick. If anyone has any format suggestions please post an example. Ultimately I want this to be easy to decipher. Even after I start making posts with formatting, I will go back and edit if/when a more clear format is suggested. It may turn out that a Google spreadsheet makes the most sense for this, but we shall see.

Edit: As I thought more about this it occurred to me that I should reserve a few posts for the following reasons:

This post will contain is the VCDS screen captures of the long coding configuration of my current BCM. All of these functions have been moved into adaptations on facelift BCM's. Expect that a good portion of the adaptations channels that exist in the facelift BCM but not in the pre-facelift BCM are related to these. Also has long coding for a couple BCM connected "modules." 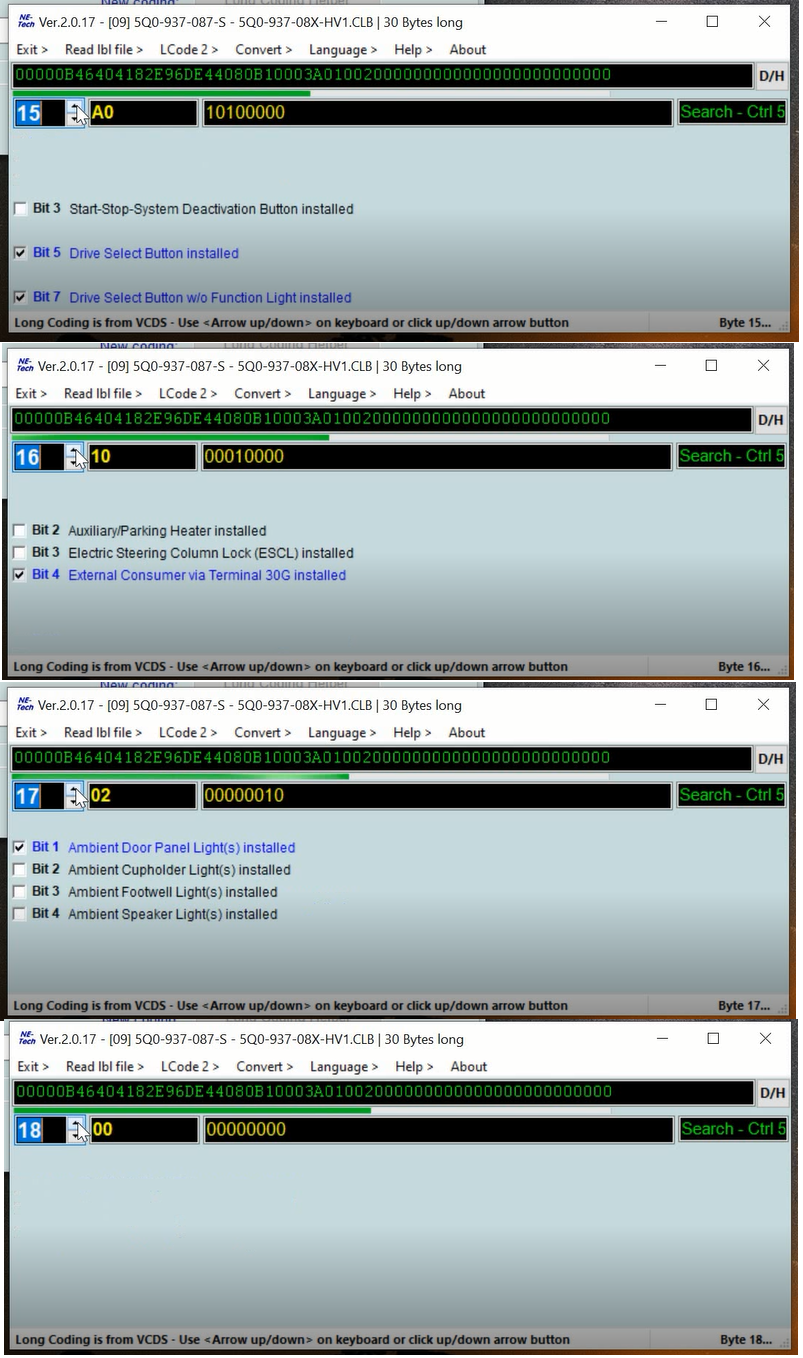 Here is the long coding for the Windshield Wiper Motor (or Module, or Servo?)... 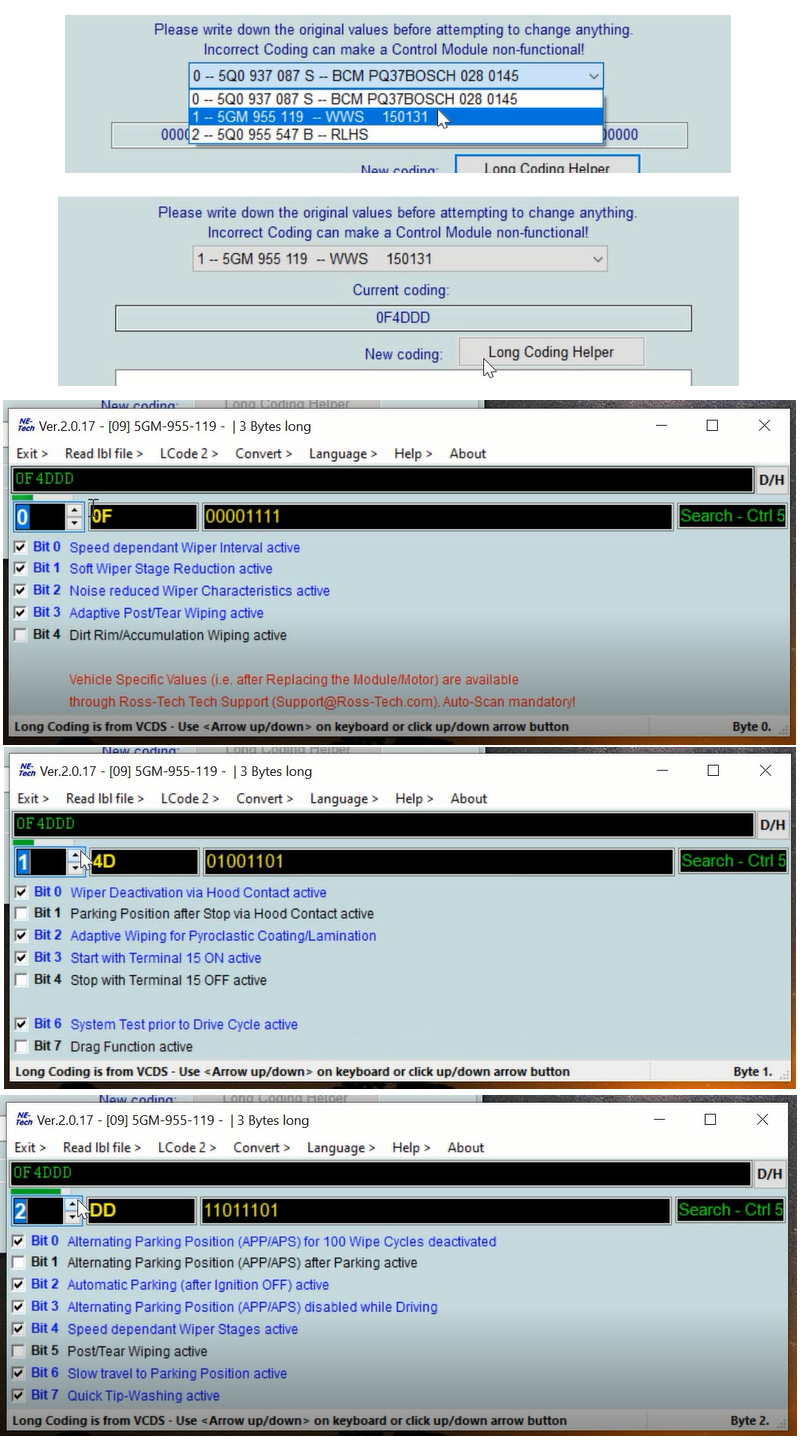 And here is the long coding for the Rain/Light/Humidity Sensor... 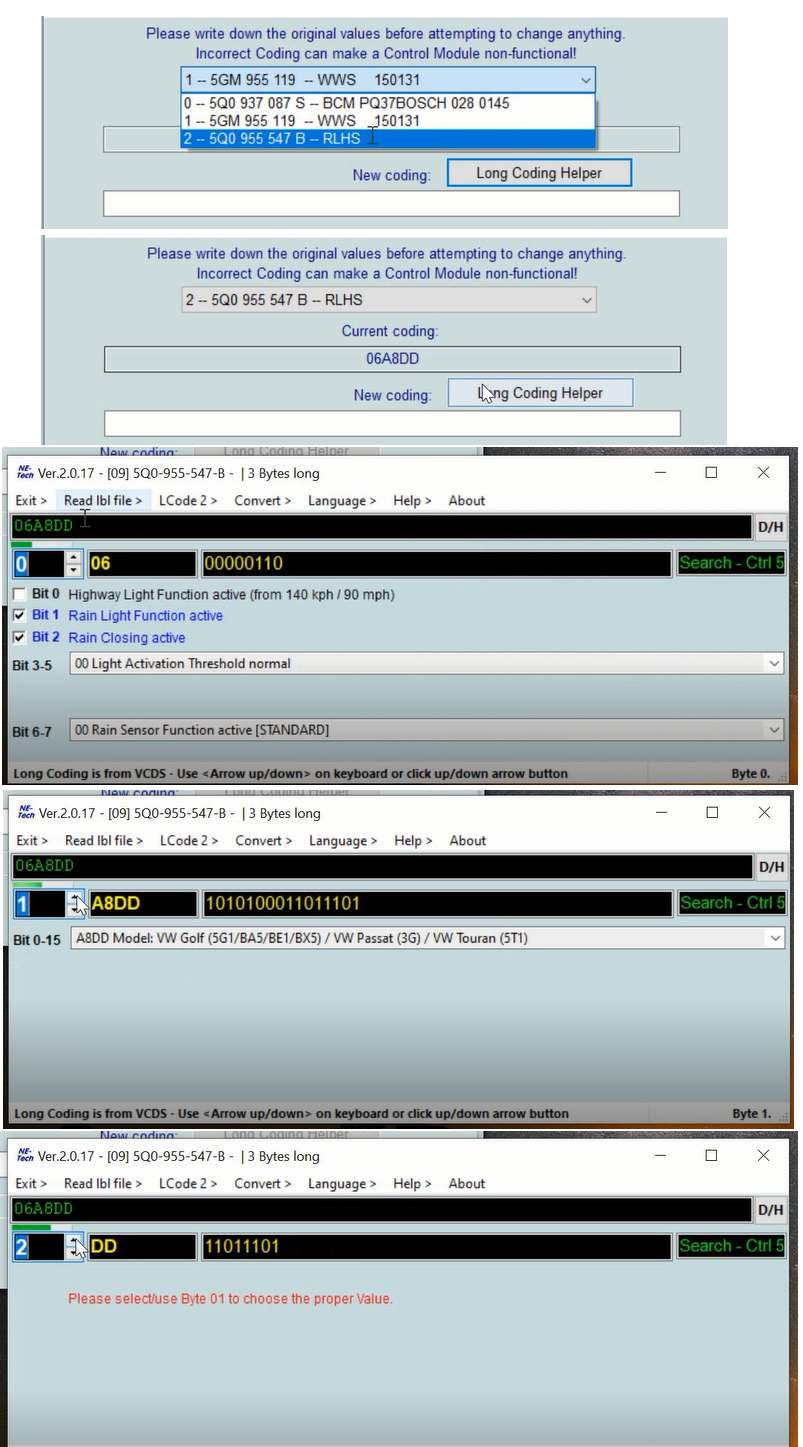 Evolving (as I remember them) list of BCM related tweaks/mods currently implemented in my car:

So here's the VCDS long coding of my existing BCM with experimental labels enabled. A few things...

Second part of this post will include channels that I find interesting and want to remember for possible future tweaks and/or retrofits:

I gotta step my retrofit game up. Your pulling ahead ,

xabhax said:
I gotta step my retrofit game up. Your pulling ahead ,

Good luck with the BCM though, all those adaptation channels make my head hurt. It look me a couple days to get my xenons working as they are supposed to.
Click to expand...

My head is pre-emptively hurting as well. And I wouldn't count this as a retrofit of anything until it's done

From what I've been told by Downtime (from some other forums) I may need to downgrade the software of the facelift BCM (from DD to CG) if I have issues with the rear defroster. I don't remember ever using but I don't want there to be a problem if I need to.

The adaptations will not kill me, though I may kill someone, haha. I'm working my way through them, tedious though they are. I've been updating the first posts in this thread, and will continue to do so.

But I wanted to take a moment to thank @DV52 for putting together a really slick BCM compare Excel sheet using the ad-maps from my old and new BCM's. I've been using the compare plugin in Notepad++ (after messing up some setting in WinMerge) to see the two ad-maps side by side. This does work but lots of Alt-Tabbing is required. The document put together by @DV52 puts all the channels that are present in both BCM's and with not matching settings right up top. It makes it dead simple to go through and match those up. As a big relief to me this includes the all the lighting (Leuchte) channels.

As mentioned before the facelift BCM has a "Lighting Configuration" channel with a really long string that configures all of the exterior lighting. What I hadn't realized is that you can still configure a facelift BCM using the "old style" Leuchte channels and it will automatically populate the Lighting Configuration channel as appropriate (the opposite is also true, changing values in the Lighting Configuration channel changes the corresponding Leuchte channels). I should mention this is discussed in the MQB Lighting Case Study thread over Ross-Tech which I've read tens of times and didn't fully grasp until now.

In any case, on a facelift BCM equipped car this allows the 600+ Leuchte channels to be configured using just the single Lighting Configuration channel. This is nerd territory but I might love the facelift BCM.
G

I followed the link in my thread in RT and registering here to following up.

I’ve been there upgrading the BCM from a MK7,5 (mine being a MK7) and had all the weird issues, I still have some ones related to the rear doors but no errors in my scan due the new BCM coming from a 2 doors GTI.

More than happy to help you out if you need and hoping this thread also help me to get those few errors sorted.

It would help me (and anybody else) out in my progress. And if I (or we) can help with errors I will.

Can you post a link to your RT thread as well? I'd love to read it.
Edit: I 100% read your post thinking you meant an RU (as in Drive2.ru) thread. If you meant "RT" I'd still love to read it, even though I don't know what RT is, yet, maybe

That was certainly a question I had when I started this... but the facelift BCM says don't worry about it . 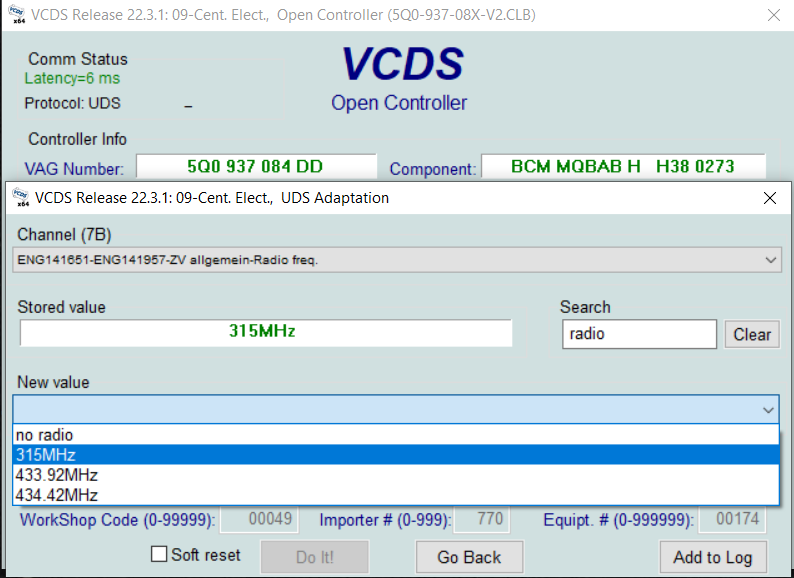 So here's a current ad-map of my facelift BCM. I've transferred everything applicable from my pre-facelift BCM. And to the best of my knowledge I've also set all of the pre-facelift long coding "settings" properly in their respective facelift adaptation channels. The only thing I haven't finished entirely is the interior lighting adaptations. Some of them are done (to get the on-screen options, 30 colors, AID/Infotainment colors, colors by driving profile) but some are not. Specifically there are timing adaptations (these do exist in pre-facelift BCM's by the way) so that you can have the ambient lighting come in sequence. Think something neat like footwells, door pockets, door handles, door/dash strips... but fading on with a 2 second gap between each once a door is opened. It will look like the car is "powering up" and the same sequence can be done in reverse.

I am working on a spreadsheet/list that makes sense of this. Progress will continue to be slow. All the adaptation setting I've done (on the MQB bench setup, at my computer desk) has been in the 10-15 minute windows allowed by the new baby. He is completely uninterested watching me sit here, although he's quite content to watch me walk around and do other things, haha. The document I have now won't make sense and is not consistent as I kept finding better ways to keep track of things.

It would help me (and anybody else) out in my progress. And if I (or we) can help with errors I will.

Can you post a link to your RT thread as well? I'd love to read it.
Edit: I 100% read your post thinking you meant an RU (as in Drive2.ru) thread. If you meant "RT" I'd still love to read it, even though I don't know what RT is, yet, maybe

Here's the thread that I have in RT (Ross-Tech) regarding my AFS retrofit.

I do have the Ad-maps and scans from before and after the new BMC.

The ad-map of the old BCM:

With the new BCM: