SLC4EVER said:
What brand shift knob is that? Not bad.
Click to expand...

Sportshifters.com they are fully customizable also.

for me it’s the best knob on the market for our cars in regards to a full package of quality and fitment and detail... I was ready to pull the trigger on the BFI, and just deal with how the narrow shaft didn’t look right with our cars and especially how the stock boot looks with it , but luckily I came across this. Once I received it I realized how Much thought actually went into the design the boot shaft has a washer design that is even notched to clear the stitched lap joint on the boot to give it a smooth fit also the washer is setup with air gap design so the boot alway stays tight but is swivel after install so your thread stay lined up between the shifter and boot. 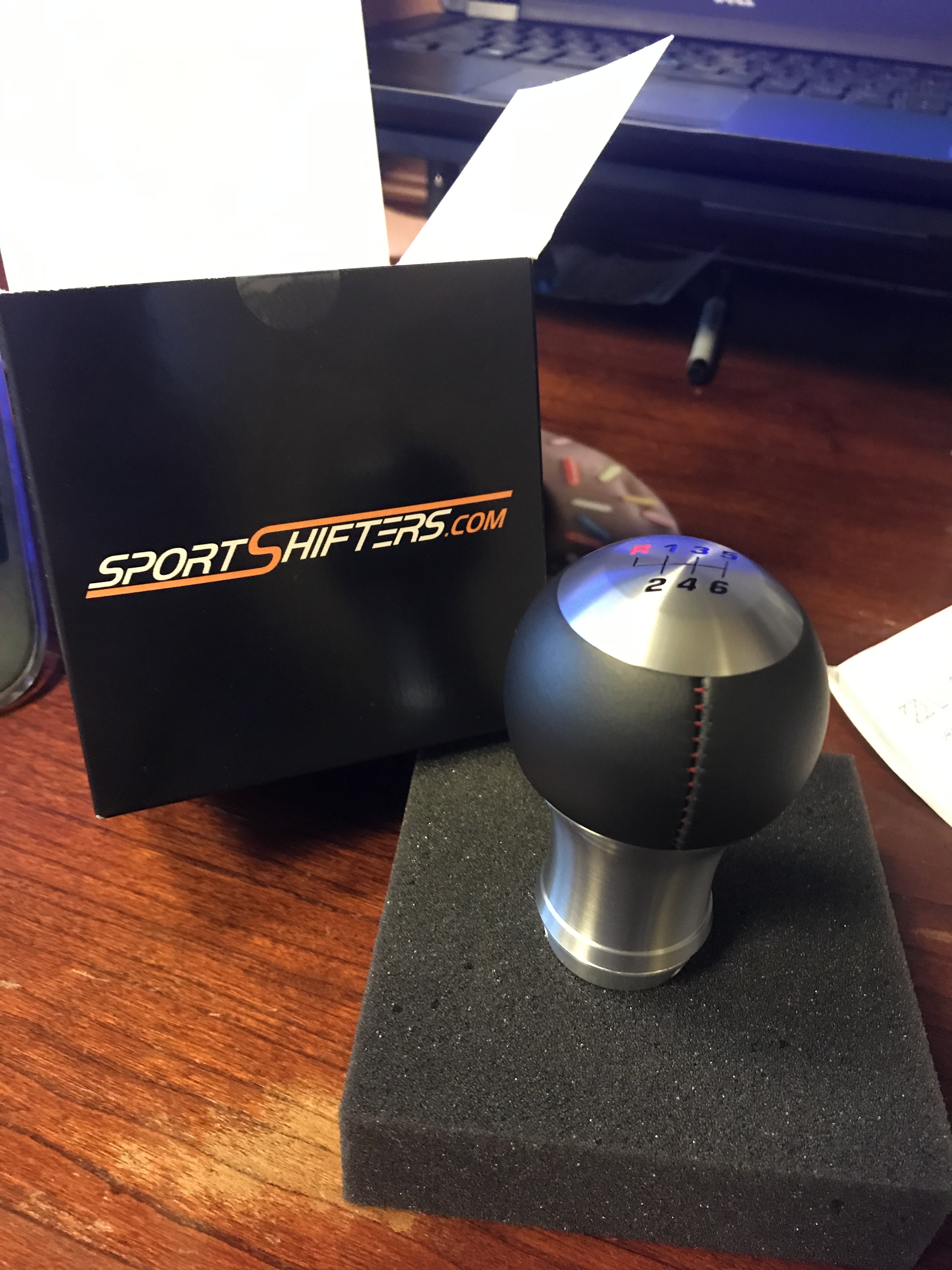 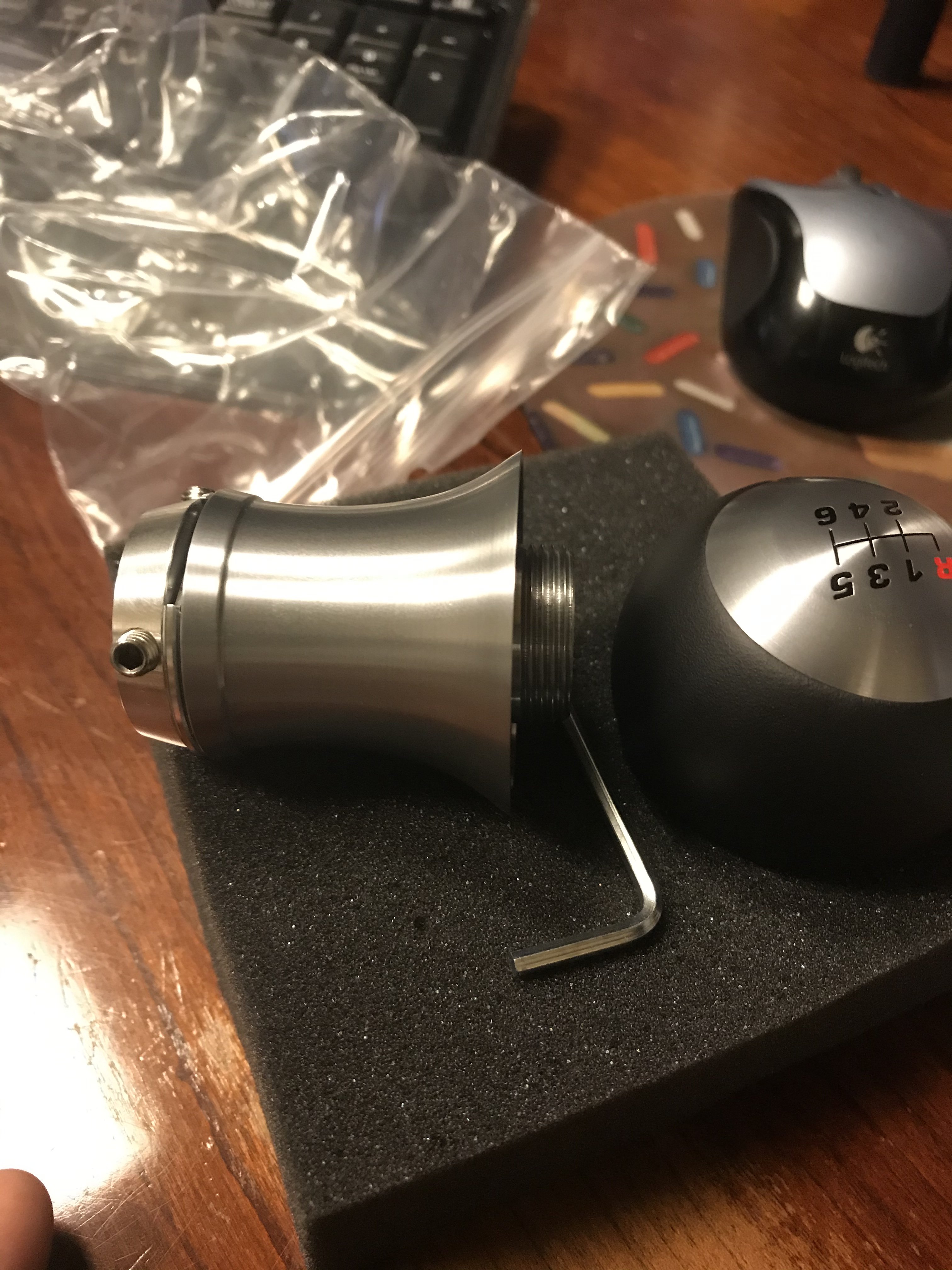 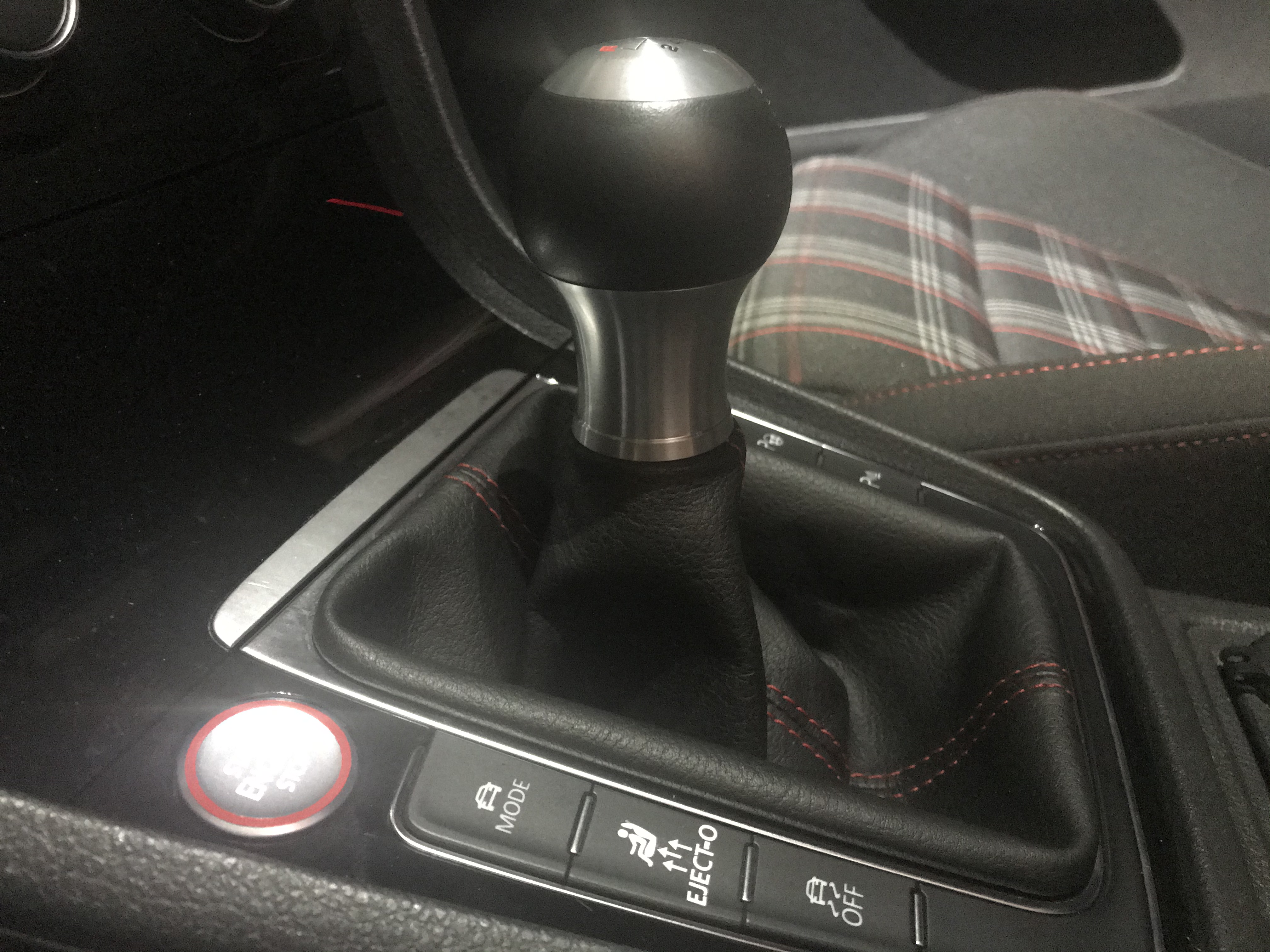 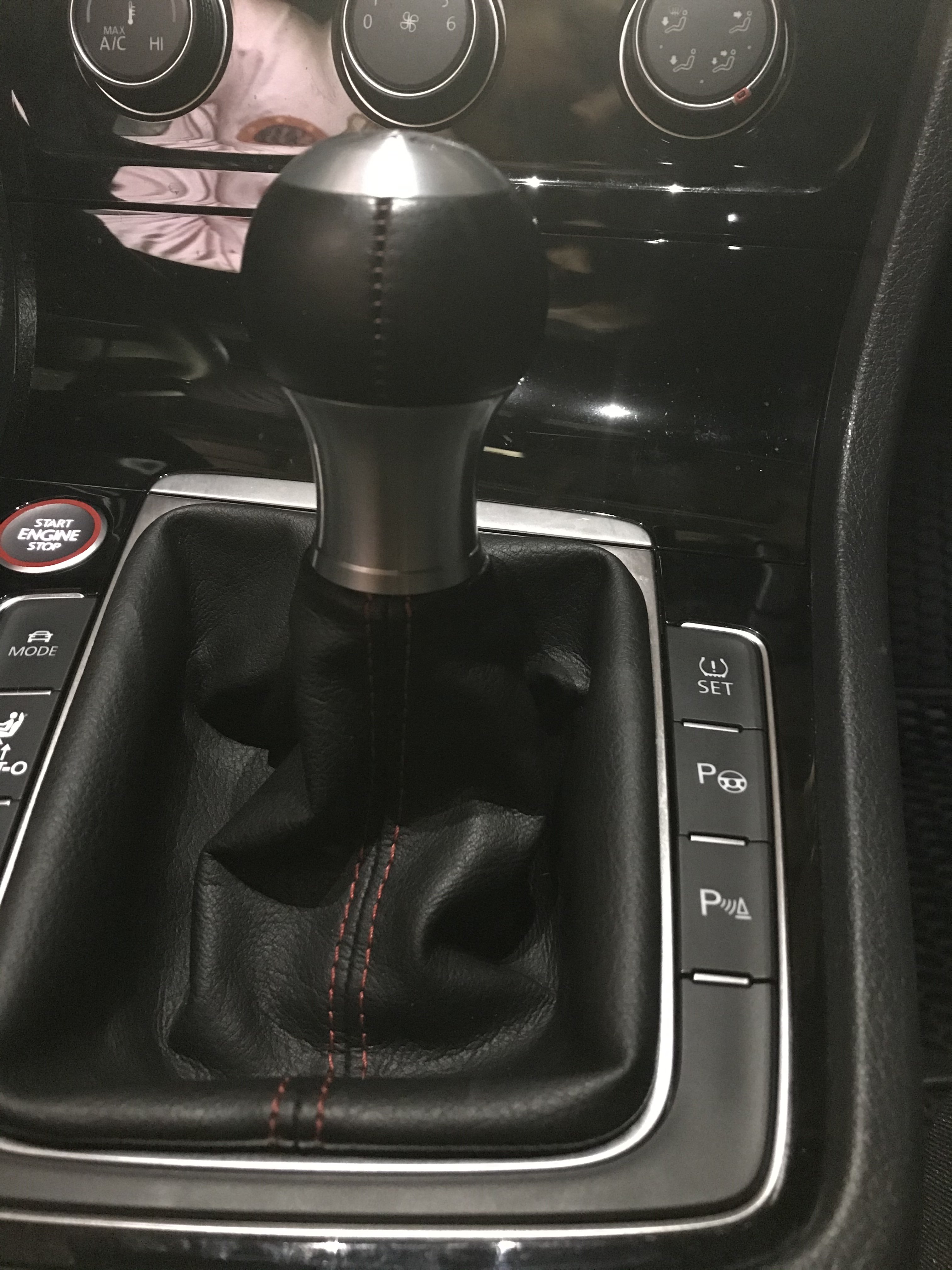 Desslok said:
You had better take care of that cut on your finger.
Amazing clarity. Was that picture taken with a real camera, or some kind of high falootin' $1200 cell phone?
Click to expand...

I finally installed my aerofabb splitter and spoiler extension.

Did you do the top fill method for DSG fluid change?
D

Very cool, thank you. I agree with all your points. I'm going to give them a try. The only thing that bugs me about this knob is that it's not double stitched like the boot, but all of the other points outweigh that minor flaw. I also like that the engraving isn't so in your face or a logo. Very clean. Thanks again!

anotero said:
Did you study at UMich?
Click to expand...

What gave it away? Haha. Yeah, I did.

anotero said:
Did you do the top fill method for DSG fluid change?
Click to expand...

Well, funny thing is I intended to do drain/measure/top fill but ended up doing a hybrid.

When I began to top fill, I realized had not put the plug back in because I got distracted by my 3 year old who was in the garage with me while I was under the car, so I lost some fresh fluid back into my drain pan. I quickly realized my mistake, but not quickly enough to know how much fluid I'd actually lost so I just went ahead and put in the whole Pentostin jug, warmed the fluid to 36ºC per OBDEleven, and pulled the main plug again to "properly" level it off using the drain tube. Took longer, but no big deal.

I'm not sure what all the fuss is about top fill method "taking forever". It only took about 30 minutes or so to get the whole Pentosin jug into the trans. Ambient air temp was 65ºF here in the Bay Area and the car had been sitting outside until I pulled it into the garage at 230pm.

I used the Hopkins Flo-tool funnel which does truly fit perfectly into the DSG filter hole. I removed the screen in the funnel, though that didn't seem to make a difference in flow speed), but what I found would help speed things along a bit was just squeezing the tube downward, like milking an utter if you've ever seen that done. Doing that would create a bit of a burp in the fluid and it'd go down a hair faster. I think it actually took longer to get the fluid up to temp if I'm honest. Like 35 mins to go from 22ºC where I started to 36ºC.

I'm going to do them every 30k if I end up keeping the car long term (I plan to take it to ~10 years/100k and maybe beyond) because it's not hard and the kit is super cheap from RockAuto.

The only thing I wish I could do is figure a pressurized pump method to go from the 5L Pentosin jug direct to the filter fill hole to speed up the fill and make this job even quicker. Since that kit is so cheap and is also the factory fill, I'd like stick with it. One guy in George AB's DSG DIY thread mentioned putting his the ball inflator needle from a powered tire pump through a penny nail hole in his 1L containers and being able to push it in that way, but he had a direct fit attachment for the 1L bottle mouths.
The Pentosin 5L jug is not a standard lid, it's one of the ones with the small pull out plastic pour spout like Liqui-Moly has on their 5L jugs, and I couldn't remove the main cap from the jug so getting some sort of adapter cap that fits specific to the bottle is likely out of the question. Building one from the current lid I have here is maybe a possibility, but I've gotta get the container sealed up to take it someplace to dump it first.
E

SLC4EVER said:
Very cool, thank you. I agree with all your points. I'm going to give them a try. The only thing that bugs me about this knob is that it's not double stitched like the boot, but all of the other points outweigh that minor flaw. I also like that the engraving isn't so in your face or a logo. Very clean. Thanks again!
Click to expand...

welcome, yeah they have lots of engraving options too, and owner said you can request or even Flip it yourself if you don’t want the stitching visible. (Audi owners I guess)
T

So I got my vent mounted boost gauge installed and operational. With one of the two switches provided I made it to where I can swap between red or blue. Shout out to uniwerks for the vent mount. Works great and fits well.

I replaced the the drain tube in the hatch. The grommet had completely disintegrated so it was draining into the car. Part number 510 827 861A (I drive a '15 GTI SE). Taking out and putting back in the trim I used a shopDAP video, those noises though...felt like I was breaking everything...but nothing broke. Phew.

The M on your hatch window.
I got accepted but ended up going to Georgia Tech.

Finished up my complete shift upgrade. One of the first things I did when I bought the car was to remove the clutch delay and add the SS braided clutch line. I finally got around to getting the rest of the pieces to remove the shift slop and shorten up the throw. I ended up using the ECS shift kit which works well and comes with good instructions. I had to move the forward/back pin on the short shift assembly a couple of times to find the right throw for me, but all in all, a pretty straight forward install. I finished off with a SportShifters.com weighted shifter.

Have not used it a lot so far, initial indications are crisp and short throws of the shifter. As most experience after a similar install, it is a little stiff as the parts start mating together. Will have to see after a couple hundred miles if it gets a little smoother.

hi guys. I need some help please. I need a mk7.5 gtd bumper with headlight wash, radar hole and sensors. I also need 7.5 wings too. I’m struggling to find good ones for a good price. If anyone can send me a link that would be appreciated thanks !
D

VW Vroom said:
I replaced the the drain tube in the hatch. The grommet had completely disintegrated so it was draining into the car. Part number 510 827 861A (I drive a '15 GTI SE). Taking out and putting back in the trim I used a shopDAP video, those noises though...felt like I was breaking everything...but nothing broke. Phew.
Click to expand...

Happened to me on my previous car. On my current one I put black silicone sealant around the grommet. Hope it prevents the same problem. Huge PITA to fix this.
K

Initial impressions are it is expectedly stiffer, but I was surprised how much shorter the pedal travel is.

Had to replace satin chrome trim around shifter. Chrome peeled off from my NA GTI. Received AE vagbase part for 22€ today. Fits perfect, chrome finish perfect, minimal color difference to chrome on cubby but no brainer for me. 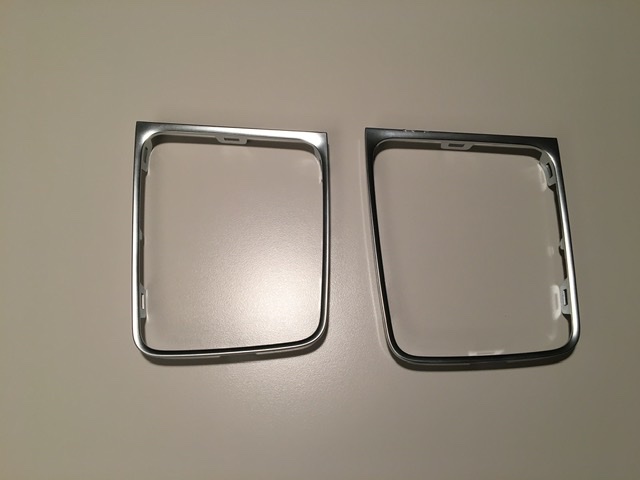 Same on MT and DSG, right? Do you have the part number?

My schedule says 60k, not 100k. But I think 40k is more realistic. My mistake. Still runs better!