Strange clutch problems, not sure what to do

Story time...Alright, so all of this started about 3 weeks. I was backing out of my driveway, put it in first, started letting the clutch out, and I felt something weird happen with the clutch. I went to shift into 2nd and the clutch was just really soft and spongy. I took it for a drive around the block. Parked the car for 10 minutes or so, started it up again, and the clutch was normal. About a week later it happened again when I was starting the car. Since then it's been happening fairly regularly. A lot of the time when the clutch goes soft it happens as I'm starting the car. I'll have the clutch pedal about half way out and as I'm releasing it you can feel something in the pedal and then you can tell it went soft. Once it goes soft I don't believe it has ever gone back to normal while the car was running. Any time it's returned back to it's normal pressure it has been while the car was off or while I was starting it. It has gone soft while driving, but it's not as common as it going soft at start up. The clutch never sticks to the floor. It always comes back up, it's just slower and doesn't have as much pressure.

Yesterday I had the bleeder valve delay removed and we bled the clutch. It was fine for my first couple start ups and drives, but later that day it went soft again.

I'm tuned on the stock clutch right now, and I know how weak these pressure plates already are, so I'm not against that theory at all. I haven't noticed any slipping except for all the slipping I do trying to take off from a stop with the weak pressure. It takes a while to grab, but once it's grabbed it seems to be fine.

I've tried doing some searching, but I can't find anybody except 1 guy on a volvo forum that had similar problems. He replaced the master cylinder, slave cylinder, the clutch, and still had problems. Then people were telling him to replace the clutch line and do a full system flush, sounds like he did that and he never went back to the forum to complain so I assume it fixed it.

I'm just not sure what my plan of action should be. I've got a new clutch sitting at home with a pressure plate and slave cylinder already, so putting in a new clutch isn't a huge deal. As I said I'm tuned so the clutch needs to go in anyway, but I'd hate to put the new clutch in and then continue to have this issue while trying to break in a new clutch. I feel like I'll roast it before it even gets broken in.
Mk7.5 Golf R 6sp - EQT Stage 1 93oct
SOLD: Mk6 CSG GTI 6sp
R

Or does the thrust bearing have some play in it? I had a problem with my STI a few years ago. Cold start it would do what you described and then when warmed up and romping on it, no slip, even at top end which was against what I thought it was doing at first start.

I would say install the new clutch et al, you'll be able to see if there is play in the thrust bearing or see if any lines or whatever are worn and go from there. If you don't have problems, it was to do with something you now have replaced and if you do have problems, at least you know it isn't what you installed and you can troubleshoot from there. That's what I would do.

reallypeacedoff said:
Or does the thrust bearing have some play in it? I had a problem with my STI a few years ago. Cold start it would do what you described and then when warmed up and romping on it, no slip, even at top end which was against what I thought it was doing at first start.
Click to expand...

It's not always cold starts, but it's definitely more likely to happen on cold starts. This morning I got into the car, played with the clutch a little before I started it just to check if it was normal and it was. I started the car, started letting the clutch out, and I felt it go soft. I let the car idle for only a few minutes and shut it off, when I started it back up the clutch was normal again. I drove to one place 10 minutes away, came back to the car and it was still normal for another drive 10 minutes away. I got some my groceries and went to start my car and it went soft. When I got back to work pumping the clutch a bit and stopping/starting the car a few times eventually got it back to normal, and a couple hours later when I went out for lunch it was still fine.

Yesterday it went soft when I was about 3 minutes into my drive and it was soft the entire 30 minute drive until I stopped the car and turned the motor off and back on.

I ordered a flywheel from FCP and a clutch line from KMD today. I'll have that installed with my RSR clutch soon I guess...The thrust bearing would be the last thing I want to deal with, and I brought up crankwalk to my mechanic but he didn't seem to think that was the issue.

Ended up having a flywheel that failed. 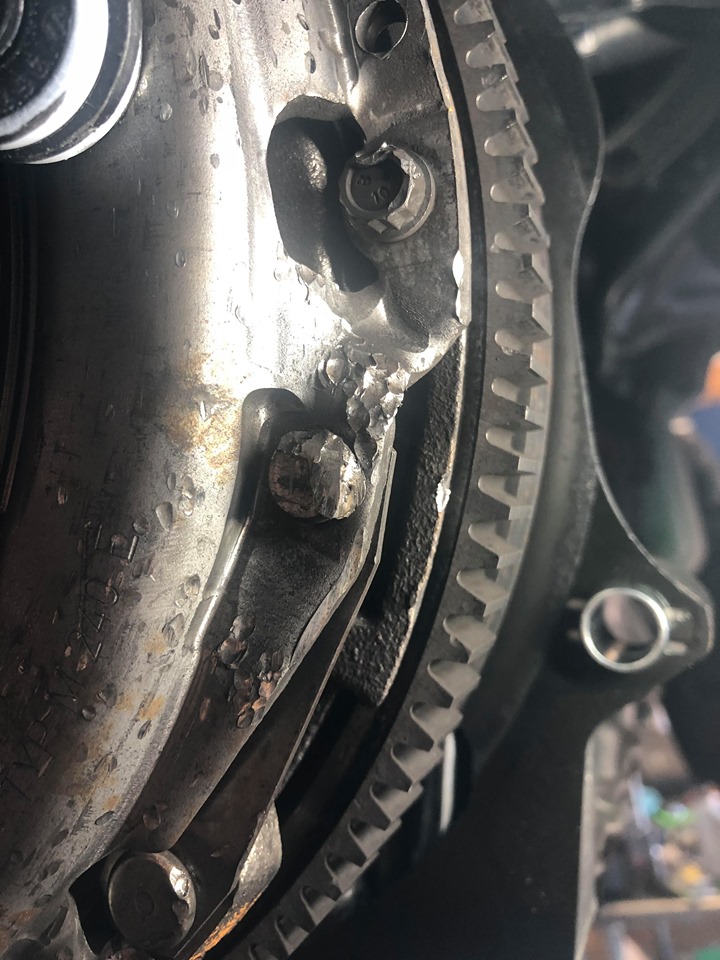 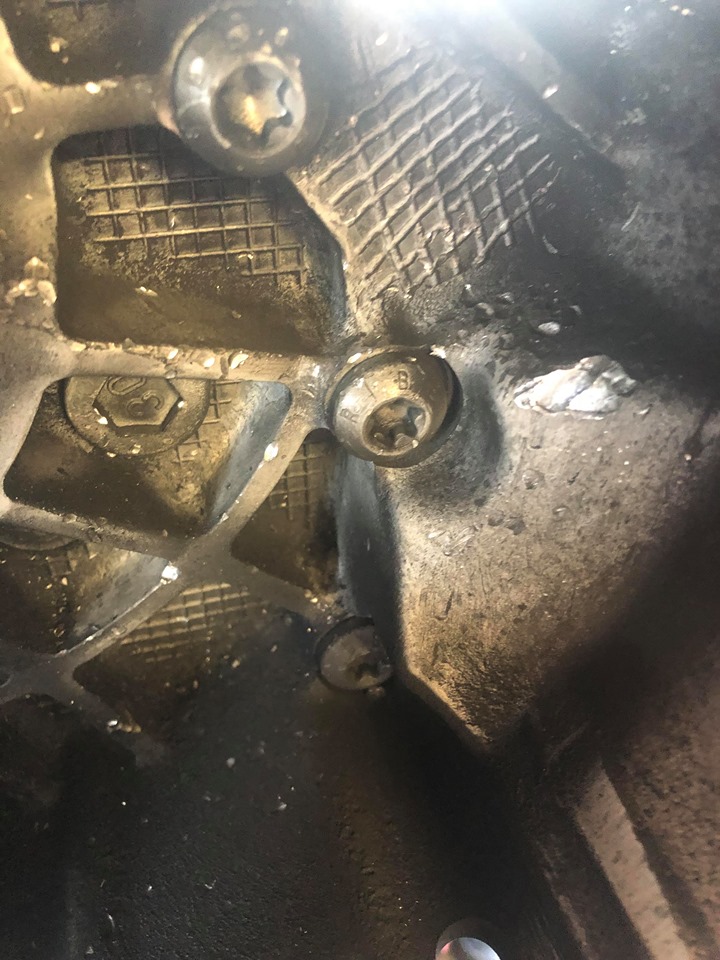 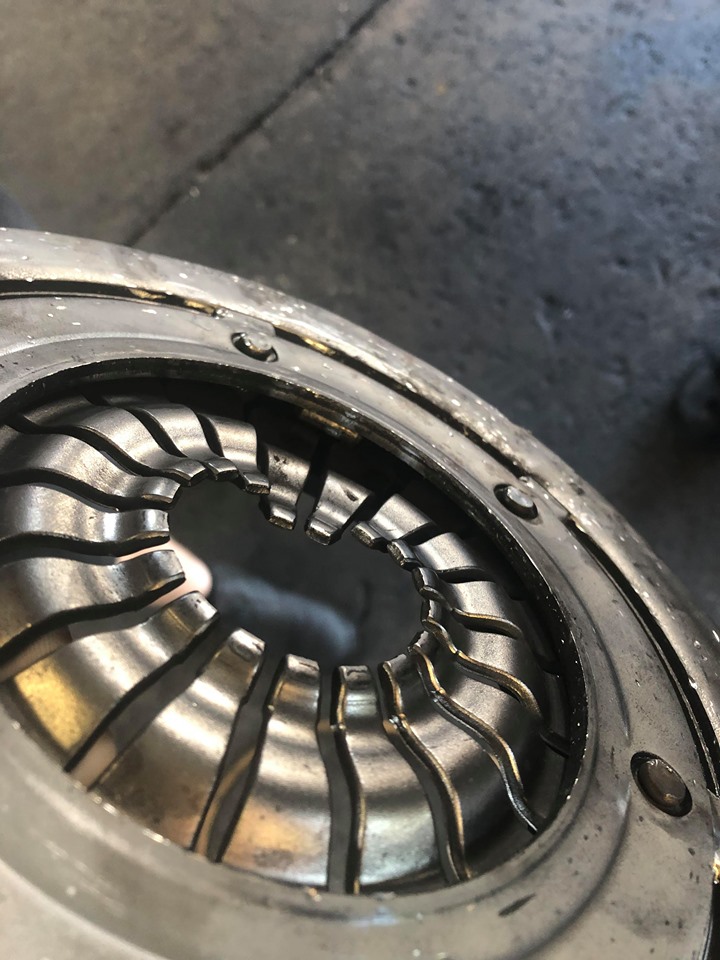 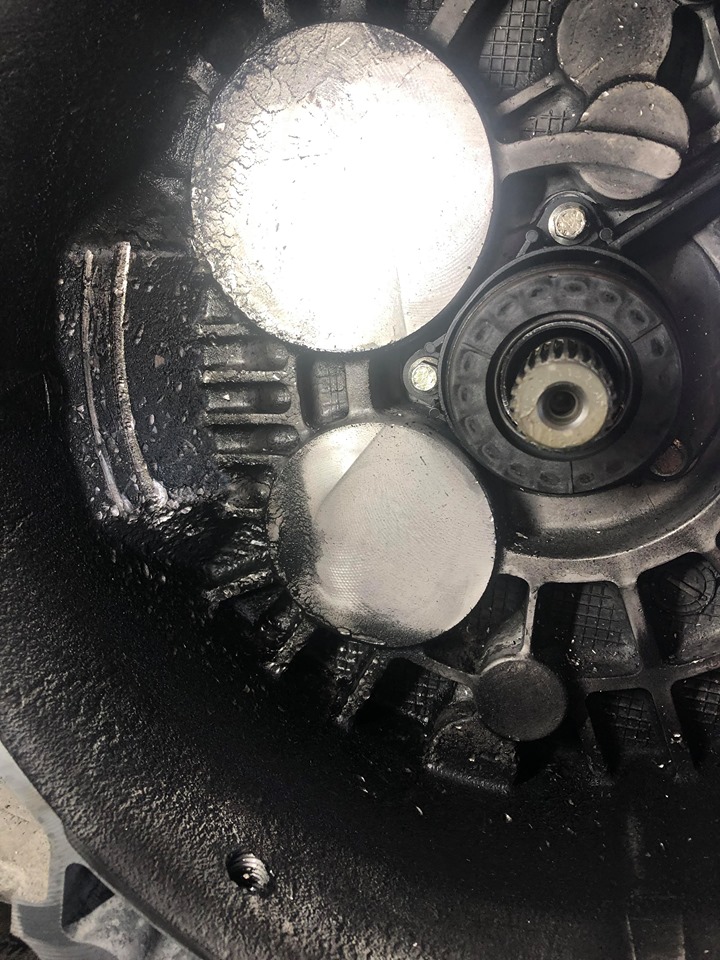 Looks like you cought it just in time.
N

sterkrazzy said:
Ended up having a flywheel that failed.

That's the clutch pressure plate. And yeah, it sure did fail.

NCM said:
That's the clutch pressure plate. And yeah, it sure did fail.

Yup, I didn't post the video of all the play in the flywheel though. It was in there pretty loosey goosey. All the marks inside the bellhousing are from the flywheel banging into things.

There's a good chance the flywheel failed because the pressure plate failed first though. I'm not sure which order it may have happened in. Both parts were destroyed.
Mk7.5 Golf R 6sp - EQT Stage 1 93oct
SOLD: Mk6 CSG GTI 6sp
You must log in or register to reply here.
Share:
Facebook Twitter Reddit Pinterest Tumblr WhatsApp Email Link
Top