Riceburner goes from 2 GTI's to one S4

guys i need some moral support. as bad as i really wanna do is38, dp, I/C, Clutch (also need new brakes and maybe some suspension refresh stuff)... i have really been getting bike fever. my wife wont even let me talk her into getting a grom but mayybe a scooter, like a ruckus. they go like 35, probably a struggle cause i weigh like 220 lol. but it would be so much fun too i think.
My 'build' thread
R

riceburner said:
guys i need some moral support. as bad as i really wanna do is38, dp, I/C, Clutch (also need new brakes and maybe some suspension refresh stuff)... i have really been getting bike fever. my wife wont even let me talk her into getting a grom but mayybe a scooter, like a ruckus. they go like 35, probably a struggle cause i weigh like 220 lol. but it would be so much fun too i think.
Click to expand...

As a current GTI owner a former Grom owner and a hoarder of probably enough spare parts to built 2 whole ruckuses... they both are a blast and great for around town. At one point I had 3 ruckuses, sold them for a Grom then got bored and sold that for a 2015 Street Bob. Eventually riding became a chore (especially with a passenger) so I got a car for a toy. To me, the car is so much more fun and safe. Bikes are rad for the two months of the year by us.
2018 GTI SE

well things are about to get interesting.

Was saving and planning to get a southbend clutch setup and new brakes - in preparation for going is38, then saw a screaming deal on here for:

ECS IS38 'kit' with blanket and turbo muffler delete, used but only 8k miles
With an integrated engineering intercooler
and AWE downpipe

Got it all shipped to less than half of what it would all cost new - way too good to pass up!

Guess i could install the downpipe and intercooler but gonna have to wait till i do the clutch to slap on the IS38. The temptation is gonna kill me!!
My 'build' thread

Well, had some fun throwing in the HPA downpipe and i.e. intercooler!

Also threw in the ECS rear strut/swaybar brace and ecs adjustable rear endlinks. For what should have been a 20 minute job, i gotta say that was a pain in the ass. One of the bolts stripped from the rear endlink so i couldnt get the nut off. Had to take the whole swaybar off and use a handsaw blade by hand (i lost both my saw and dremel kit wtf!!) to work in a flatblade. But now that I'm done the rear feels much better over bumps and does seem to have a more sharp turn-in which it was really lacking before.

Car sounds amazing with the downpipe. Cant tell its there at idle. Can barely tell when putzing around. Has a nice smooth bark when on it. Getting the stock dp out, especially with the e-diff was a nightmare but its done.

The intercooler install was also... trying... but again, getting the OE out sucked but putting the new one in was a breeze. Hard to say if i feel a true power increase right off the bat but i know the numbers all point towards ~10-20+ whp.

Now i gotta think if i wanna do apr stg2 to enjoy the dp and make more power for now or wait till i do the clutch and is38 and just go ham. 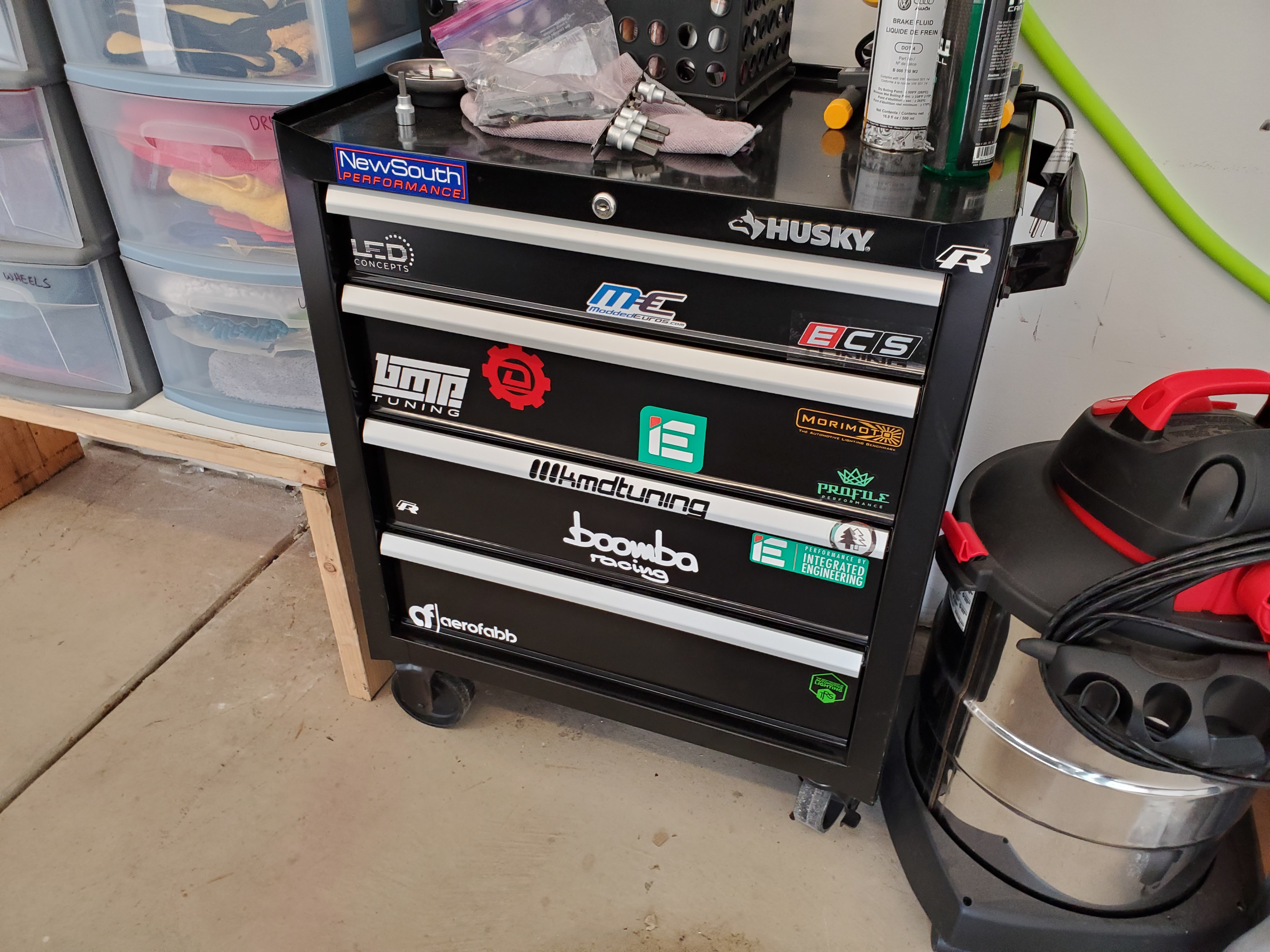 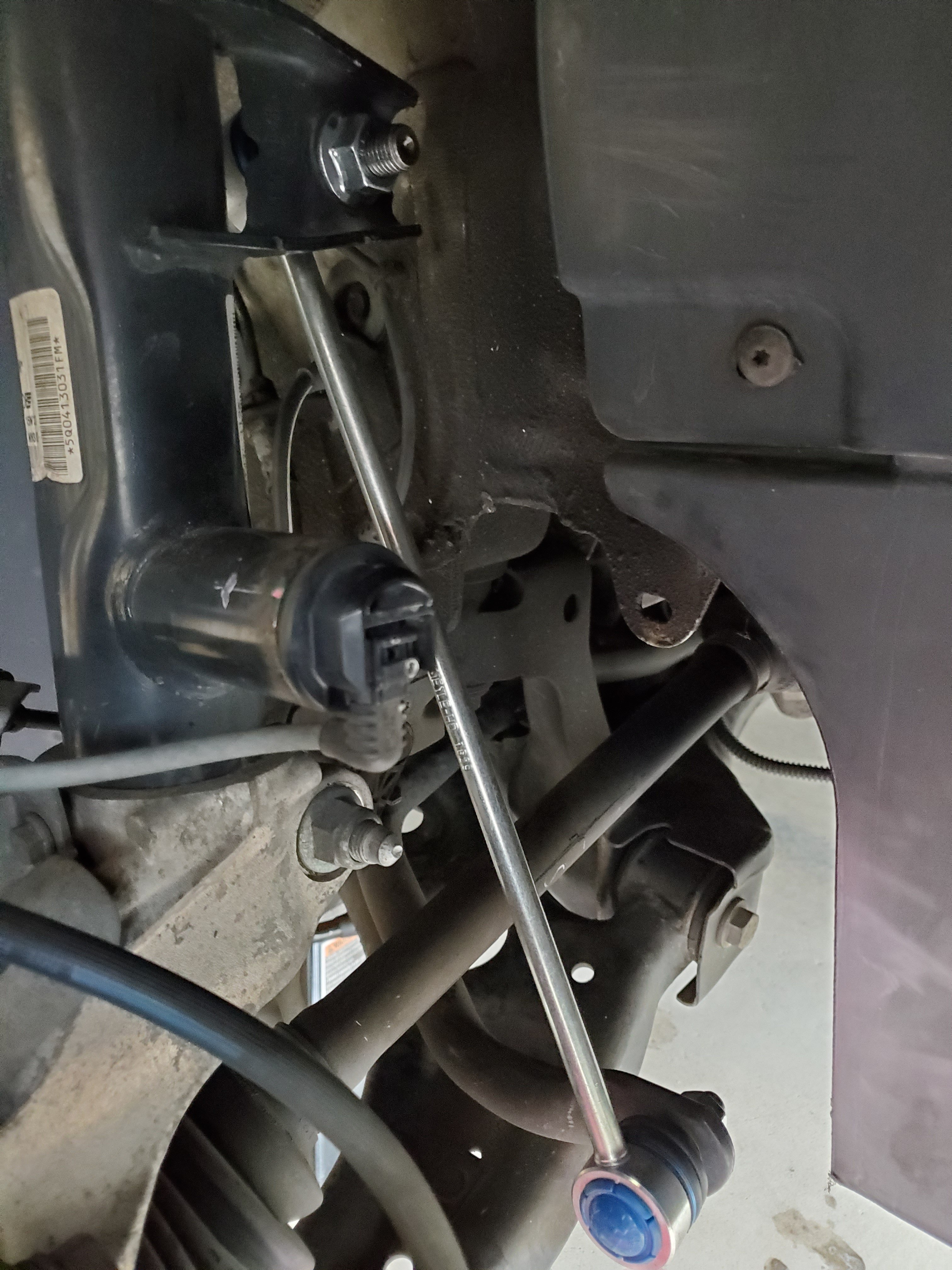 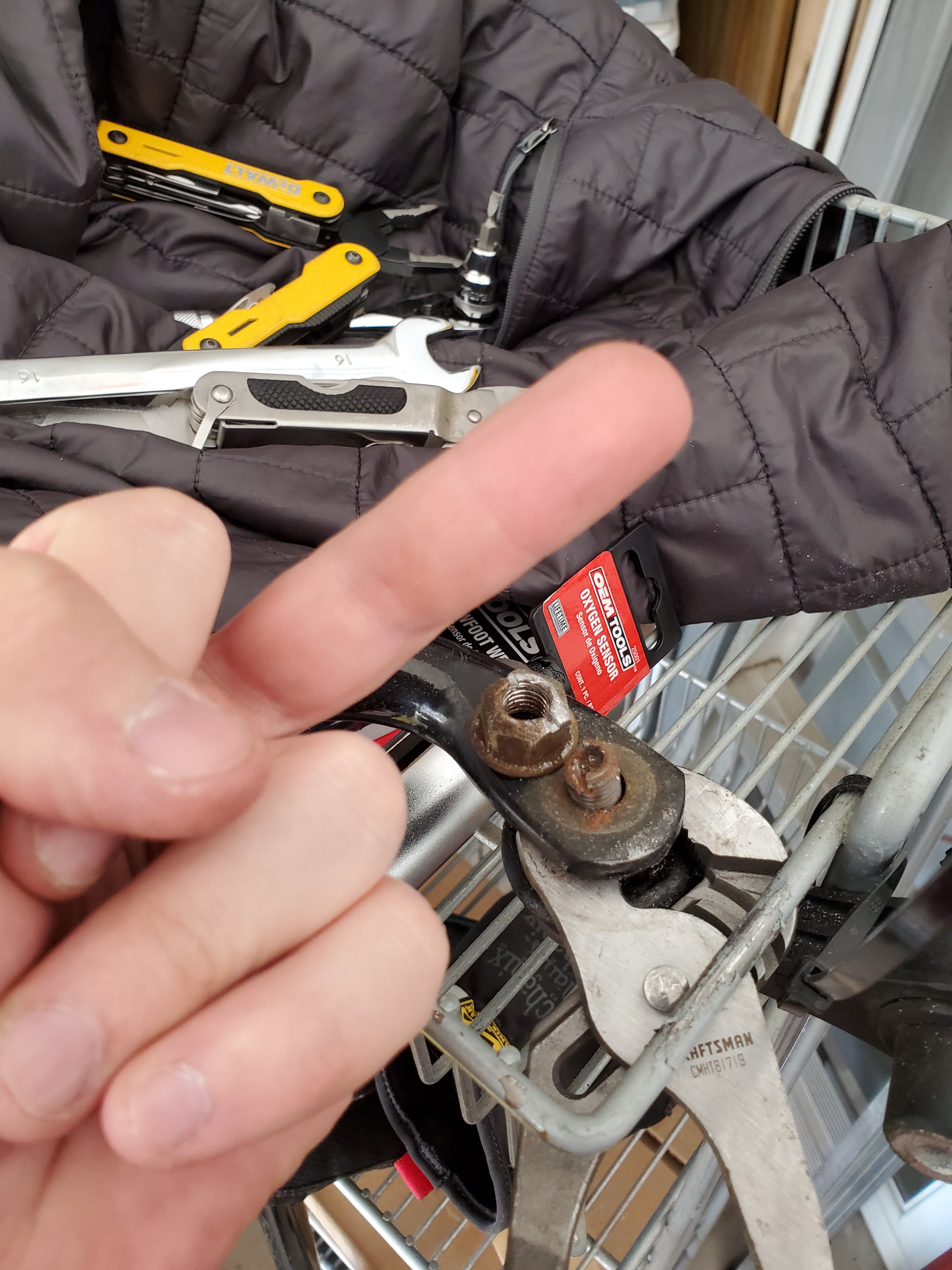 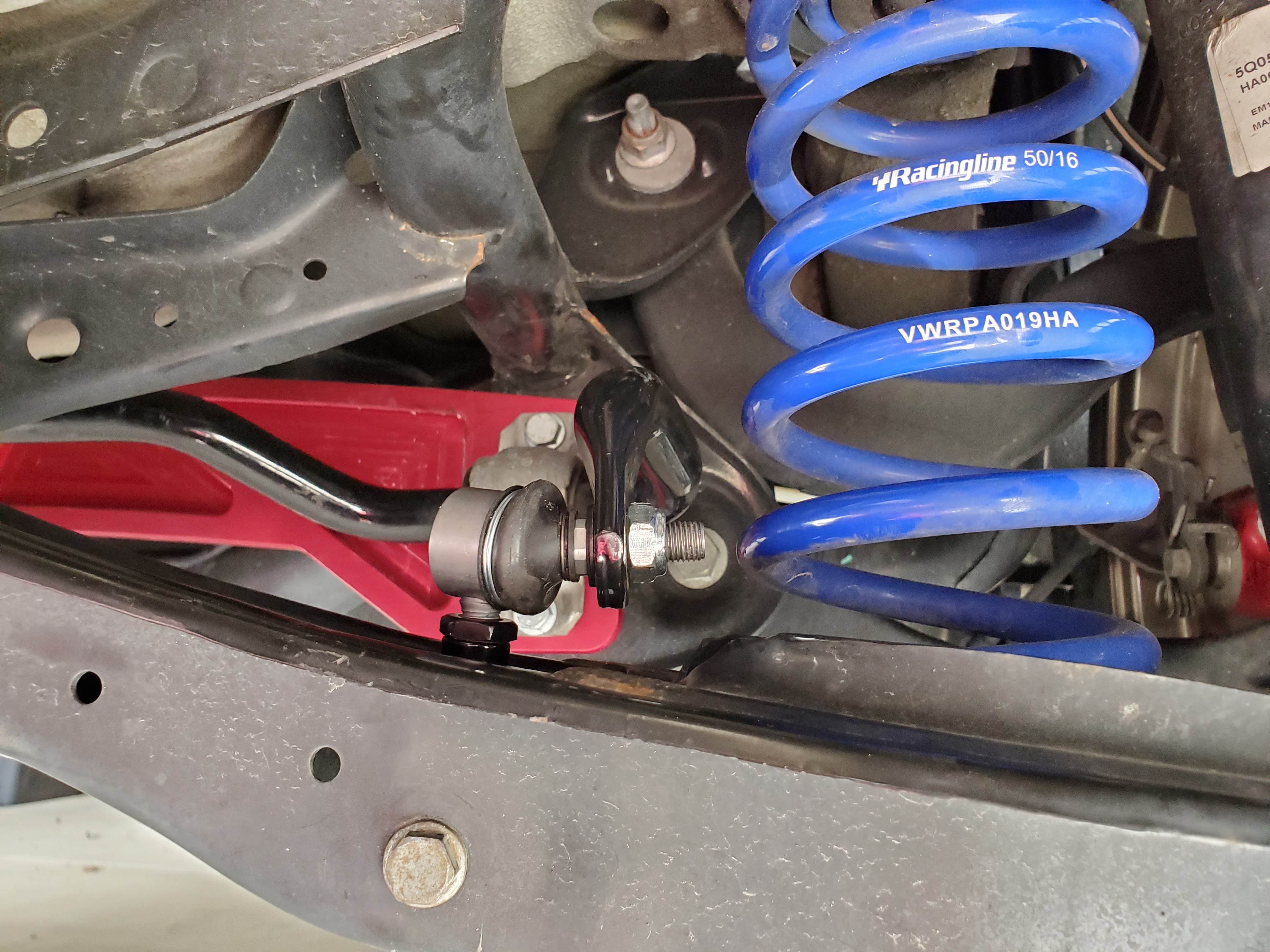 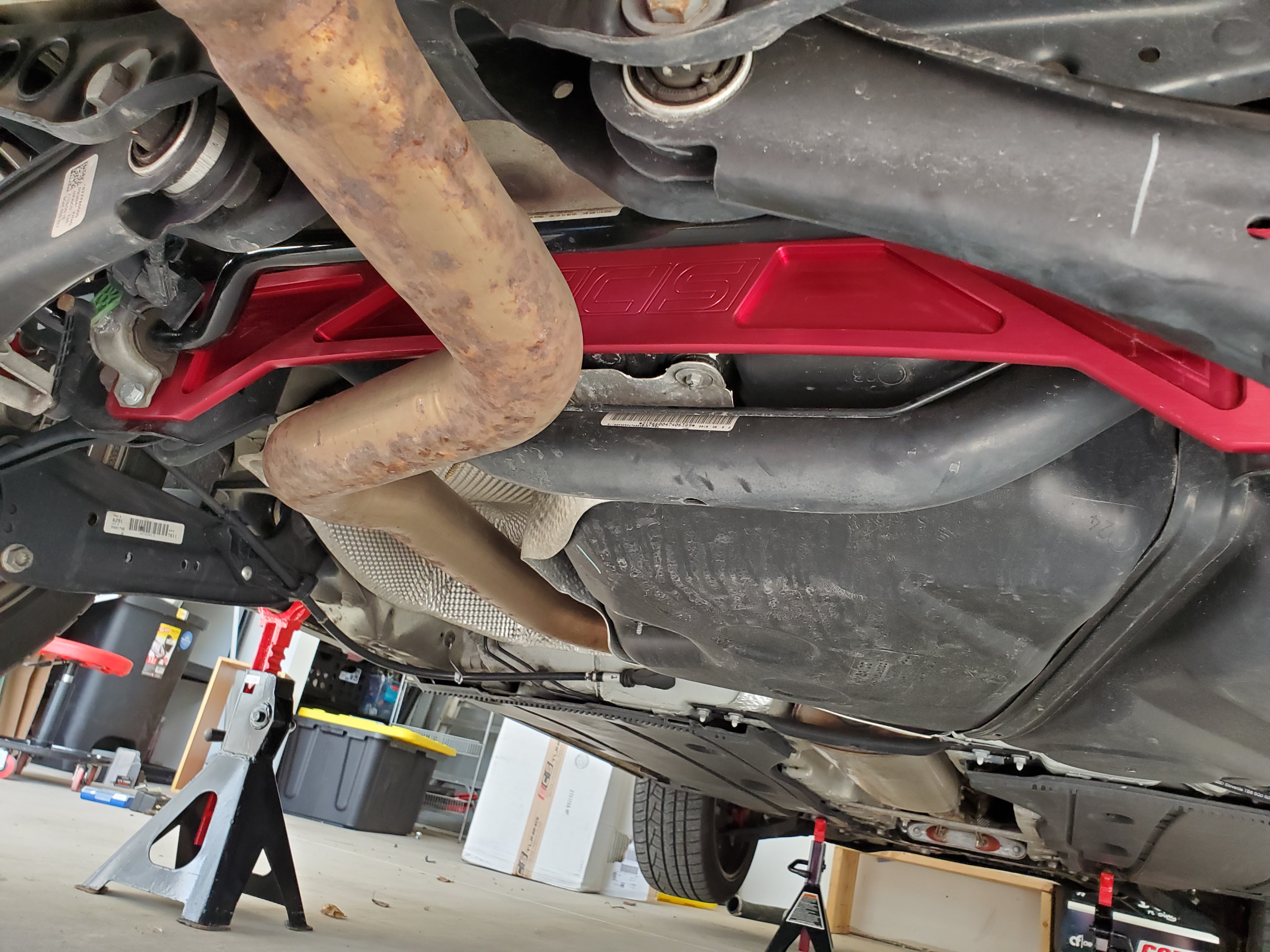 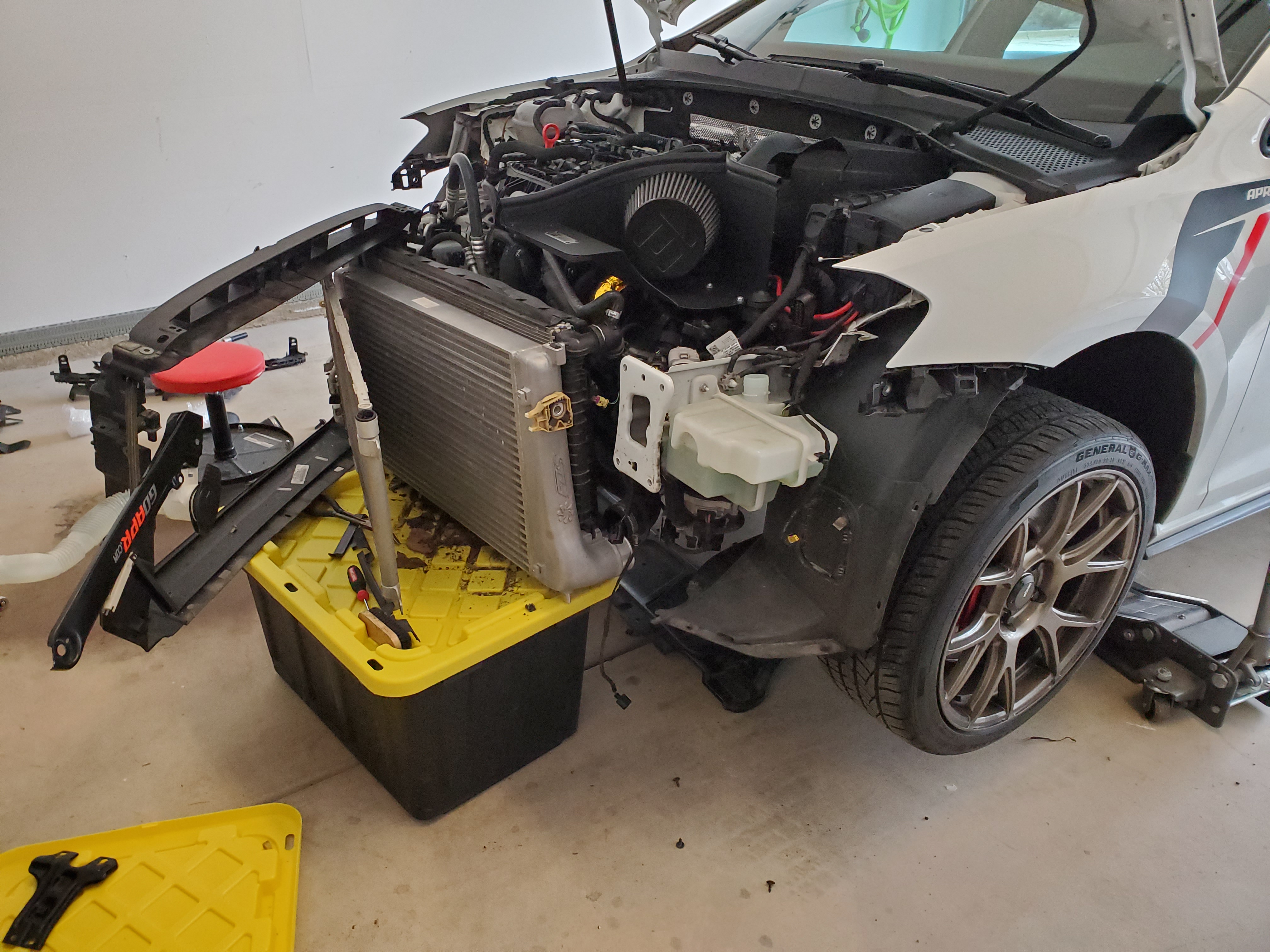 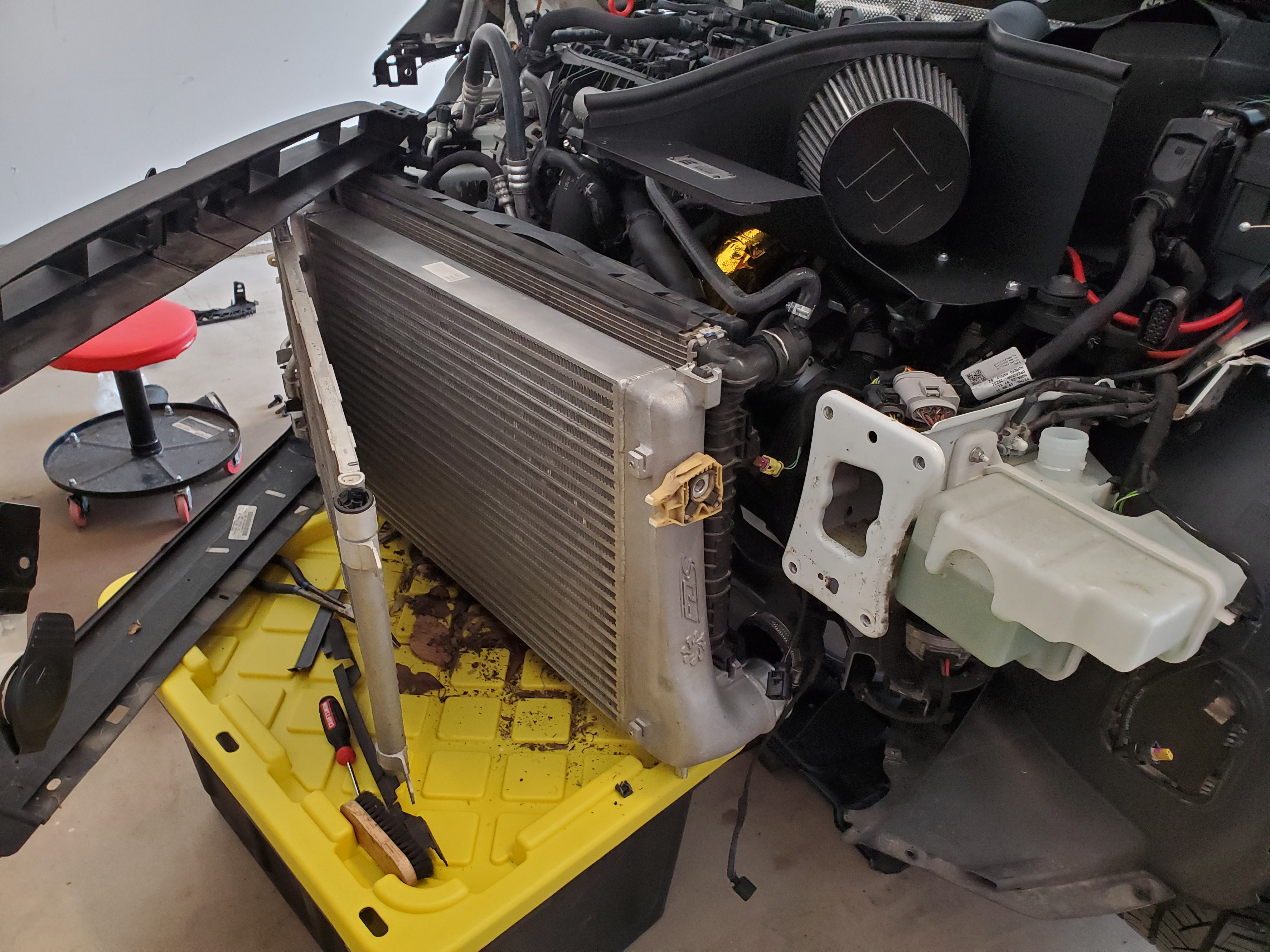 did a stud conversion and yellow fog light covers.

Pretty pleased with the outcome for both - the studs i got came with an insert to use a hex key on for tightening; i broke both of my hex keys by the last bolt trying to tighten them enough; would recommed getting two shallow open lugnuts for anyone attempting this but i had none on hand. that said, everything is plenty tight and has some red locktite. Needless to say, very happy i'll never have to mess with lug bolts on this car again! Also love the subtle look; i really wanted a way to add a little more red to make the bronze wheels pop and think this was a success in doing that.

The fog light covers from lamin-x are nice, but heres a few notes for anyone wanting to do them:
* If your fog lights arent brand new, any little pitting on them will show up under the film. At minimum, claybar them to get any surface stuff off; polishing the lights prior would yield better results for sure.
* If i were to do this again, i'd get the full covers, not the little squares that go between the 'fins' of the foglight. Even though the squares are designed to work them in between the fins so you don't have to remove the foglight, it was a pain in the ass and i wound up removing the foglights to do it anyway (also so i could effectively clean/claybar the lights). And that said, the squares don't 100% cover the areas needed so you will still see a little bit of white light on some edges no matter what you do. SO, youre better off just getting the full covers either way.
* I wish you could just replace the bulbs in these sealed foglights because though the light output with the film is pretty nice, still bright, and yellow (just a hair 'green' tinge as some have mentioned on this board), i don't like the look of the yellow film and would have rather actually tint-filmed them black and had actual 3000k bulbs whenever i turn them on. But whatever, it's all good i guess. Ricer dreams still achieved lol.

Pictures of studs here, before i did the yellow lamin-x. See bottom pic only for that 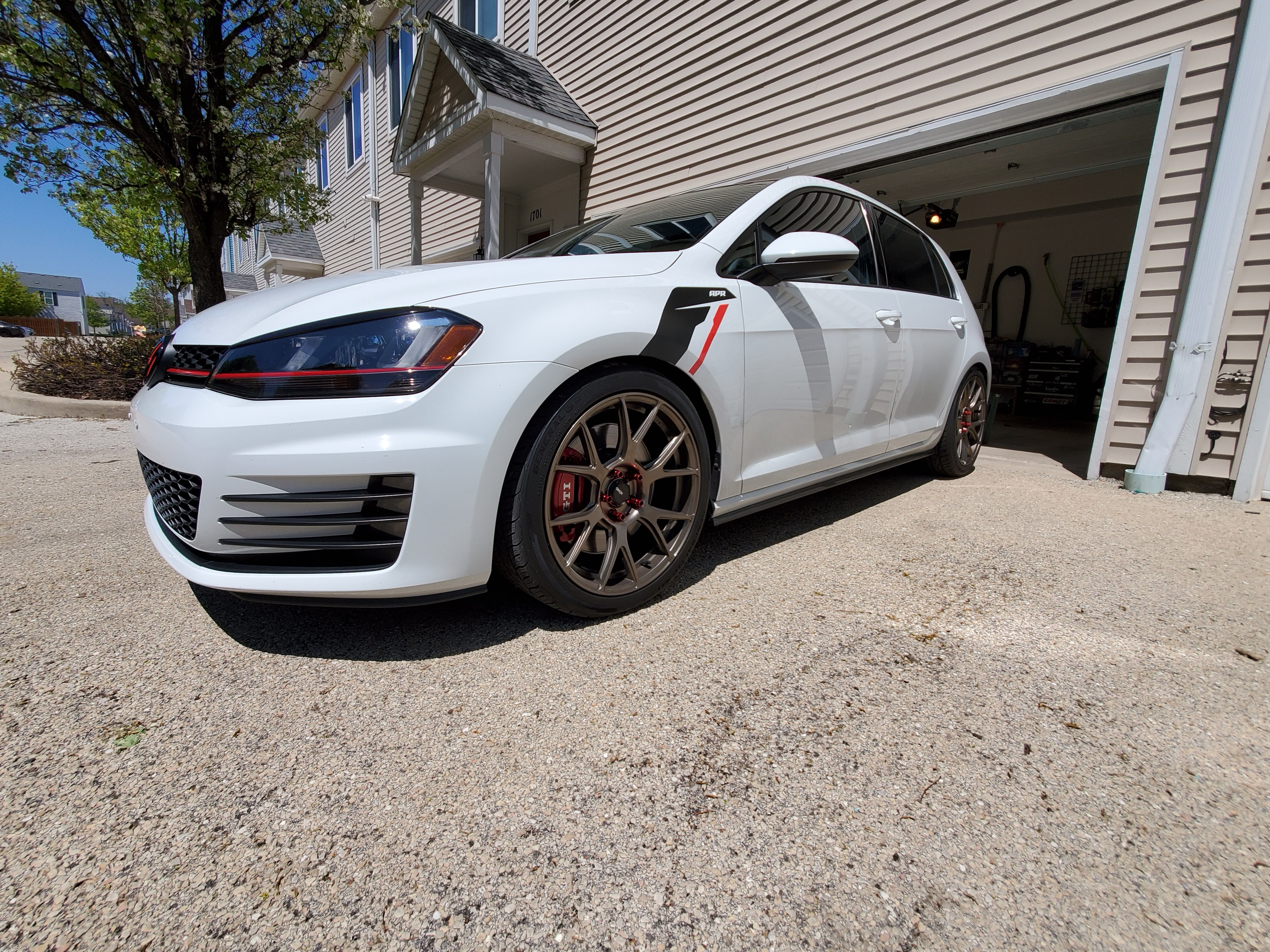 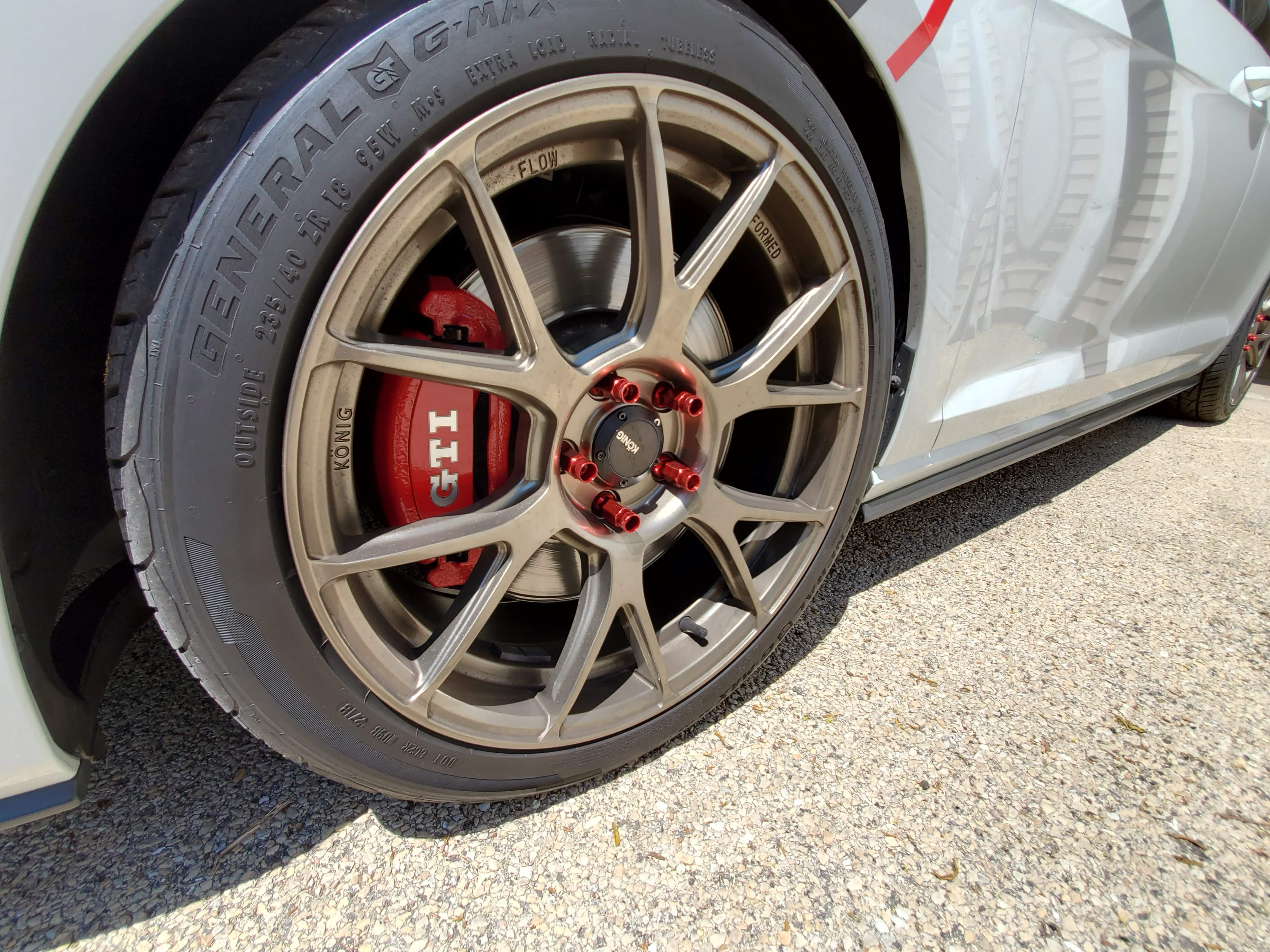 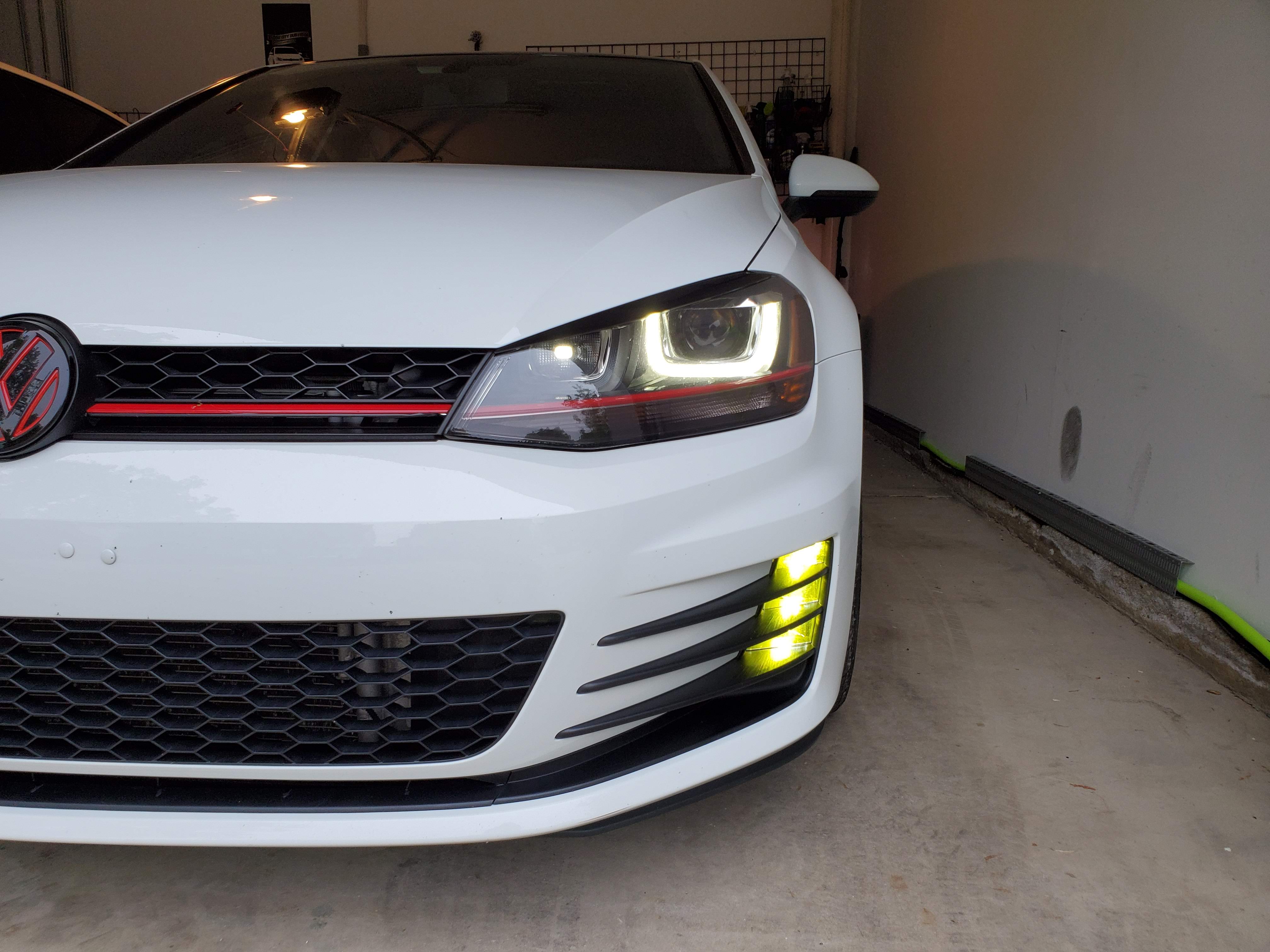 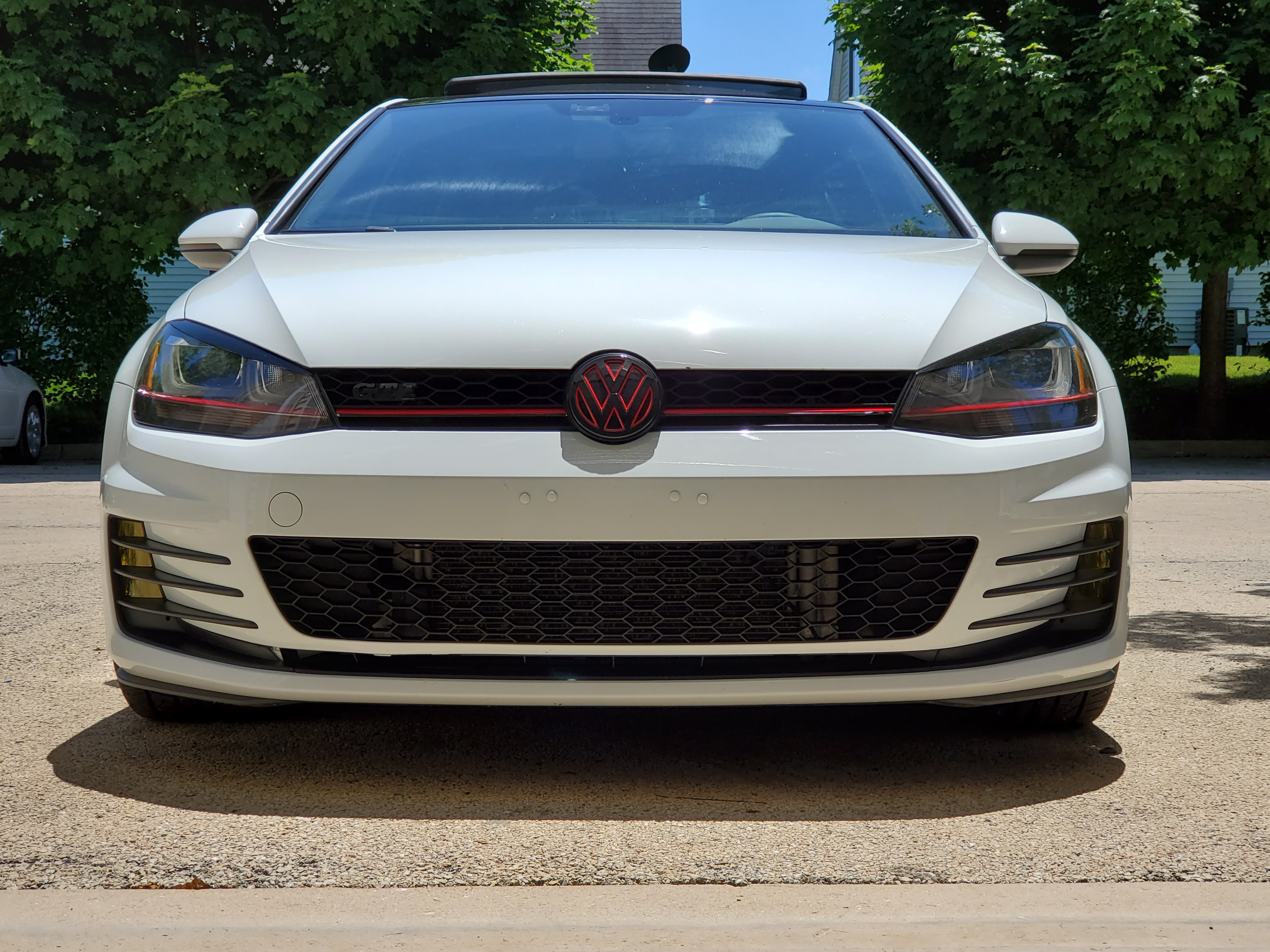 so far it's holding up fine; only been around 5000 miles since i got the car/tuned it. at ~67k now i think though so it's lasted the whole life of the car plus me for about 9 months haha
Last edited: May 31, 2020
My 'build' thread

Washed em both today! The 6 needs new foglighrs, a euro lip and maybe projector lights desperately lol. Im mad at myself for unmodding the exterior 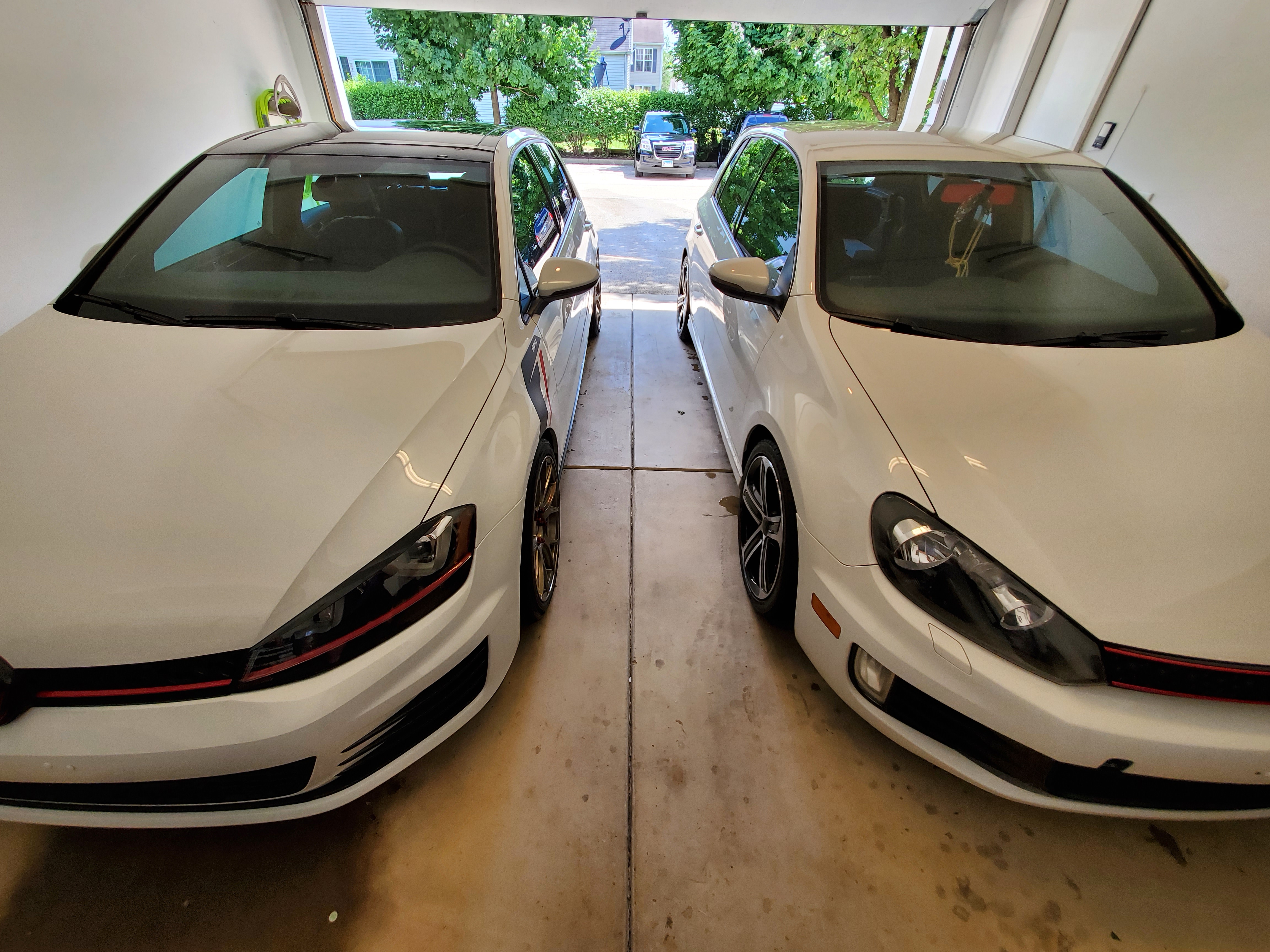 Not positive if i recommend these tips, atleast not by tightening with the supplied clamps. All the way down and i am not confident they will stay on forever, you can still wiggle and twist them around without too much effort. They also seem to rub against the lower plastics. Other than that, pretty easy install; you def need an angle grinder to get the oem tips off. If i like them after a few weeks ill probably have a shop cut off excess pipe that i dont want and tack weld them on in a set position. The quality of the tips seems OK, but i wish they had thicker walls. The overall shape aint bad.

Lastly i seem to have put myself into a clusterfuck. I wsnt to install an APR boost tap (that you pierce the manifold with) and using the supplied piercing tool, i got it in (yes, warm engine after a nice long drive) and i cant for the lofe of me get the piercing tool out! It is IN THERE. Any tips? Im thinking ill have to grind some edges off it so i can work a wrench on and wiggle it off, or take it for a long drive again and hope everything is soft enough to work it off. 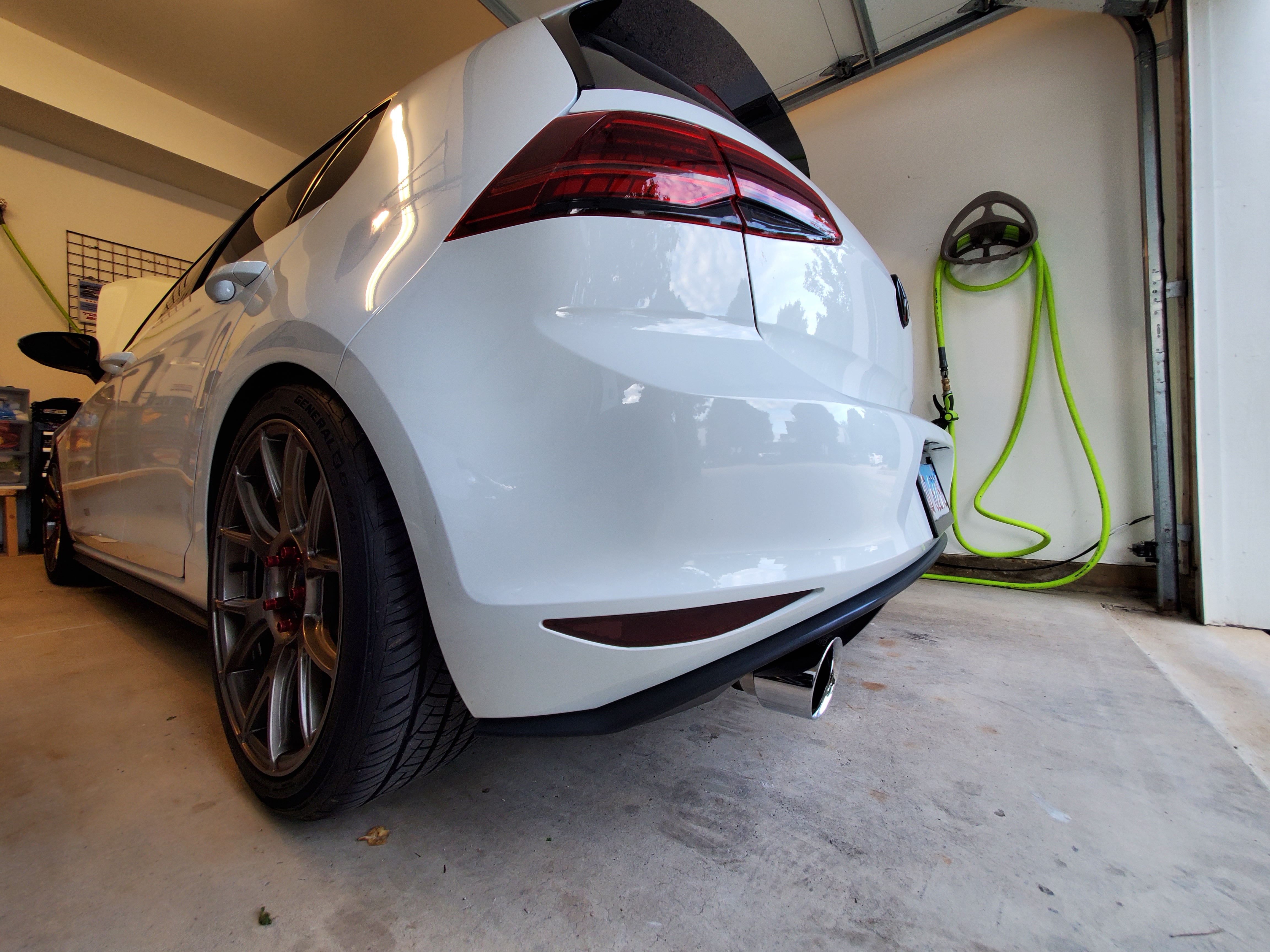 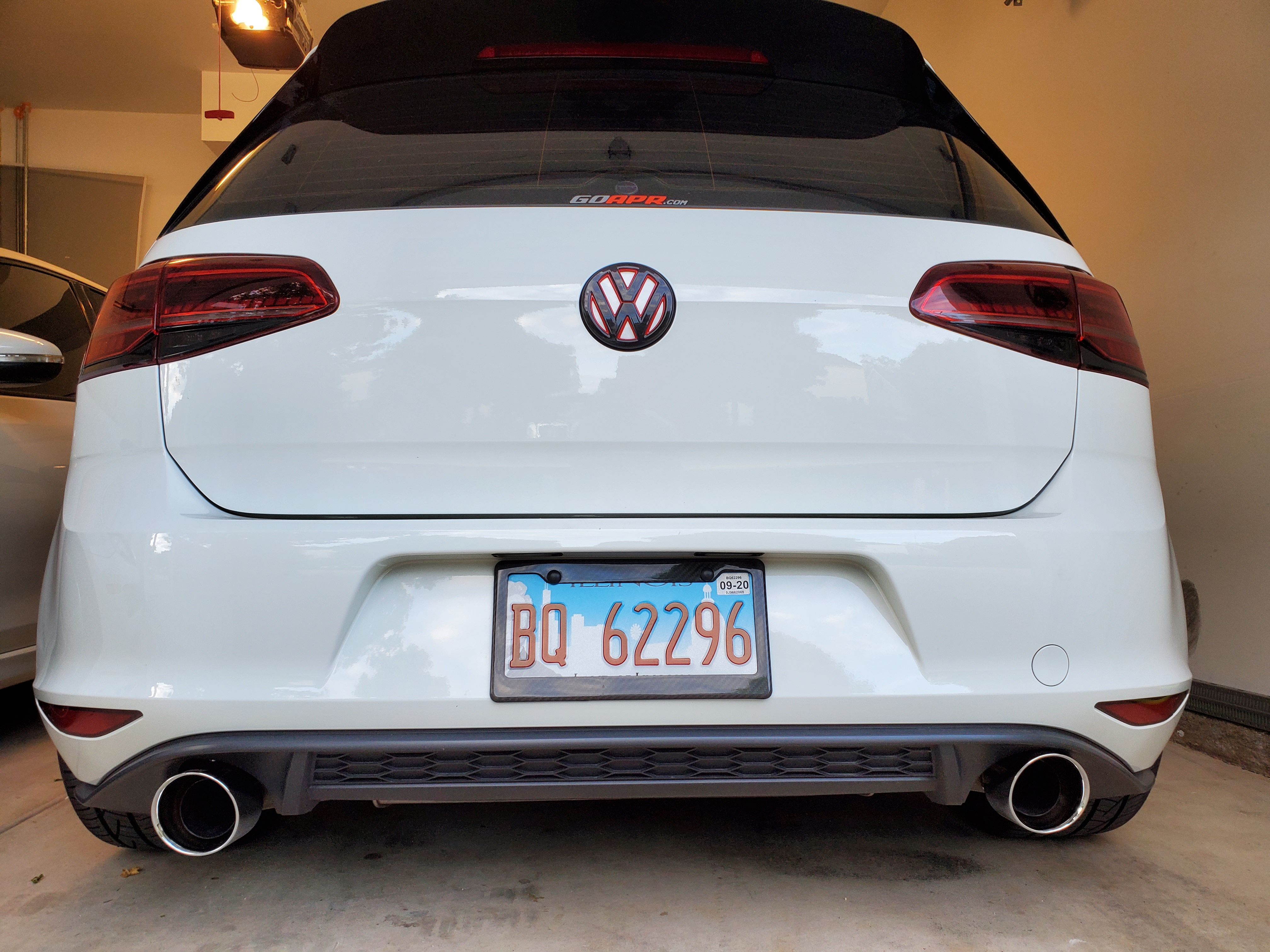 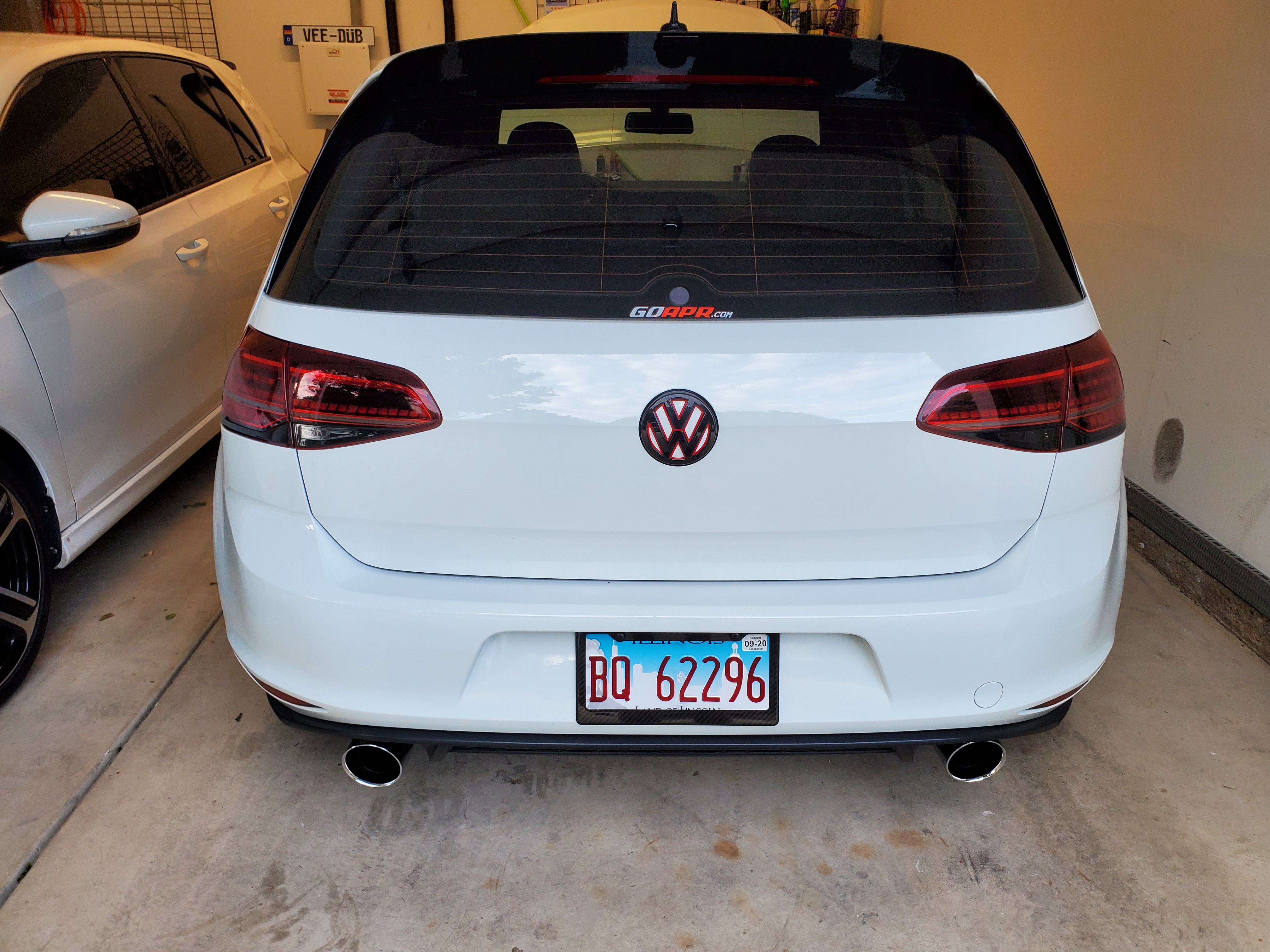 I found some water somehow collected on my rubber floor mats that i keep over the rear hatch floor. I have two guesses to what it could be related to that i will need to address:

The rear hatch lid 'drain' that goes from the emblem to desd center bottom of the rear door os not present. Maybe i lost or broke it when removing my rear wiper, should be fun to replace

Just to be sure, does anyone know if the sunroof drains go back there, or if there is a sunroof drain blockage, can water find its way back there? Seems like a stretch but also a common problem.

Seemed like my roof and the rest of the hatch area was dry so its odd that the water found a way to get just on the rubber mats; maybe it all had simply dried before i discovered.
My 'build' thread

Found a nice phone holder fknally for anyone interested. The clip portion is actually cranked down onto the vent rib so it shouldnt go anywhere.
https://www.amazon.com/gp/aw/d/B086X3B2QF?psc=1&ref=ppx_pop_mob_b_asin_title 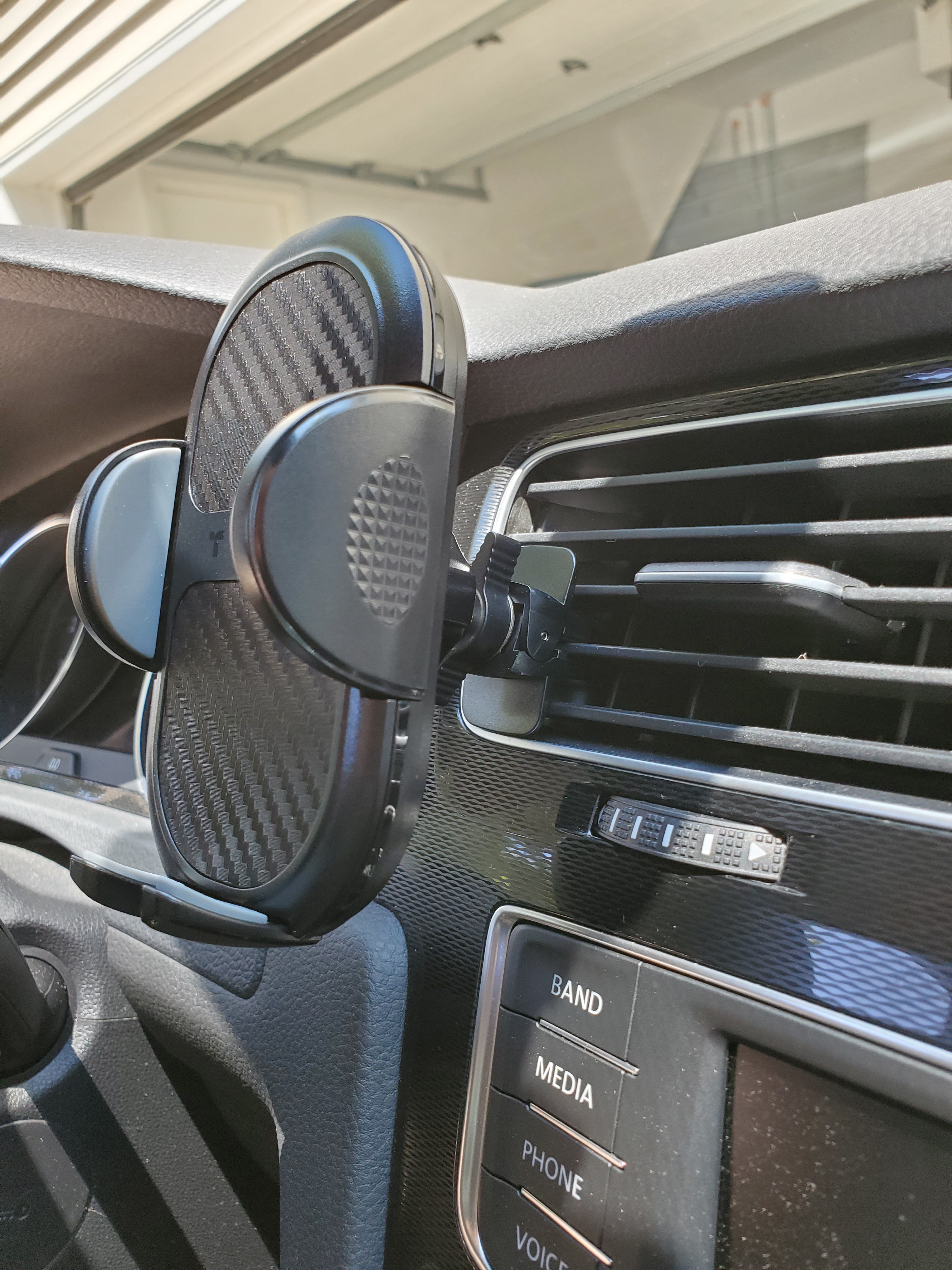 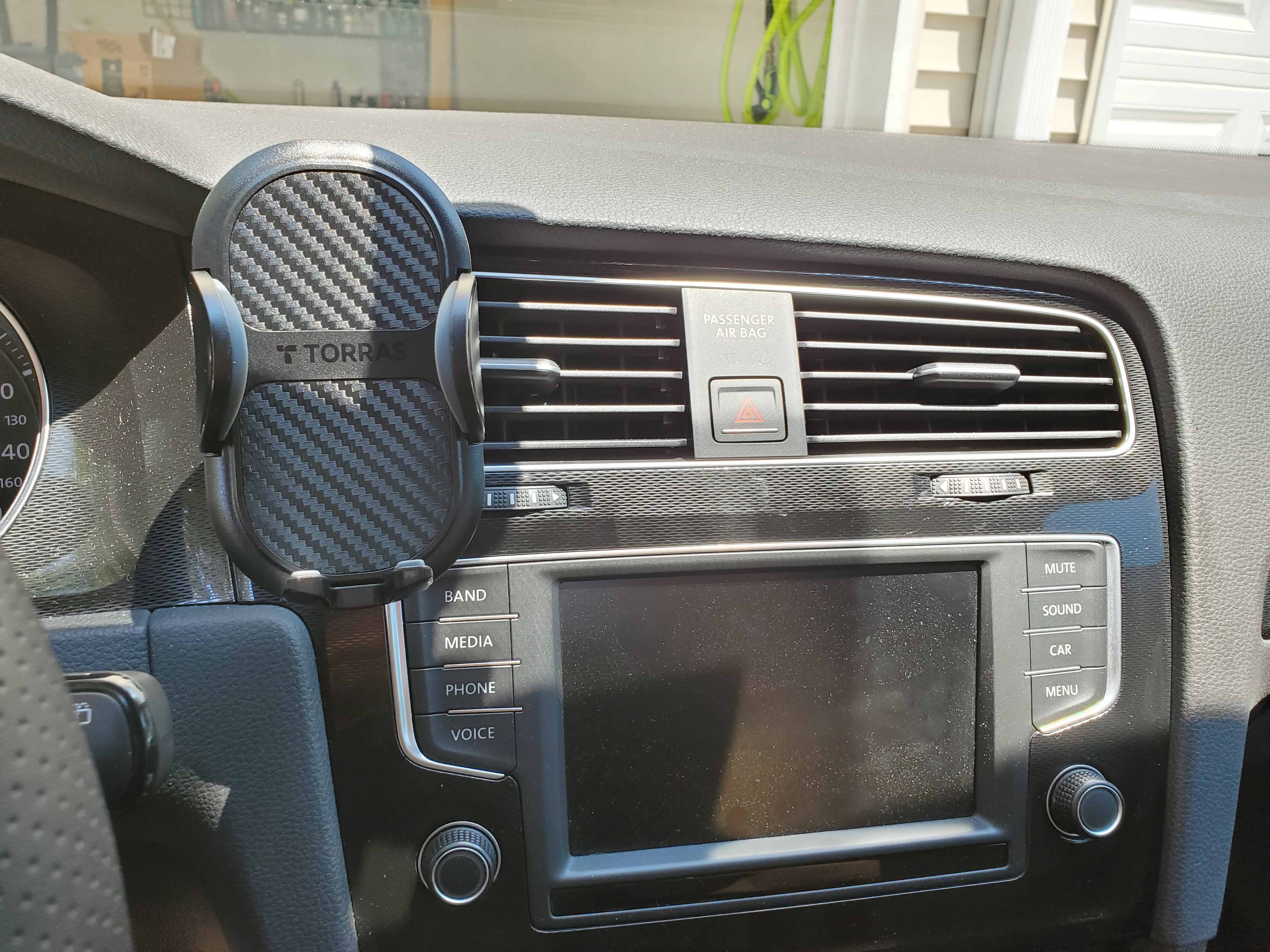 time to get rid of exhaust drone. I ordered the popular vibrant resonator (17930) and plan to take the car to GRDtuned to have that welded on, get my tips welded on, and upgrade to a stage 2 low torque tune - would be nice to trade 20 wtq for 20 whp, maybe prolong the clutch some and gain some top end. Will maybe go for the exhaust pops and bangs lol

Also, i took a stab at fixing the roof leak issue and so far all seems to be well. used some old headlight butyl sealant around those finniky grommets between the hatch door and hatch.
My 'build' thread

Found out my 034 engine mount is separated the rubber from the steel. Ordered a bfi stage 1 to solve the problem. PSA, appears this is a common issue with the 034 mounts. I bought mine used so im SOL from getting 034 to fix the problem.

Also ordered the rear suspension damper, excited to quiet down the road noise a little more!

Might go stage 2 asap before apr doesnt offer the tune anymore and have the shop weld in my magnaflow resonator to cut down awe downpipe drone a bit. 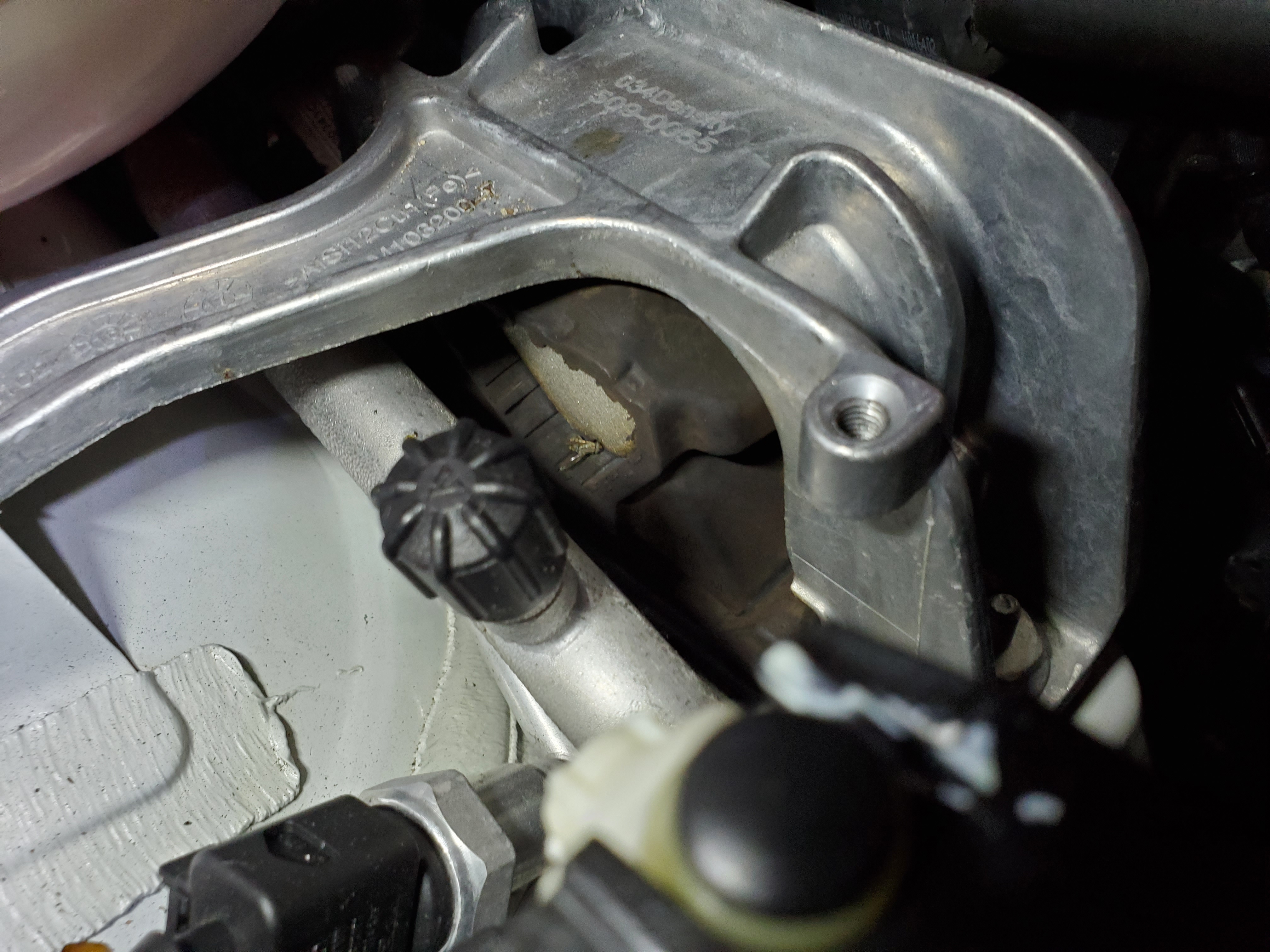 same thing happened to mine twice