The AliXpress kit came with 3M doublesided tapes. I dont think they will do a good job., initially used the tapes., but within 2 weeks of install, 2 of my sensors popped in. I had to then use 2 part epoxy (JB Weld Black) on the brackets., its been 2 years now and is still holding good.

I was in the VW/Audi dealership the other day and all the newer cars have the angled sensors at the rear side as well.

Anyways, any answer to my MMI question? How do you have 6 sensors but the display only shows 4?
C

Fraysa said:
... Anyways, any answer to my MMI question? How do you have 6 sensors but the display only shows 4?
Click to expand...

Aren't the fender sensors only used for parallel parking assist? If so, that behavior makes sense to me. Four sensors front and back are shown on the MMI to warn as you get close to obstacles in front of or behind you. The car can't really move in the direction that the fender sensors face, not without also moving forward or reverse.

Cuzoe said:
Aren't the fender sensors only used for parallel parking assist? If so, that behavior makes sense to me. Four sensors front and back are shown on the MMI to warn as you get close to obstacles in front of or behind you. The car can't really move in the direction that the fender sensors face, not without also moving forward or reverse.
Click to expand...

In the MMI screen I can see 4 sides: front, back, and two sides.

The rear sensors have 4 lines, even though there are 6 sensors. The side sensors are showing on the screen as the outer lines, so that doesn't make sense to me.

A quick update: I received the PDC bracket yesterday (P/N 5Q0937503A). Took some pictures for reference if anyone needs it: 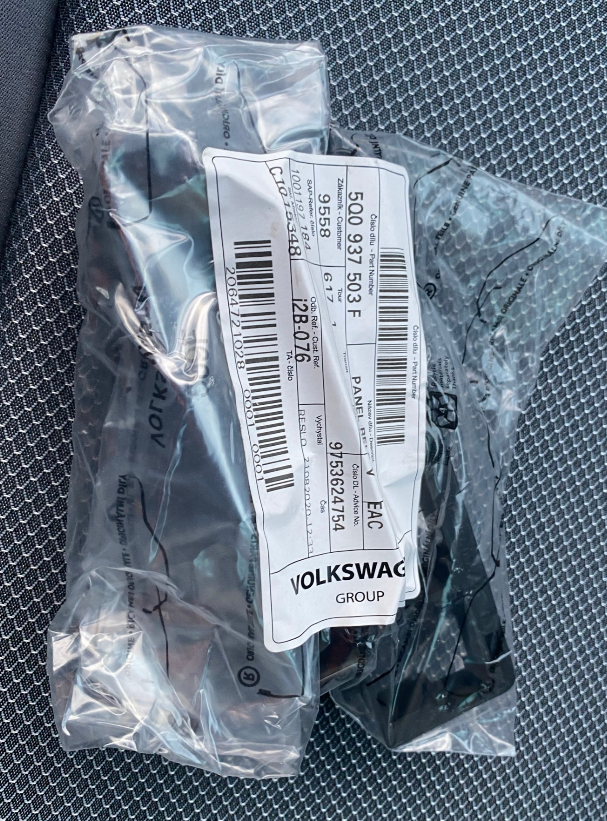 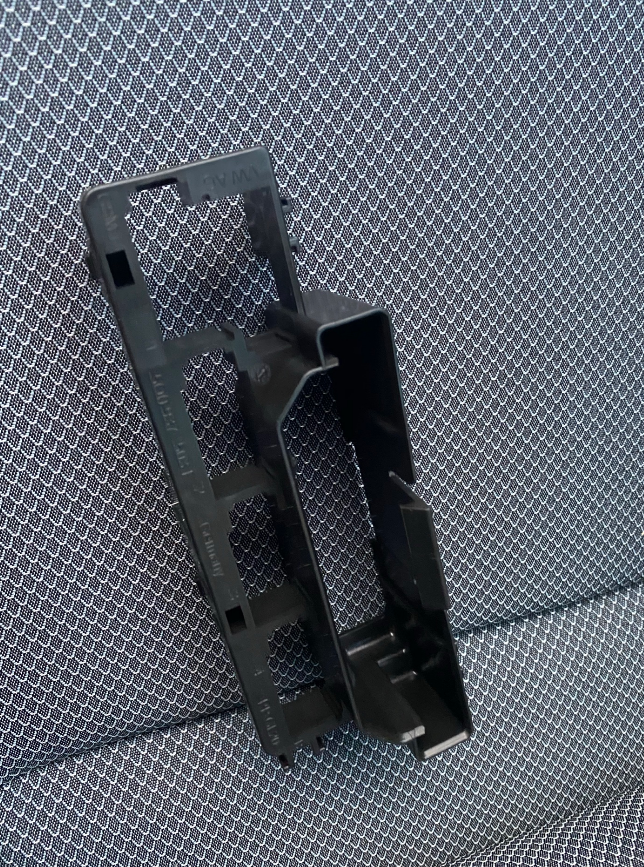 And this is how the PDC module sits inside it: 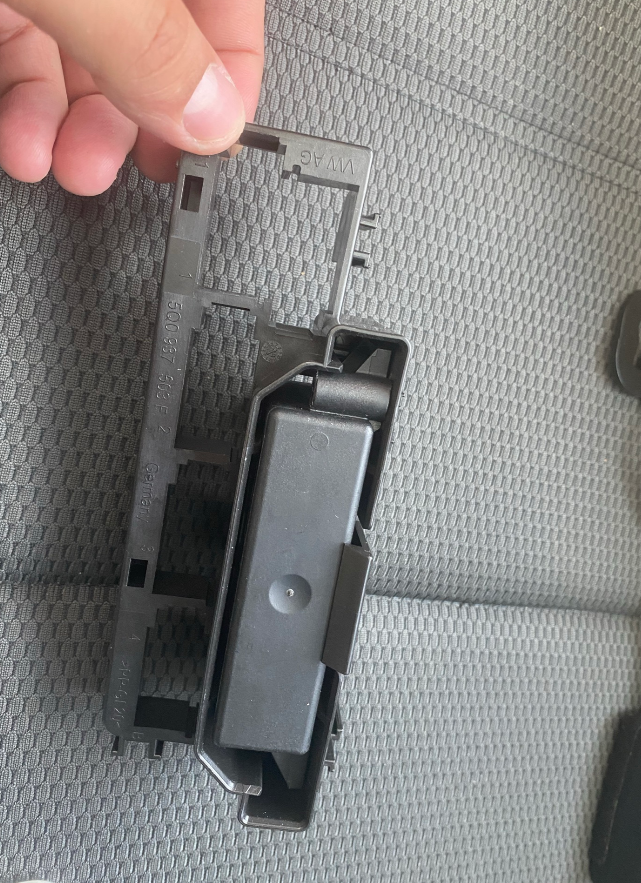 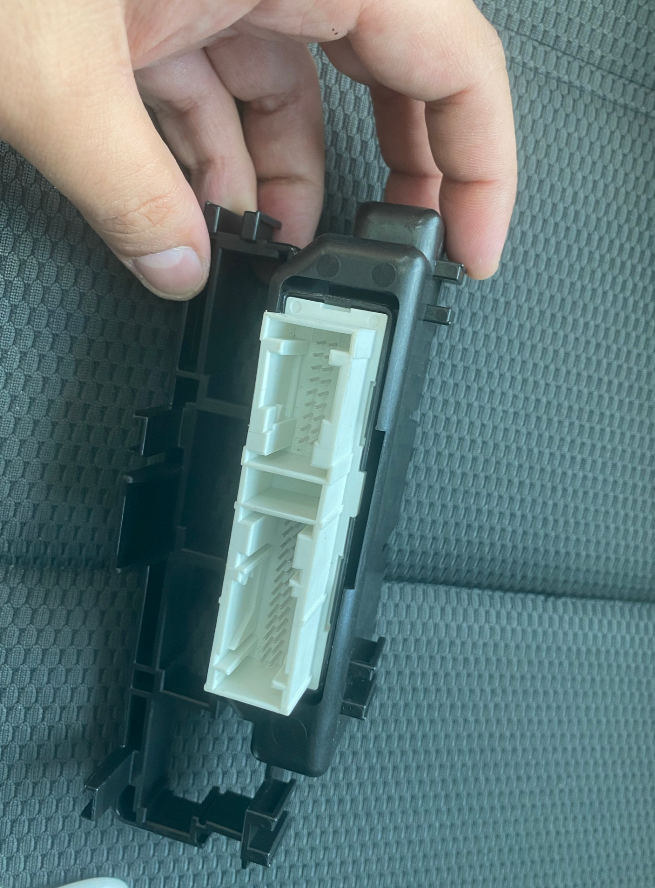 It seems this bracket isn't specifically made for PDC, but for other electronics devices as this looks to be pretty generic and has more holes.

It should clip to the PDC location under the steering wheel without any screws, but I've yet to try as I don't know the exact location for this.
O

I ordered the same bracket as well, but never installed it., getting under the steering wheel area is a pain in the butt., so just used a double sided velcro and stuck the PDC module in there. Will install it someday. I think it clips on somewhere in there...

Received the 27mm punch from AliExpress yesterday, the 18mm is still on the way. For the 18mm I used the Skoda genuine part (BEA0000001) as the price was the same.

In this weekend I will install the PDC module with the bracket and route the cables correctly this time and document my process here in this thread.

Hopefully my documentation is helping someone .
L

Fraysa said:
Hopefully my documentation is helping someone .
Click to expand...

I am certainly watching this. This is something on my to-do list sometime next year.

lijetta18t said:
I am certainly watching this. This is something on my to-do list sometime next year.
Click to expand...

Glad to hear that!

Look forward for my next post, it will be a big one .
C

I'm in work on this too, I'll post what I have found regarding the orientation of each sensor this weekend... it does matter, haha.

Interesting.
Orientation is indeed something we never discussed. Please do your best to include this if you can. I already made my rear sensors wrong, I don’t wanna get the front wrong too.
C

As you can see in the second thumbnail from my last post, the front fender sensors can only go on one way, and the bracket for those is angled appropriately.

The two outboard front bumper sensors should have the connectors facing inboard. There is large frame/bracket in the bumper (holds the fogs, or covers if you don't have fogs) and if the connectors face outboard they will interfere with this bracket. I initially had these connectors facing outboard (based on a general system picture in the Erwin manual) but I realized it was wrong when I put that frame back in. The frame has to come off in order to install the fender sensors.

The two inner front bumper sensors should have their connectors facing outboard. The foam on the front crash bar has a molded recess to allow for the sensors and the harness. The connectors must face outboard to fit in that recess, assuming the foam to bumper clearance is tight.

I will take some pictures and add them to this post later this evening.

So, an update on today's progress.

I started with the PDC module bracket. Using a YouTube video, I found the exact location of it. It's supposed to clip into the side of the BCM plastic holder. However, I had an issue - the bracket was too big to fit as there was a huge black/red cable around there that I didn't wanna temper with. I ended up cutting the excess plastic around the actual BCM holder, so I was left with something like this (notice I marked the two tabs that needs to slide in): 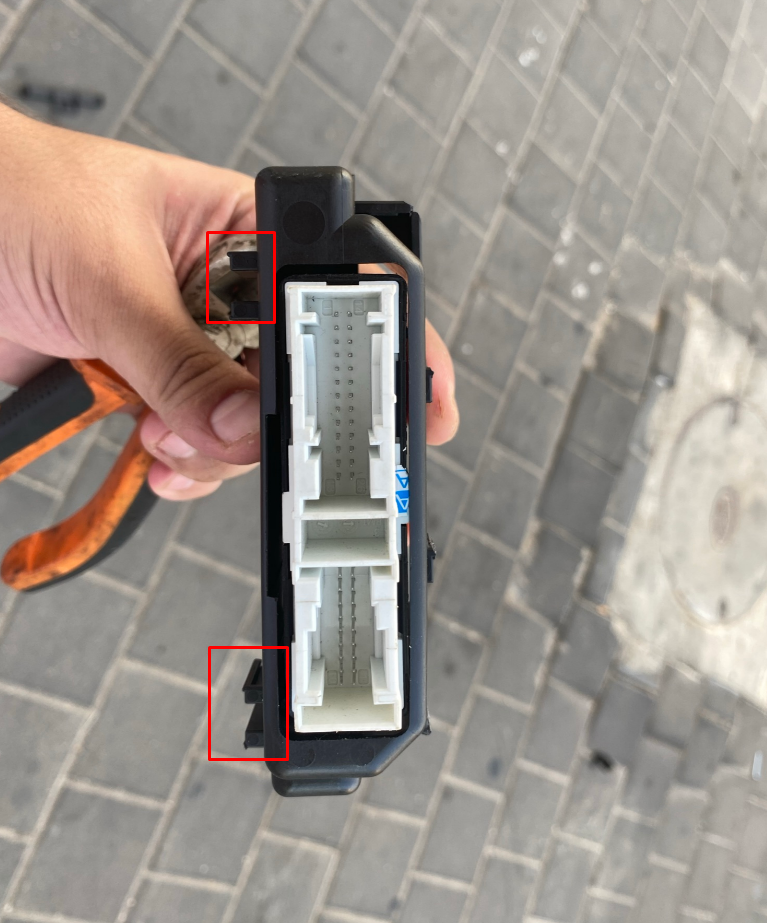 Unfortunately, even after cutting it, I wasn't able to slide it in the designated place. It seems the holes are smaller than the tabs on the BCM module bracket, which doesn't make sense to me. I ended up using double sided tape for now until I figure out how it works. I took a picture - you can see the marked tabs where the bracket should slide in, they're perfectly aligned with the bracket tabs: 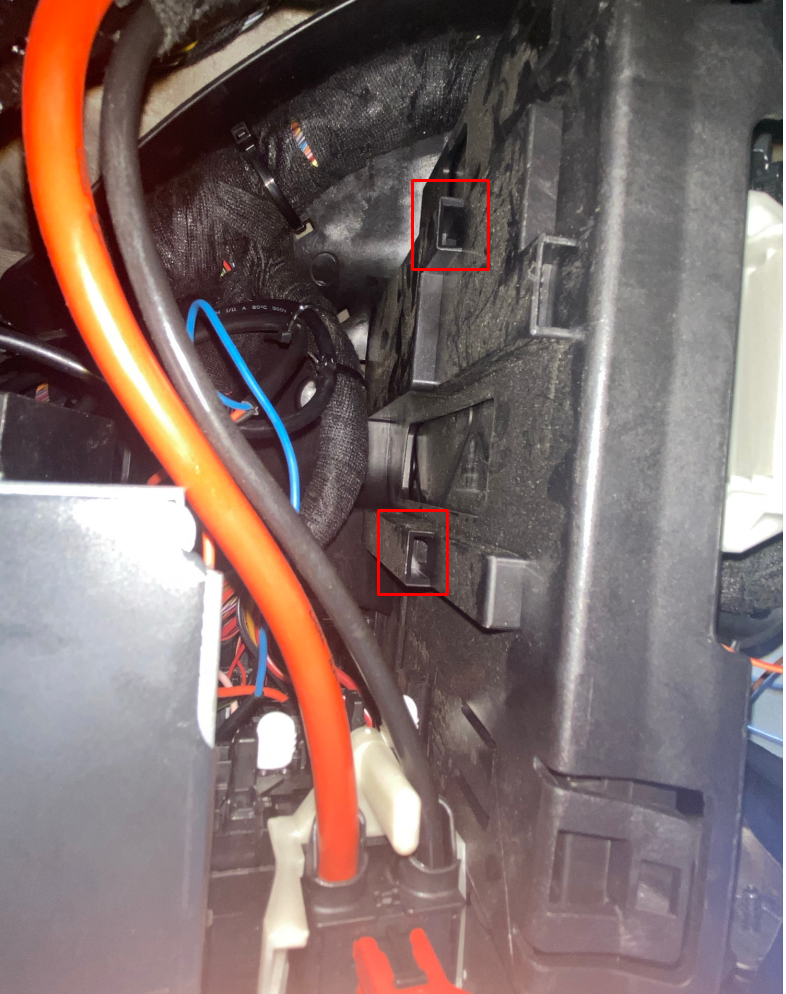 I also found the proper location for the speaker this time.
I took a picture so you guys can see. The speaker fits right there as the holes align with the holes on the metal. I used one rivet I found laying around there to hold one side which works for now, but I'm sure the original one uses two OEM rivets specific for this. 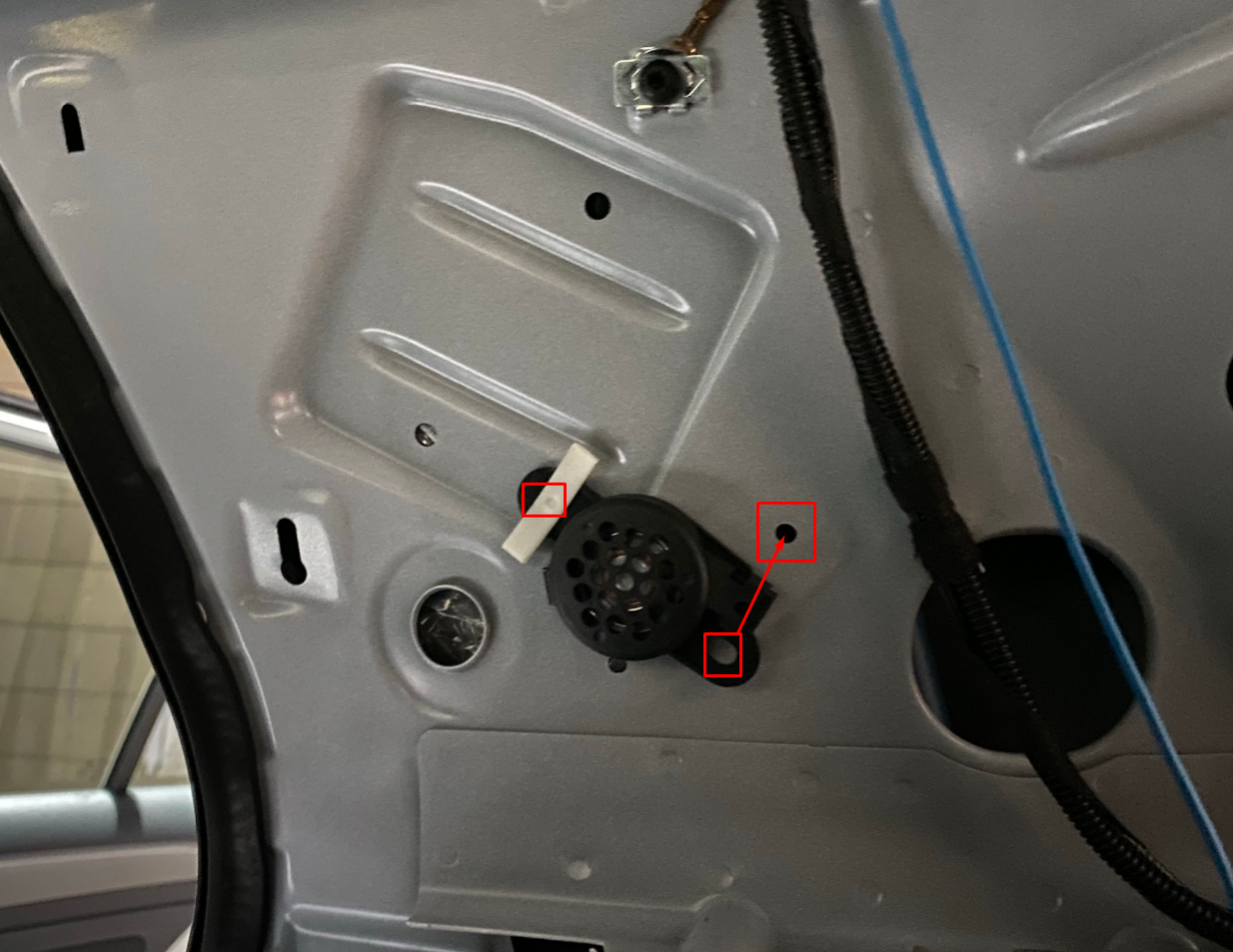 I left the wiring loom for the rear sensors disconnected as I need to drill another 2 18mm holes for the side sensors and my cutting device still hasn't arrived.

If anyone knows the location of the front buzzer, that'd be awesome.

So both the Spanish guide and the polish carsystemS PDF say to route the loom in the left side?! It doesn’t make sense to me as the erwin portraits show the speaker on the right.
Can anyone confirm this once and for all?!
C

If the Erwin manual has it on the right and, and the speaker mount is on the right that's where I would put my trust.