JJ_MK7 said:
Can you show an image for reference on these pieces that are not supposed to be removed? I think I know what you are referring to but just want confirmation .
Click to expand... 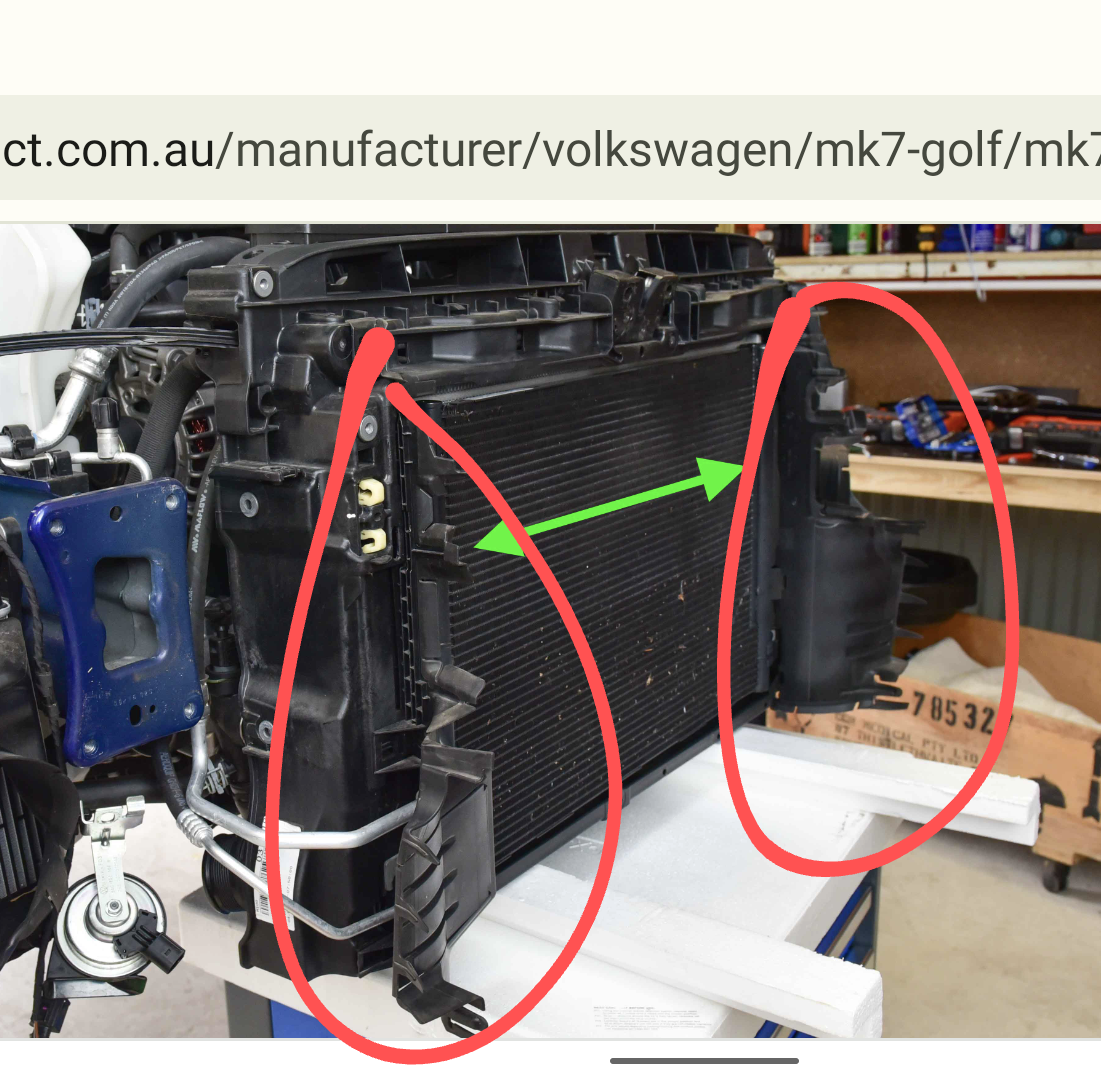 It's these large plastic air dams that I've circled in red. They are held on by 3 clips. Very easy to remove and add back without breaking their retaining clips.

Also, on my GTI, behind the AC condenser, I had also had these like "miniature" air dams which I believe served as thin rubberish seals that's go between intercooler and condenser, and those barely fit my new intercooler though--I tried my best to realign them on my new intercooler, using a photograph I took before disassembly of the oem setup as reference. I didn't see these seals mentioned in any of the videos or tutorials I came across.

Lastly, you might have to trim the large plastic air dams a little bit b/c some aftermarket intercoolers are wider than OEM and so the air dams have to be modified. I did not have this issue myself. 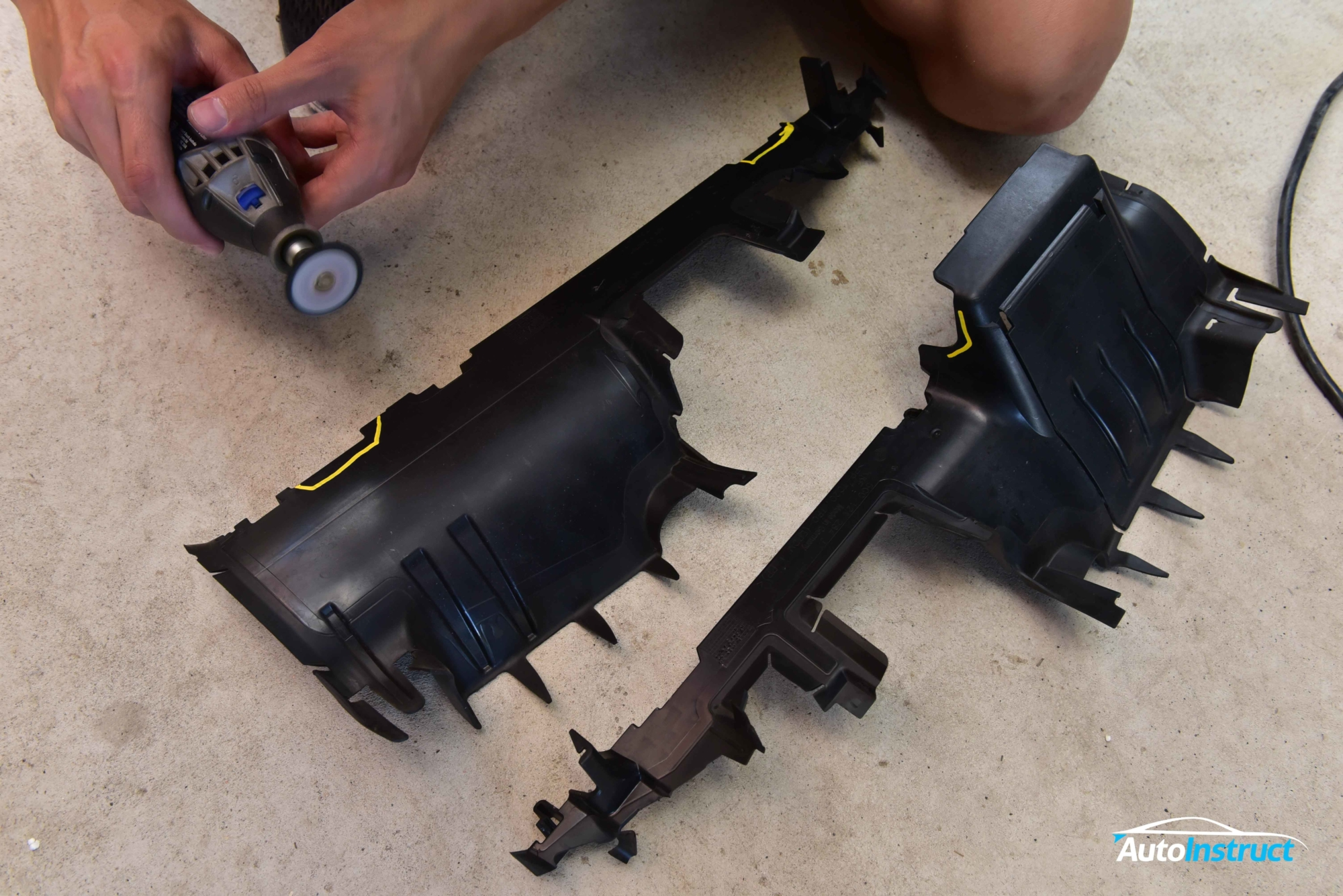 It's these plastic air dams that I've circled in red. They are held on by 3 clips. Very easy to remove and add back. On my GTI, behind the AC condenser, I had a thin rubberish seals that's went between intercooler and condenser, and those barely fit tho.
Click to expand...

Nerdy. Oreo said:
im honestly just going to buy a bunch of'em before doing it so i have backups
Click to expand...

You won't have any issues with the air dams...a thin flat screw driver makes quick work of them. I would definitely buy replacement yellow clips though. I did so myself in case I either broke them or got frustrated enough that I wanted to cut them off and replace etc. Cheapest place to get them is at FCP euro (about twice the price of china direct) if u dont want to wait the month long shipping from Ebay/China. They are def hard to unclip. https://www.fcpeuro.com/products/audi-vw-radiator-mount-rein-5q0121367e

Just so you know, the clips that I personally broke were the cover to my hood latch cable (everythingCPO's video zooms in on this area pretty well)...I broke the clips on one side that I couldn't see when I went to open up the the cover (didn't realize it had clips on both sides of the cover). I thought the cover was made out of metal, so I was a bit rough with it...it's plastic of course. My recommendation is to fully loosen up the metal core support brace that this plastic hood cable housing resides ons, and then manipulate it so you can have access to both sides of the housing cover's clips. You don't actually have to undo the entire housing from the core support brace afterwards....some people did, but I didn't want to ham fist it break more stuff. If you break the cover's clips like me, a zip tie will be your best friend to keep the cover closed, which is absolutely necessary to keep your hood latch cable working correctly---if that cover pops open at any point while your hood is closed, then that silver ball at the end of the cable will pop out of its groove, rendering your in-car hood latch unlock lever useless, and then you will be living in a nightmare. 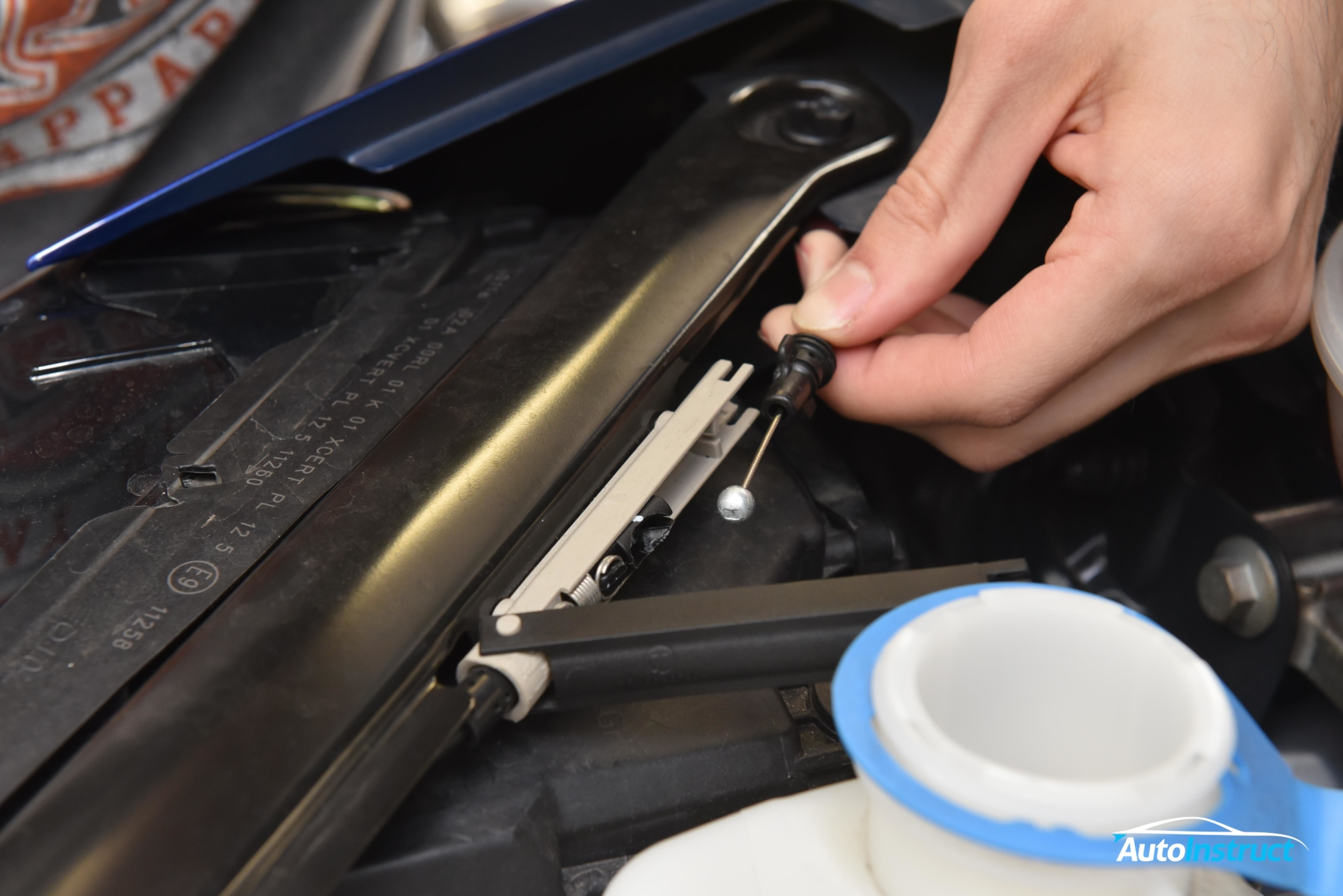 The other clip I broke was on my grill support...but that's because I stepped on it like a dumbass after I successfully removed it without any clips breaking. Don't be like me...keep a clean work site.

The second hardest clip for me (the yellow clips being the first) was the clips that hold the oem radiator to the oem intercooler. If you are going to junk your oem intercooler, then no sweat, but at the time I was trying to undo them, I thought I might either try to sell my oem intercooler or eventually put it back into the car when selling (hahahahaha, yeah right). One side came out super easy, but the other side was tough as nails. I had to shave down the male side of the clip on the oem radiator (the female side being a loop attached to the top of the OEM intercooler). I could tell that I wouldn't have been able to release the male side through female side without breaking the female loop...maybe the result of just a little excessive plastic on a bad mould job of the male side of the clip. I used an exacto blade and removed just enough of the edge of male side of the clip to help enable release. You don't want to take off too much, or else this male clip wont fit tightly into your new aftermarket IC.
Last edited: Feb 18, 2022
APR Stage 1 | IE IC | MST CAI/TIP | BFI Engine/Trans/Dogbone Mount | Remus CBE | Eibach RSB | Moog Endlinks |
V

kc10131984 said:
The other clip I broke was on my grill support...but that's because I stepped on it like a dumbass after I successfully removed it without any clips breaking.
Click to expand...

LOL, yeah some of the clips are so tiny they're easy to bend and break just by looking at them! Stepping on them they're for sure gone!