I blew my engine, here's some info about it

Hey guys. I haven't been super active on here other than buying a couple parts from the classifieds section, but I scour the forum all the time for information. This is the first post I'm starting and it's not one I wanted to make...

I have a 2016 Golf Highline 5MT with 151xxxkm, with the APR Stage 1 87 Octane tune, Injen intake, and a couple other small modifications that aren't engine related. During the heatwave this summer I took a small road trip, about 270km each way, which ended up killing my engine. During the roadtrip I had zero issues engine-wise. Power was good, no strange noises or anything, oil and coolant levels and temps also normal. However the few days after returning were met with increasingly bad misfires. The day after coming back from the trip I noticed a slight hiccup occasionally at idle which completely went away as soon as I started driving. The day after that, the idle was a little more lumpy. The day after that I had a check engine light for an intermittent misfire on cylinder 4 and I noticed a slight hesitation right after taking off. The day after THAT, I started the car and it felt like I was pretty much down a cylinder. It vibrated quite heavily during a short drive around the block and the EPC light turned on. I then parked it in my garage to start digging into it.

My mind went straight to either a bad spark plug or an injector that was slowly clogging or going bad. Pulled all the plugs, they all looked fine but cylinder 4 was a bit wet and smelled like fuel. That immediately made me think it was an injector that was stuck open, but just for the sake of testing I put the plugs back in but swapped coils 3 and 4. Cleared codes and started it, misfire stayed at cylinder 4. The following few days I was researching and trying to figure out if it could be anything else before ordering an injector and taking the manifold off. Luckily my friend suggested I compression test it just to make sure nothing bad happened. And luckily I listened to him..... Cylinders 1-3 held about 160-175psi, cylinder 4 held 60psi.....

So then it was trying to figure out what went wrong inside that cylinder. Long story short I borrowed a leak-down tester, found TDC on that cylinder and tested it. All the air came straight out the dipstick tube/oil cap... sooooo bottom end failure.

Fast forward a bit and I got a used engine from LKQ, any replacement hardware I needed, and a South Bend stage 2 daily clutch and flywheel kit. I could tell the car needed a clutch soon so I figured I may as well while the entire engine is coming out.

Only a couple things to report during the engine swap. Here is what I found in the bottom of my oil pan in the old engine: 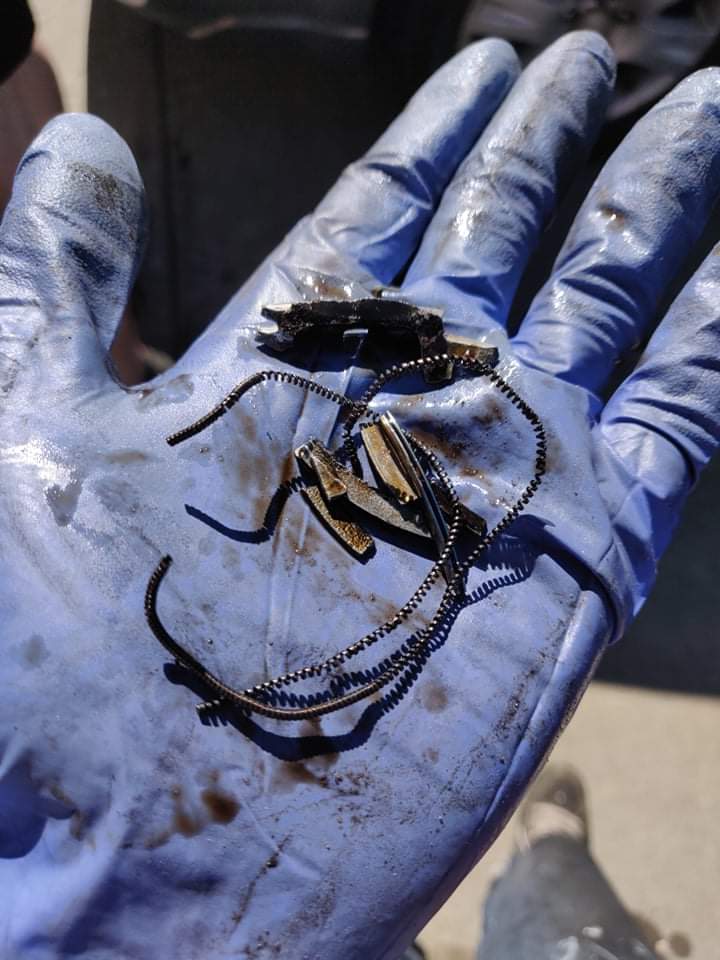 Looks like some oil control ring and ringland! Also when I pulled the transmission off, turns out my pressure plate was broken too. There was one of these "fingers" missing for lack of a better word... see how there's only 5/6 of them. Explains the reason I thought my clutch was bad! 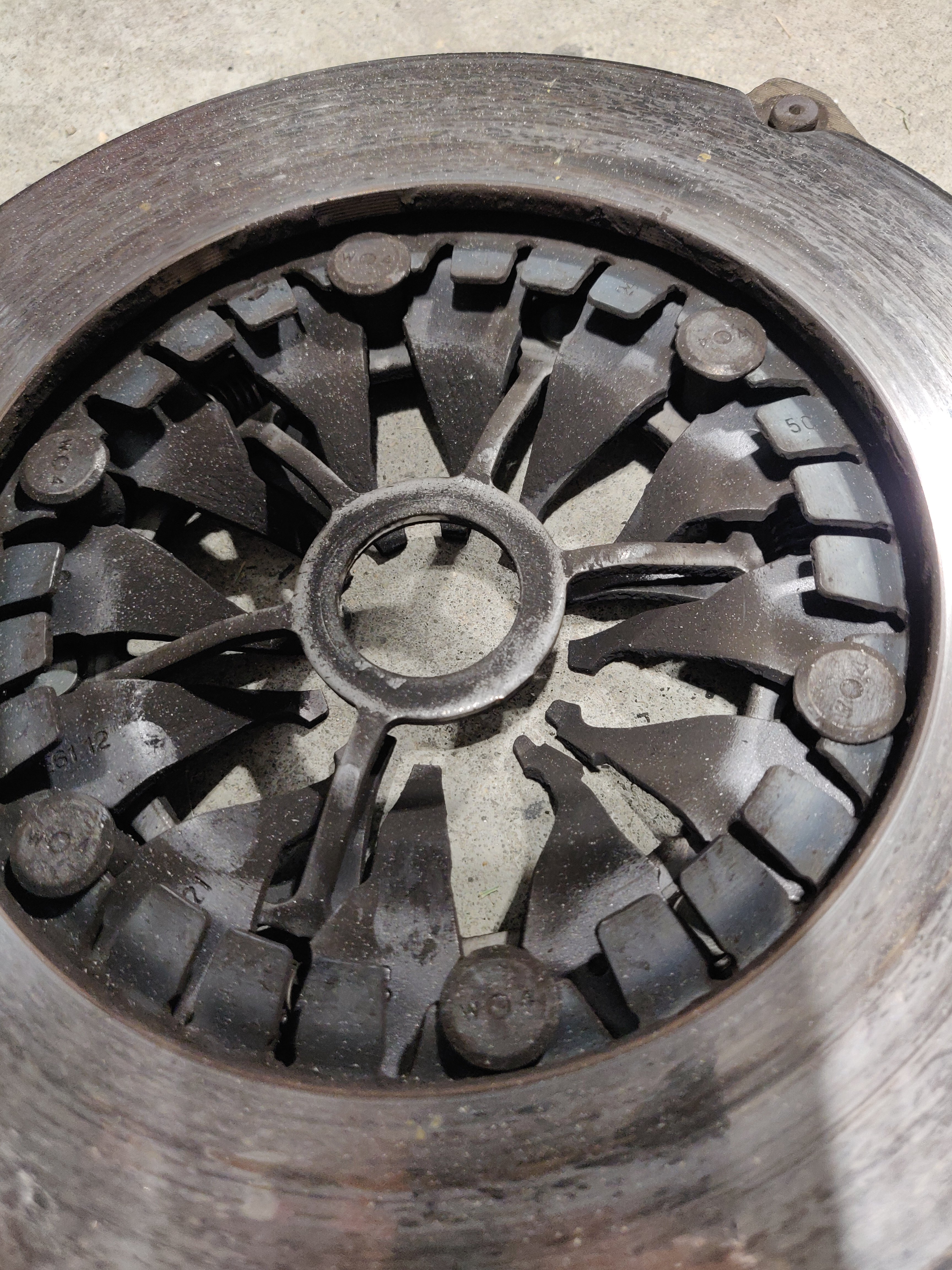 Recently I got everything back together and it's all working well. Now here's my thoughts about what happened.

In the first few lines of this thread I mention I have the APR 87 octane tune. Right as I say that most of you are probably thinking that's why my engine blew up... and you're probably right. The whole duration of the roadtrip was between 34 and 37 degrees celsius outside and constant blazing sun. That kind of heat sucks for any turbo engine. Couple that with having the A/C cranked the whole time, my less-than-conservative driving along the way, and having a stock intercooler, AND the 87 octane tune, it all starts to add up. Intake air temps probably went through the roof and the engine experienced some detonation that it couldn't pull enough timing to prevent due to it running more power on 87 octane fuel. Either that or it cooked the oil and couldn't lubricate well enough, however my oil temp gauge never went over 100 degrees celsius the whole time. Whether or not that readout can be trusted with the tune, I'm not sure.

The other thing that crossed my mind is the engine being at too high load in 5th gear. My car is the Highline model and has adaptive cruise control which I was using for part of the way. Obviously since the car is manual it can't downshift by itself, so if I'm using adaptive cruise and someone pulls to the side and I speed up, it will try to speed up in whatever gear I am in; which is usually 5th if I'm using cruise control. I try to be mindful of this and downshift to 4th or 3rd if I notice the cruise is going to speed me up, but sometimes I don't think of it or I get lazy. Part of me is wondering if this could've had something to do with the failure?

I haven't torn down the old engine yet so I'm not exactly sure if anything else went wrong but if anyone is interested I will post pictures once I do.

To summarize, I believe the tune was definitely the main reason for the engine failure. If it was stock in the same heat, it would probably fine. Likewise if I was easier on the car and not doing a bunch of passing, it may have been fine too. Now would it have held up to the aggressive driving if it was a 91 or 93 tune? Hard to say, I know people say APR aren't the safest tunes, and it definitely concerns me that their 87 octane tune makes more power than a lot of companies' 91 tunes. I'm not here to debate that, just giving information on my situation since it may be of value to someone in the future. But at the end of the day, the 87 tune + heat + extended fast driving is most likely what killed it.

Let me know if you guys have questions or want more info about any part of this process. Thanks!

Sounds like just bad luck. The oil temps were fine. Or you really did drive the piss out of it.
TPC20, full bolt ons, EQT dyno tune.
E

jimlloyd40 said:
Sounds like just bad luck. The oil temps were fine. Or you really did drive the piss out of it.
Click to expand...

Yeah could have just been bad luck too. I didn't really drive it THAT hard but where I live this is the hottest it's gotten in a long time, so that's immediately where my mind went. The passing I was doing, I would go from 100-110km/h to about 140-160km/h full throttle in 3rd gear.

I'm generally a spirited driver so before this I would accelerate hard sometimes but I wouldn't say I 'drive the piss out of it'.

What does the top of the piston look like?
droppin' farts

My "put parts on my car" thread
E

I'm not sure, I haven't taken the old engine apart yet and I don't have a boroscope. I'm definitely curious though, I wanna fully disassemble everything

Plans for the damaged motor besides tear down?

All the concern here with the octane rating and getting some detonation/knock - I don't believe that had a thing to do with this. I'm quite sure the APR tune is just fine and the octane rating of your fuel had nothing to do with this. Plenty of folks have grenaded engines the same way running 91 or 93. If you start pulling timing at some point if it gets bad enough, the ECU will richen the mixture to cool things down and if it continutes it will go into limp mode - that's how my Unitronic tune works and I would suspect APR is no different.
2018 Golf Sportwagen S 4Motion w/DSG - IS38 Unitronic ECU/TCU tunes + United Haldex tune + FBO + H&R Sport springs + Bilstein B8s + H&R RSB/APR BBK
NGK Ruthenium plugs at stock gap (0.028") b/c I like to live dangerously
Dragy 0-60: 3.91/3.66 (1')
Dragy 1/4 mile: 1.88 60'/12.10/113.44

tigeo said:
If you are willing to pay all the extra to feel better, get the 93 tune and enjoy the extra power. Your 87 tune is perfectly safe on 87 - plenty have logged them and shown that there isn't any eggerious timing correction etc.
Click to expand...

Since we are going to speculate wildly, I wonder if the high load low RPM instances OP stated happen due to the ACC could have caused detonation from the oil. This was something brought up in another discussion recently that depending on the oil formulation high load low RPM conditions can cause knock, though you would think the engine would detect it.
2017 GSW 4mo DSG | UM ECU/TCU SOLD
2016 S3 | OpenSource ECU/TCU tune soon to be running OpenFlex

Dog Dad Wagon said:
APR Plus. I will be going with a 91 High Torque tune when I go IS20
Click to expand...

ShagginGSW said:
Since we are going to speculate wildly, I wonder if the high load low RPM instances OP stated happen due to the ACC could have caused detonation from the oil. This was something brought up in another discussion recently that depending on the oil formulation high load low RPM conditions can cause knock, though you would think the engine would detect it.
Click to expand...