His and Her's wagon's

Been hanging around for a bit but figured I should start one of these..

I don't have a whole lot of photo's of it, from when I got it till now, but here's a run down of what I've done so far (that i

Within a month of buying it, I got a APR Stage 1 tune for 87 octane, shortly after for a used 034 Motorsports P34 intake, used 034 Motorsports rear swaybar, and used 18" bronze Neuspeed RSE10's. After driving it like that for awhile and a lot of commuting, I eventually got some Koni Special Actives and Golf R hatch front springs and euro Golf R wagon rear springs, and used 034 top mounts in the rear and the front mounts that add 1.4 degrees negative camber. This was a nice improvement over stock and certainly was fun! I Always wanted GTI plaid seats, so when I found someone selling some an hour away from me, I snatched them up. They were super easy to install which was nice, except for the rear seat backs, which I haven't done yet as I've been contemplating if I want to find a way to keep the remote releases or not. Also installed a 328mm Stoptech kit, wow what a difference over the stock brakes!

The car was as described above for awhile with no changes, save for (I can't recall who makes it..) one of the kits that is supposed to stiffen up the rear subframe which I installed last year, and recently a Golf R rear diffuser, soon to add Magnaflow 14416 mufflers and some quad tips.


Just recently I decided that I wanted some better suspension as the Koni's kinda fell apart when driven hard, so... 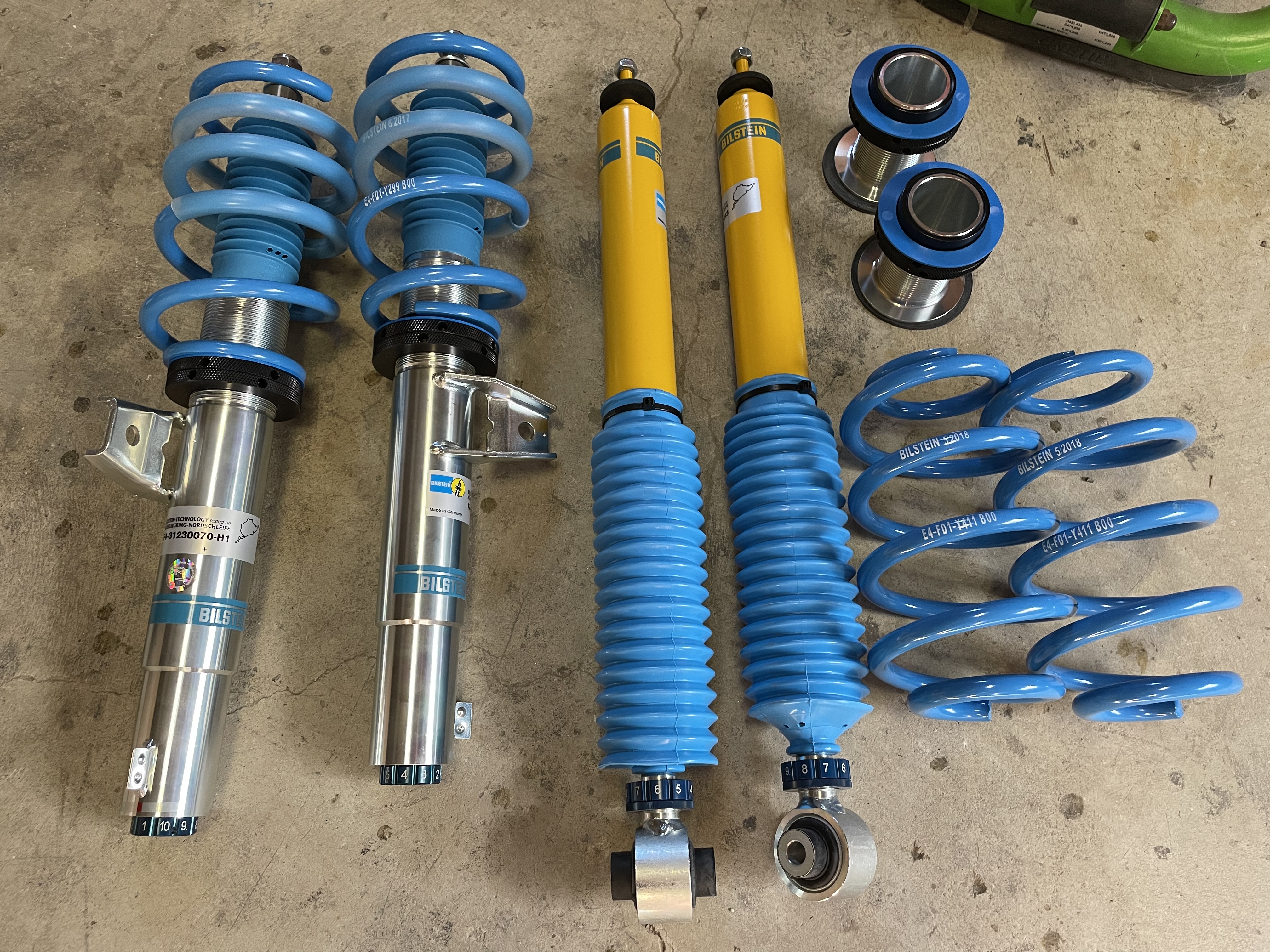 The Bilsteins were pretty easy to install, and after a bit of fiddling ended up with about 2 fingers of gap between the tire and fender all around, and that was set to the highest! A touch lower than I wanted... but it will have to work! Installed at the same time was the Eurosport front strut brace.

Here’s how it sits now. 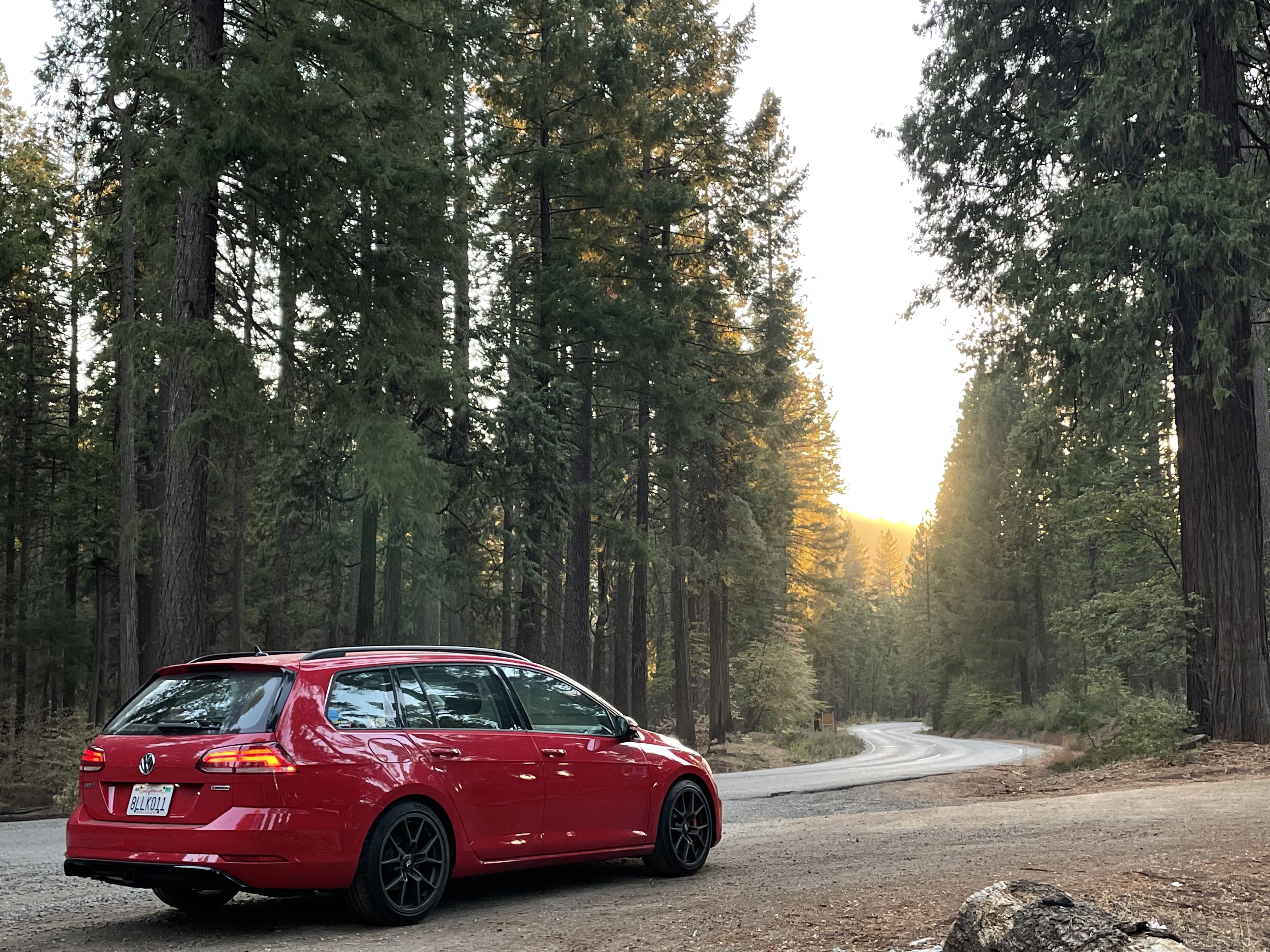 That’s his, now hers!

my wife had been driving a ‘02 4Runner the last couple years and has absolutely hated it! I’d previously had a 2010 GTI with a DSG that she loved to drive and she originally wanted another GTI. Unfortunately about the only currentl color GTI she liked was Falls Green, and we just barely missed out on a screaming deal on a 2019 in that color. After some deliberation and with current high pricing on used cars, we decided the extra room of a wagon made sense what with having 2 dogs and a baby, plus the money saved on a used wagon would pay for the planned tweaks to make it drive how she wants. 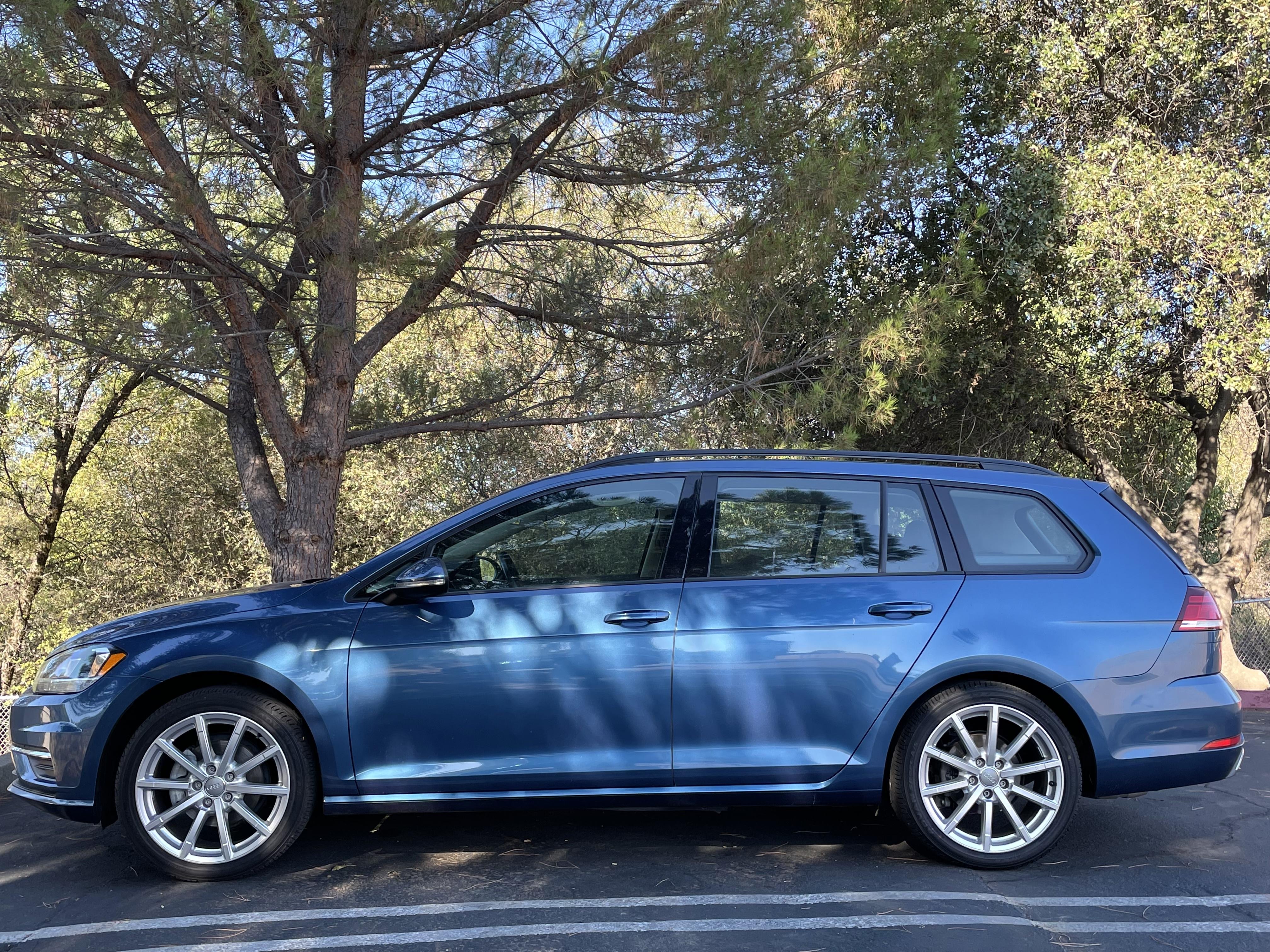 we picked this ‘19 Golf Sportwagen S 4Motion with DSG for $23k with 30k miles, certainly more than I wanted to pay but she loved it and we had the money so there you go.
Pretty quickly it got a APR stage 1 tune and DSG tune, followed by a Nuespeed rear swaybar and these wheels from a Audi (which look better than I thought they would!)

Being that her car will be the primary car we drive for longer trips, when carrying the baby etc etc, it will be for along the OEM+ type of thing. As I just pulled the Golf R springs and Koni’s off my car, those will be going onto her car, along with some Eurosport pucks up front to give her a touch more camber. She also eventually would love at least a pair of GTI seats, if not a full set, so I’ll be keeping my eyes peeled for those, otherwise her wagon likely won’t change a great deal.

In your face @Acadia18
Is the truth, enough for you to believe?

I fully respect others opinions, even when they're wrong.
2016 GTI w/ EQT Vortex & FBO
Currently custom tuning with EQT & Sneeky - Can read about the experiences here.

My next one should be a wagon if I have my way. VW should make a GTI version
C

Acadia18 said:
I fully respect others opinions, even when they're wrong.
Click to expand...

Ha, I’m sure there’s a backstory I’m missing.. all I can say is everyone makes their own decisions as to what cars are right for them and their family, for us, a bigger vehicle doesn’t help at all, even in snow.
C

Ragdude said:
My next one should be a wagon if I have my way. VW should make a GTI version
Click to expand...

Yep, or at least bring the R Wagon here. I’m sort of modeling mine after the R wagon, albeit being a little slower. For me the power of a stage one tune is plenty, I like having loads of torque down low, and care more about speed in a corner than speed in a straight line.
J

Nice brakes. Kinda wish I went that route myself. What improvement did the front strut tower brace make (if any)?

Silk blue still my favorite color along with limestone and tungsten... Oh damn, forgot about lapiz. Ok. I love all the colors.

J Peterman said:
Nice brakes. Kinda wish I went that route myself. What improvement did the front strut tower brace make (if any)?
Click to expand...

Thanks! The brakes are a massive improvement, though I’ve still been able to get them super hot. Just added the RS3 brake ducts, maybe those will help, though they don’t seem to actually extend down low enough to get into direct airflow, so we shall see about that. I’m still may go bigger on the front of my car, along with power pack rears, if that happens my current Stoptech’s will go to get car.

hard to say on the strut brace as I haven’t driven it a ton yet, but it seems to help make things feel a bit more direct up front, if that makes sense, though that could just be all in my head..
C

Overachieved today! Managed to get the Koni’s and Golf R springs swapped onto my wife’s car today. Front dropped about an inch, the rear just about a quarter inch. I used the thicker TT spring pads, I’m thinking I might swap those out for the stock ones to level things a touch, though that will wait till I get a hitch installed on it to see how that extra weight out back effects things. Along with the Koni’s were the Eurosport picks that are supposed to add .8 degrees of camber, they went on nice and easy. Took her car for a rip and it feels much better than before, though the Yokohama all seasons that came in the Audi wheels are not great.. 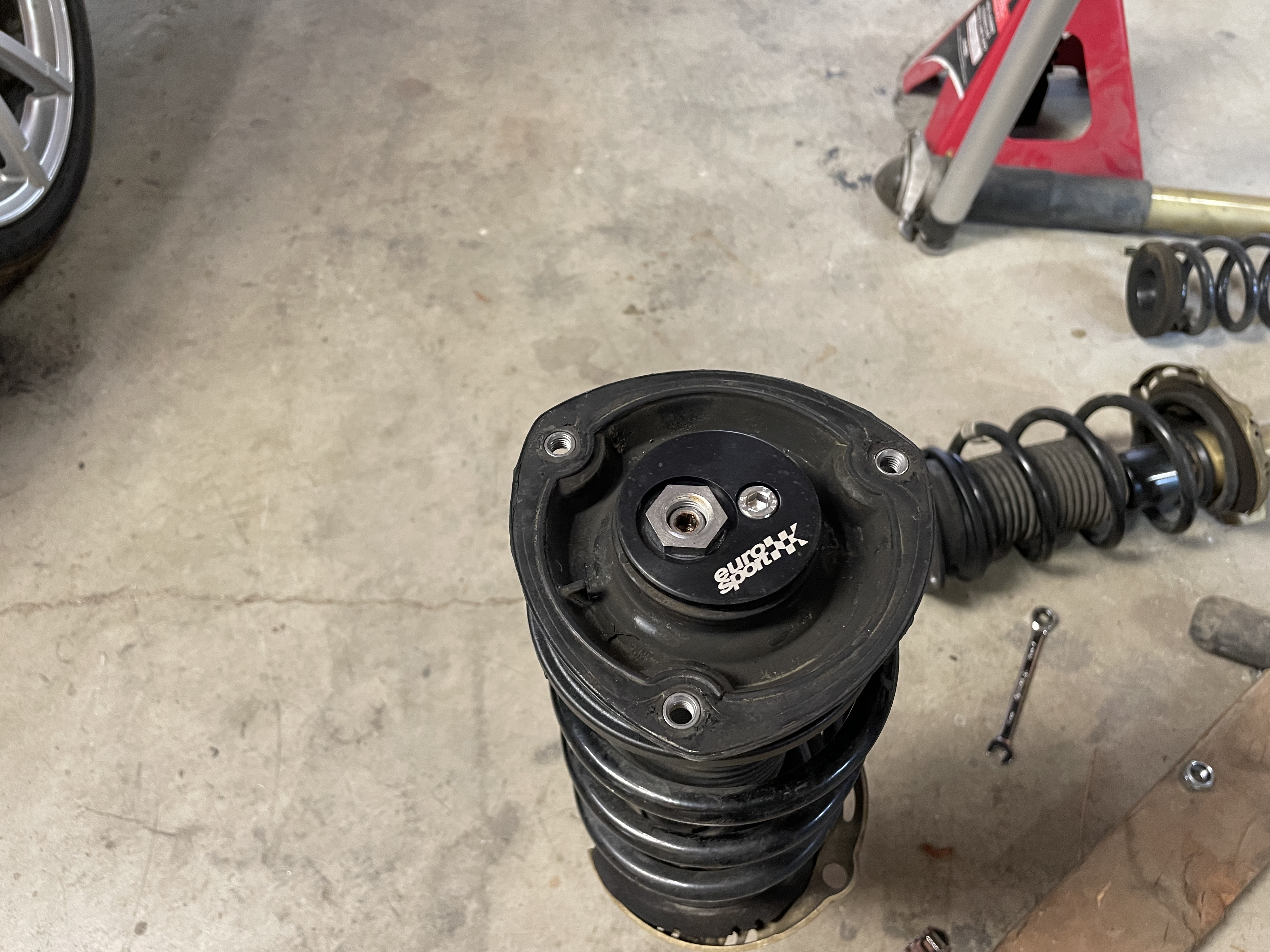 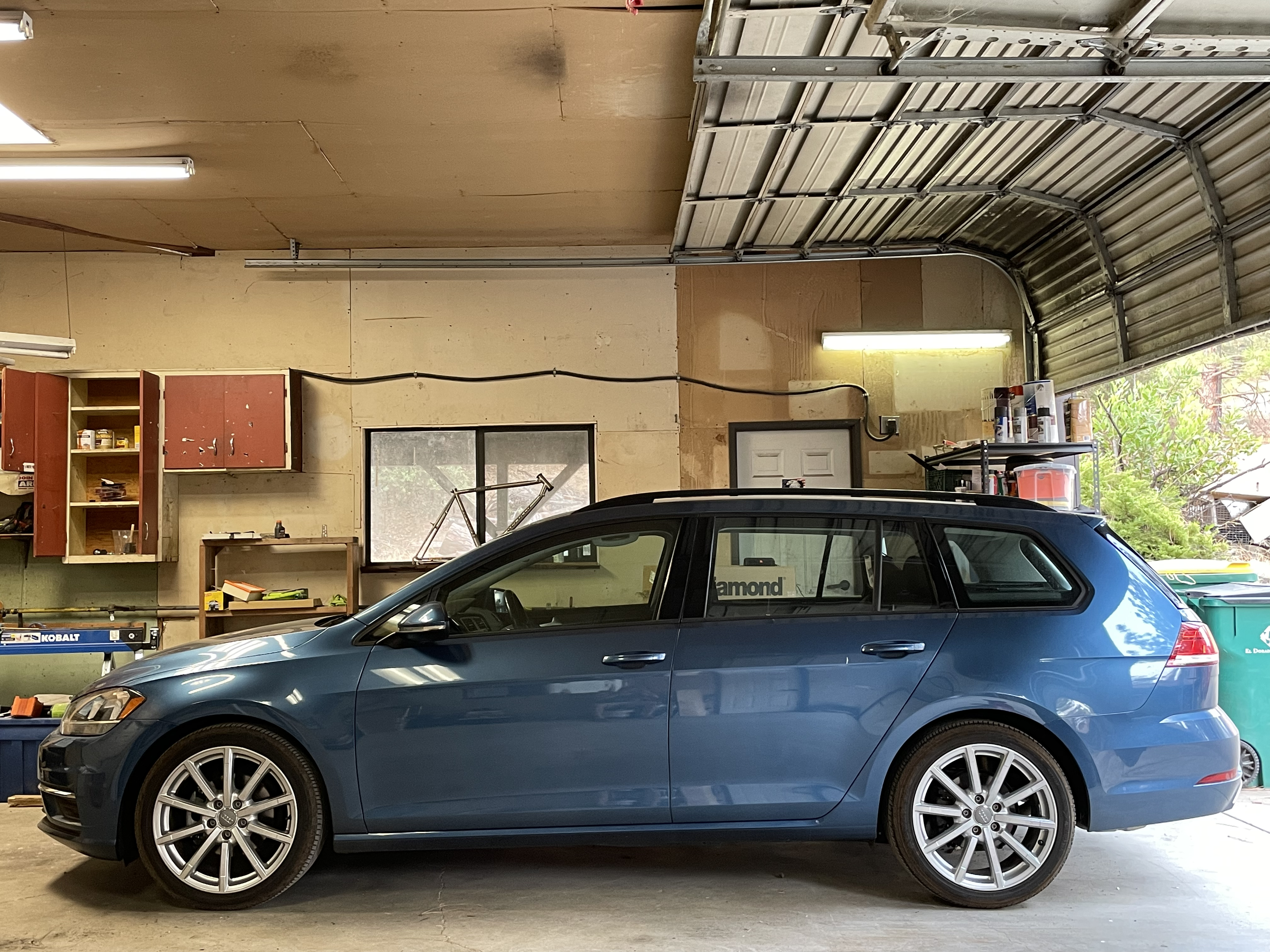 after getting her car sorted, I somehow still had some motivation and installed the GTI seat backs I’ve had for awhile, along with the Eurosport rear brace.
I'm a little bummed to be losing the cable remote released for folder the seats down, I may hang on to the stock seats for awhile and maybe eventually see about reupholstering then with the fabric from the GTI seat backs, probably stupid, but I’ve done significantly more stupid things than that.. (don’t get me started on the V8 swapped Volvo fiasco).
Eurosport brace went in, will be interesting to see what different it makes. 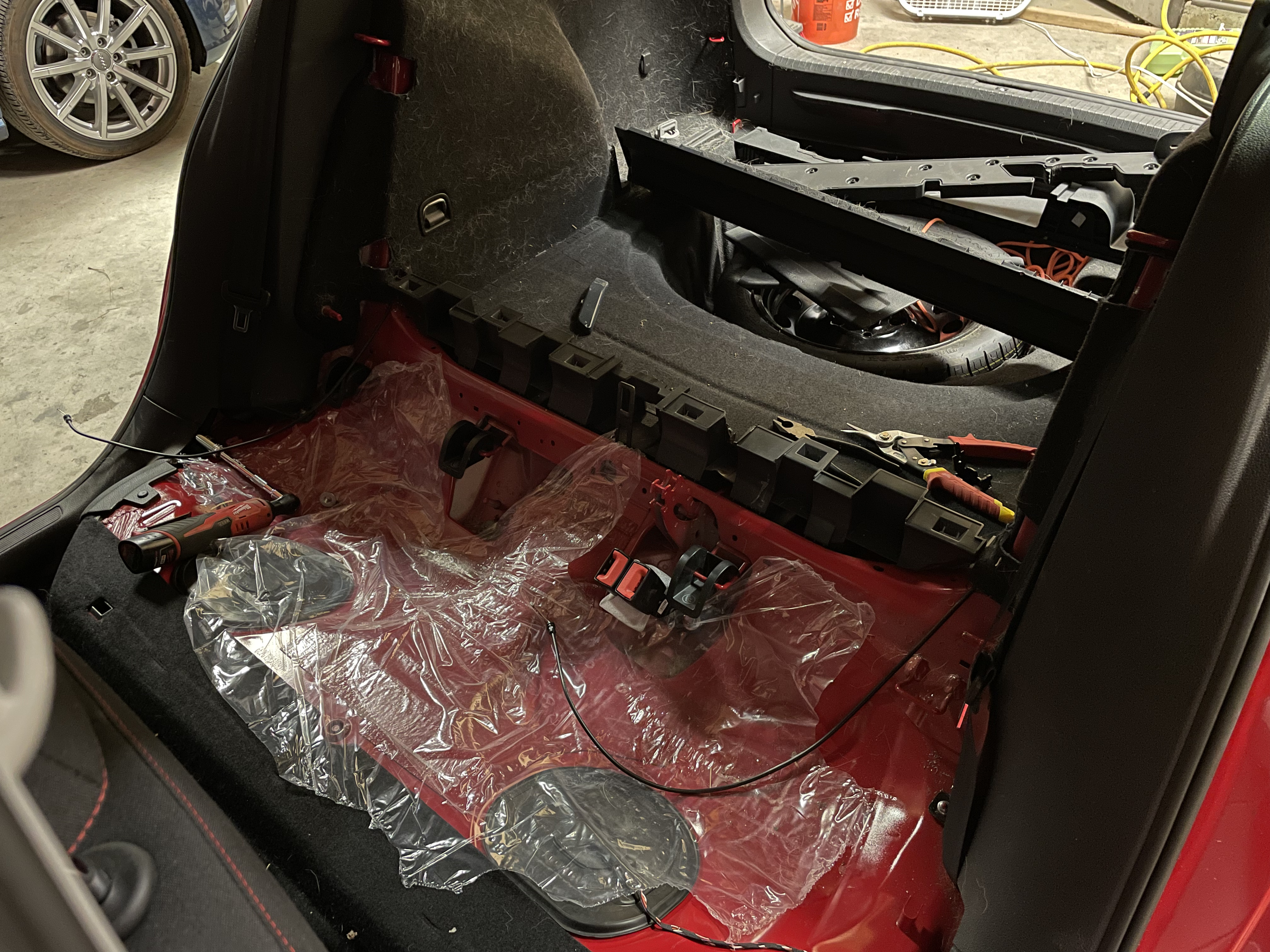 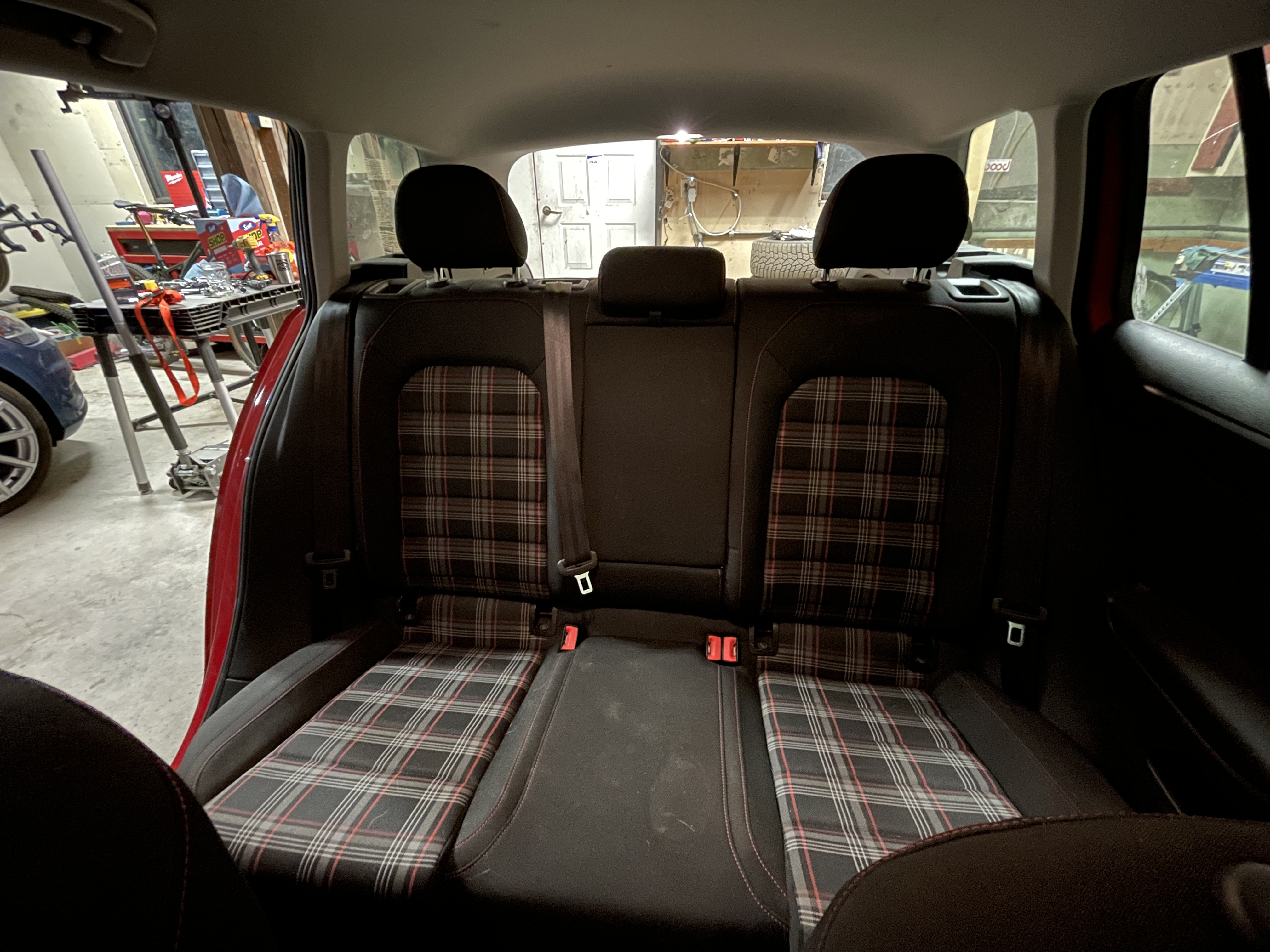 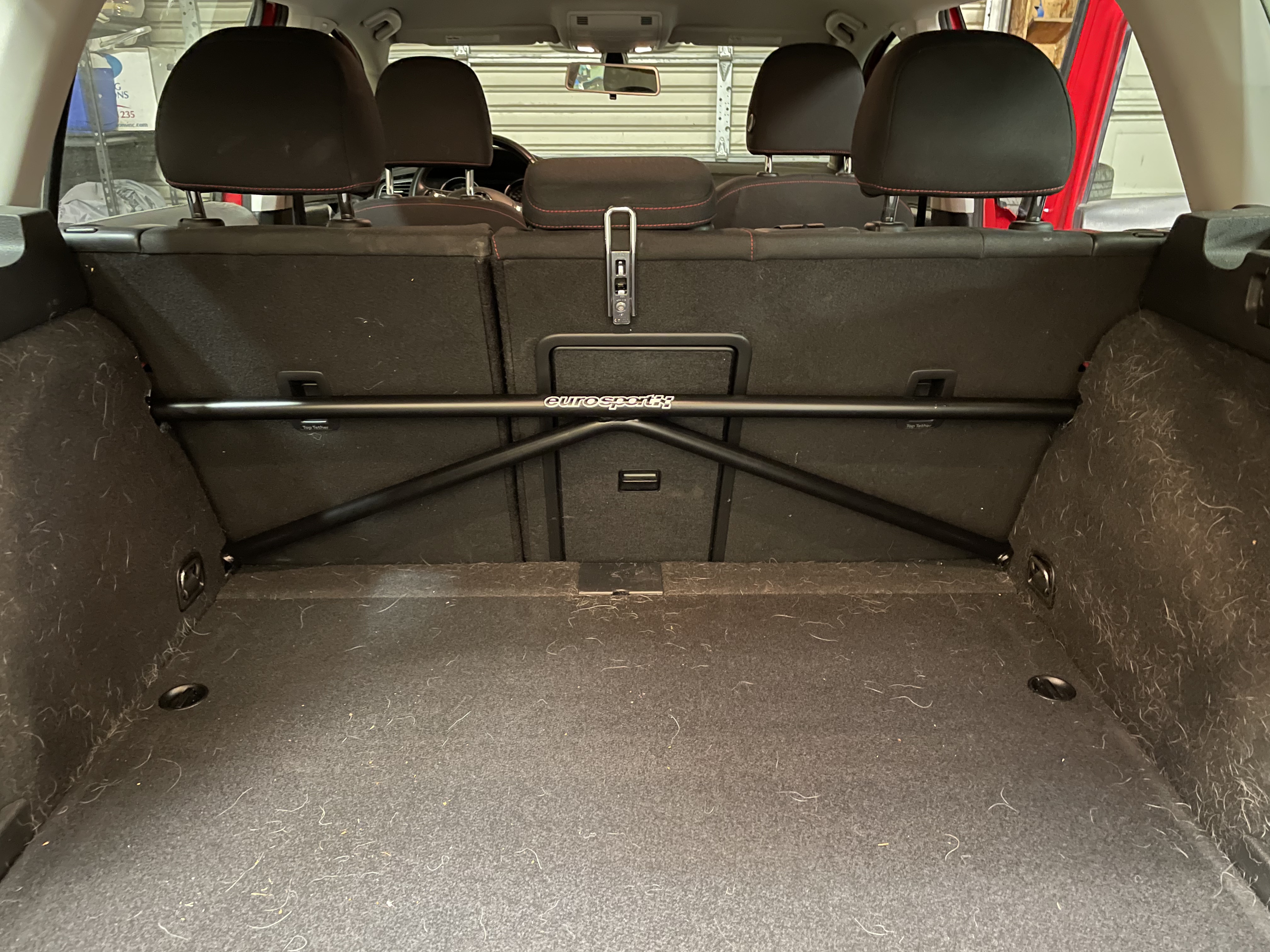 That’s it for now! Next weekend will bring a 034 front swaybar and front subframe deadset kit for my car.

I love this. My wife thinks I’m nuts for loving wagon but as a mk7 gti owner she wouldn’t mind if I bought one either.
What’s with the 87 tune? I didn’t know they offered such a thing.
2017 Ara Blue S3 IE stage 2/Intercooler/Downpipe (old setup) 11.6@116 TTS Caliper swap EMD Springs/RSB Neuspeed RSe10 ROW Headlight/Taillights Full Interior Lighting Package retrofit. Soon to be built motor and Vortex XL Build Thread
T

Great Sportwagen duo. The tornado red looks amazing on yours with the Neuspeed wheels.
C

Rare Ara S3 said:
I love this. My wife thinks I’m nuts for loving wagon but as a mk7 gti owner she wouldn’t mind if I bought one either.
What’s with the 87 tune? I didn’t know they offered such a thing.
Click to expand...

Yeah, The GTI would have worked fine, but at the moment having the extra space of the wagon has been really good for my wife.
They offer it for 1.8t Golf's and GTI's, don't think so on the R though. It makes just barely less power that the 91 tune, and gas is a touch cheaper, so it's fine, plenty of power to have fun with! If I ever went with a IS20 upgrade, I'd do up to the 91 tune, but otherwise will stay as is power level wise.

Trollin86 said:
Great Sportwagen duo. The tornado red looks amazing on yours with the Neuspeed wheels.
Click to expand...