So I think is the right forum for this topic. I am in the process of the retrofitting DCC to my 2015 TDI. I'll chronicle my adventures along the way, including part numbers, hiccups, etc. in subsequent posts. As the project continues the first post will be updated to include relevant information for later reference.

Note: The NAR Mk7 TDI has torsion beam rear suspension and comes with 50mm diameter front struts. This will add some complication to the retrofit in the way of additional parts that are not directly related to DCC but will be required in my case. It may also change the part numbers for some parts. But I'll look into that later on, likely after I get everything installed on my car. I will list the current MSRP's of major components for reference.

Front Axle, Steering Knuckle, and Bearing Part Numbers
* to be added soon, not necessary if you drive a GTI, but Golf/TDI have 50mm struts and to my knowledge DCC struts only come in 55mm


Here's a system overlay picture (oddly enough it shows a GTI front but with the torsion beam rear suspension): 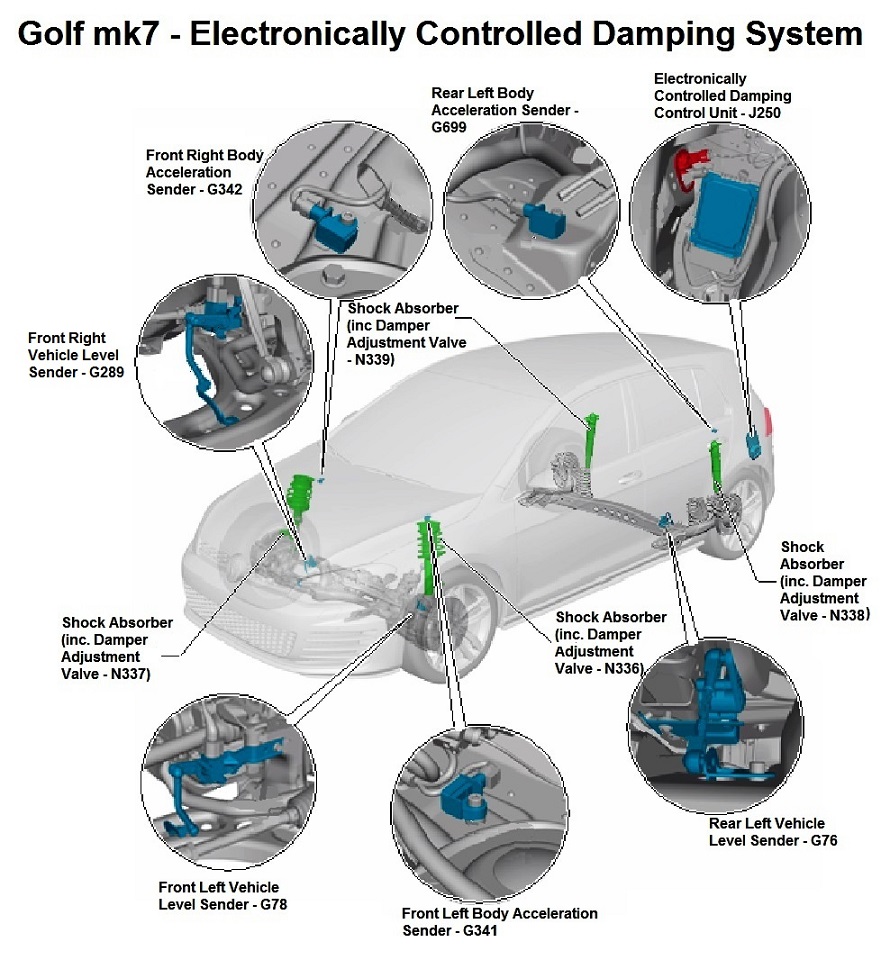 Then after all that has been fitted,you come to one obstacle that is almost impossible to do.
Parametrization of the DCC module.

All this I went through when I did DCC retrofit on RS3 Audi.
Its doable,but programming it is the hardest part.
Telegram : Click here
Phone Number - Whatsapp : +381653086899
Email : simaservis1108@gmail.com

That would be the hardest part for me, personally to do... but I'm happy to pay to have that done. Finding the part numbers, sourcing parts (at a subjectively reasonable cost), building the harness (finding connector, pin or repair wire part numbers), installing the harness (whether built or bought) is much harder than finding someone to do the coding, in my opinion.

Interested in where this goes. Love my Sport trim GTI but always thought the DCC would be amazing for daily driving.
C

The following post only applies if you drive a Golf/GSW TDI or a Golf TSI (GSW excluded). I'm only talking NAR. I guess it should also be said that anyone doing this should double check my research as I will not be able to reimburse for any parts that did not work for you (or that you did not need).

The MSRP of both the standard GTI/R/etc knuckles and the Clubsport S knuckles is the same, but both can be found for less. Standard ones are cheaper of course, I've seen them right around $300 new. New Clubsport S knuckles can be sourced from cars245, e-acca, or eBay (but shipping from the EU so may as well use one of the two vendors mentioned previously). I usually see them around $350 depending on exchange rate, plus shipping.

Used knuckles (generally with attached hub/bearing assemblies) are available from wreckers of course. I paid $275 shipped for a pair. Not knowing the mileage of the donor car I will likely replace the bearings (with mine or with new, to be determined).

I have not included front axles part numbers as I'm reasonably confident that your existing axles will work. I'm also not sure if there are axle differences between PP and non-PP GTI's (anyone with that info, please post it) and parts.vw.com is somewhat vague when it comes to certain parts. This info will be added to the first post at some point, maybe tomorrow... hopefully with shock/strut part numbers as well.
C

So I got the DCC harness in. In the course of doing my normal inspection of the harness for general quality and to see how/if the colors match the Erwin drawings I found that this harness was built with the expectation that the vehicle already has the rear left level sensor. This sensor would be installed on cars with self-leveling headlights. 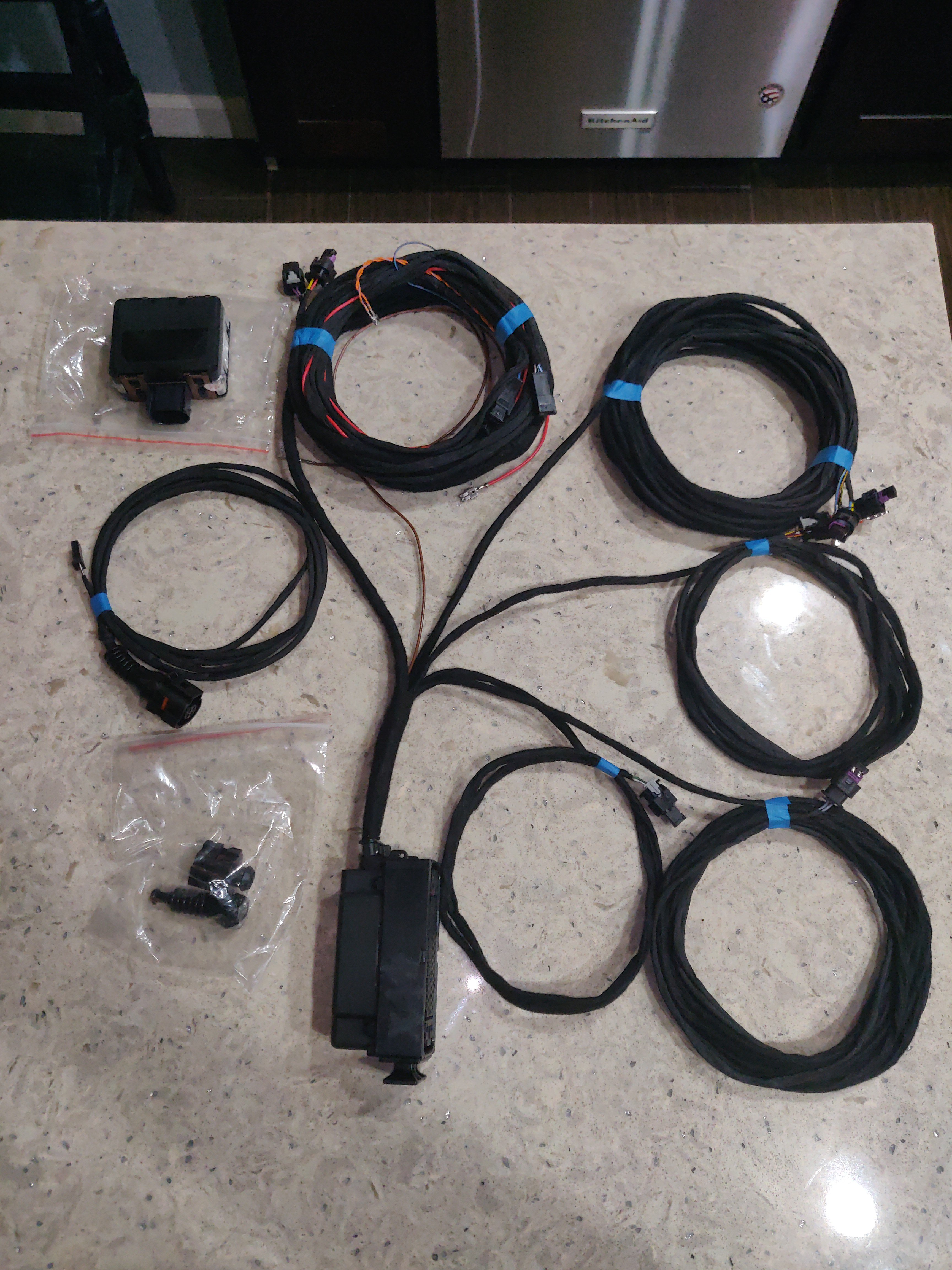 In retrospect maybe I could have deduced as much based on the attached wiring snippet. Module J250 is the DCC controller and G76 is the rear level sensor. The splice points, W23, W24 and W75 are "Sensor Connection 1, 2 and 3" respectively. A search of the full wiring diagram shows G76 on the headlight range control drawing. 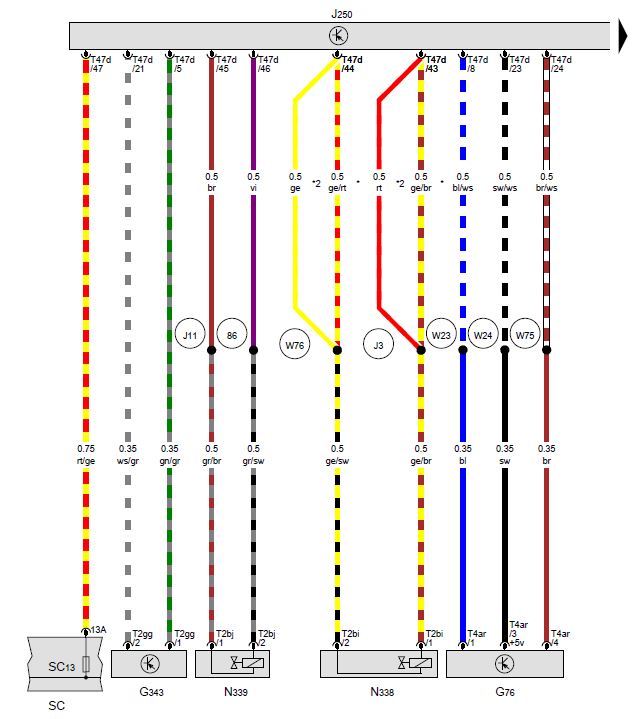 Pretty common on eBay, just search "VW 4 pin pigtail" or similar. Also available on Amazon with 4 wires (with the properly sealed pins), would just need to put a heat shrink boot on it. Presumably these Amazon ones won't have the VW/Audio logo molding but I'm sure they work just fine, and you get an extra wire in case you screw something up, haha.

More to come, maybe when I get home tonight.
A

This is awesome! When I got my GTI i could have swore it had DCC but what it had was the emergency brake assist. I was so bummed but so far I retrofited LED headlights, ACC, the factory alarm with sensor, and the driver assist camera. Really DCC would be the last thing I would retrofit as all my retrofits are based of comfort. I totally should should have purchased the top of the line GTI but it was out of reach as i took delivery of it

. Really looking forward to your journey as I'm looking at pulling the trigger on this but my take is put all the electronics and go with Billstein shocks/struts.

Do you know if the GTI would require new springs or the factory one compatible with the DCC equipment? I'm looking forward to ultimate comfort, would like a mild drop but function over form.
08' R32 #4416 - RIP >> 16' Jetta >> 19' GTI
R

Interesting. I wonder how we could learn how to disable DCC without buying a canceller from this process. (For fitting coilovers)
There are steps to do it but there is an issue that I don’t think anyone has solved in relation to the rear level sensor.

Incomplete steps
Step Uno: Unplug Fuse 13 in fuse holder C located behind the flip-down compartment to the left of the steering wheel (LHD).

There are some guys in Germany w/ retrofitted DCC to Octavias, Leon and Golf. DCC_retrofit_Skoda_Octavia Unfortunately everthing in German...

ZERO815 said:
There are some guys in Germany w/ retrofitted DCC to Octavias, Leon and Golf. DCC_retrofit_Skoda_Octavia Unfortunately everthing in German...

What is the disable-issue about the rear level sensor? To my understanding G76 is either connected to J250 (DCC ECU) or J745 (Headlight Range ECU). If vehicle is equipped w/ DCC J745 pulls the rear left leveling data from CAN. After disableing DCC I guess you have to connect G76 to J745 directly to get rid of a leveling sensor fault.
Click to expand...

If you try to disable DCC using the method I posted, taken from the rosstech site here. There may be other issues too. I’ve been trying to find if anyone had successfully coded out DCC without needing to fit cancellers and not having any errors.
2018 NSW 6 Hour Regularity Relay Champion
2017, 2018 NSW CAMS Supersprint State Champion
Instgram au.gti.clubsport
Track Hack YouTube Channel
Track Hack Parts Store
D

simaservis1108 said:
Then after all that has been fitted,you come to one obstacle that is almost impossible to do.
Parametrization of the DCC module.

All this I went through when I did DCC retrofit on RS3 Audi.
Its doable,but programming it is the hardest part.
Click to expand...

doctor said:
That's easy step after all.
Click to expand...

I'm glad to hear you say that, I will be reaching out, haha

Also I did see some of the other posts, when I get back to my computer I will give some of my thoughts... which may or may not be correct.
C

ZERO815 said:
There are some guys in Germany w/ retrofitted DCC to Octavias, Leon and Golf. DCC_retrofit_Skoda_Octavia Unfortunately everthing in German...

What is the disable-issue about the rear level sensor? To my understanding G76 is either connected to J250 (DCC ECU) or J745 (Headlight Range ECU). If vehicle is equipped w/ DCC J745 pulls the rear left leveling data from CAN. After disableing DCC I guess you have to connect G76 to J745 directly to get rid of a leveling sensor fault.
Click to expand...

Continuing today with wiring checks of the DCC harness and the "missing plug" for G76 (left rear level sensor) @ZERO815 is exactly right. This breakout (in this harness) for this sensor is wired up to the front of the car and would be long enough to reach the headlight range ECU. The expectation is that you would de-pin the three wires for G76 here and wire them directly to the DCC ECU. 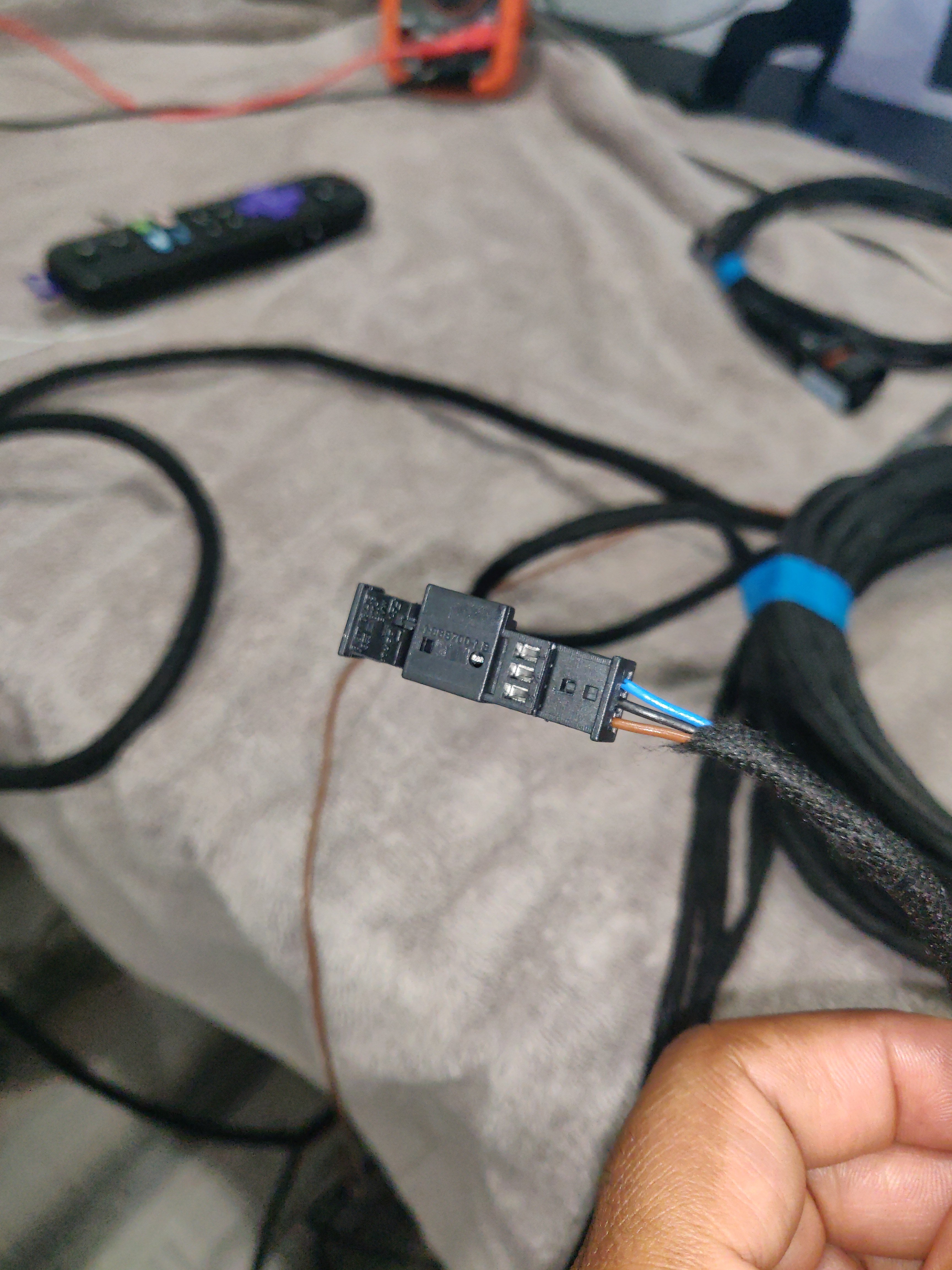 My solution for that will be partial custom wire harness coming from G76, tessa taped and zip tied to the harness that goes to the left rear shock. I will unwrap enough the harness near the DCC ECU connector to find the three G76 wires. I'll cut them here and splice my wires in. Then I'll cap/stow (on both sides) the wiring for G76 that came in the harness.
Last edited: Oct 5, 2020
C

... That's done, laser stamped some wires and dressed them up, just waiting on the 4 pin pigtail from eBay. 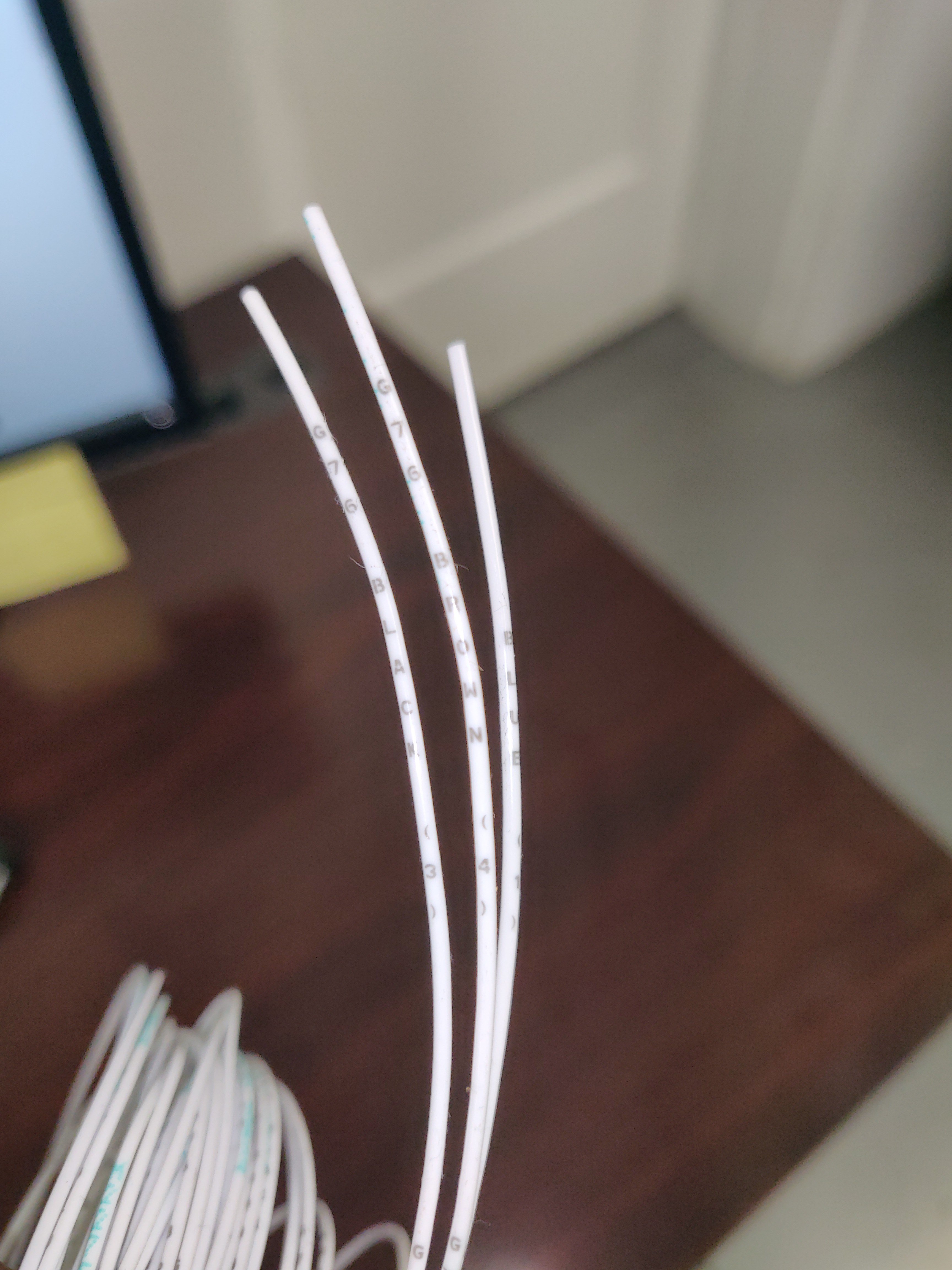 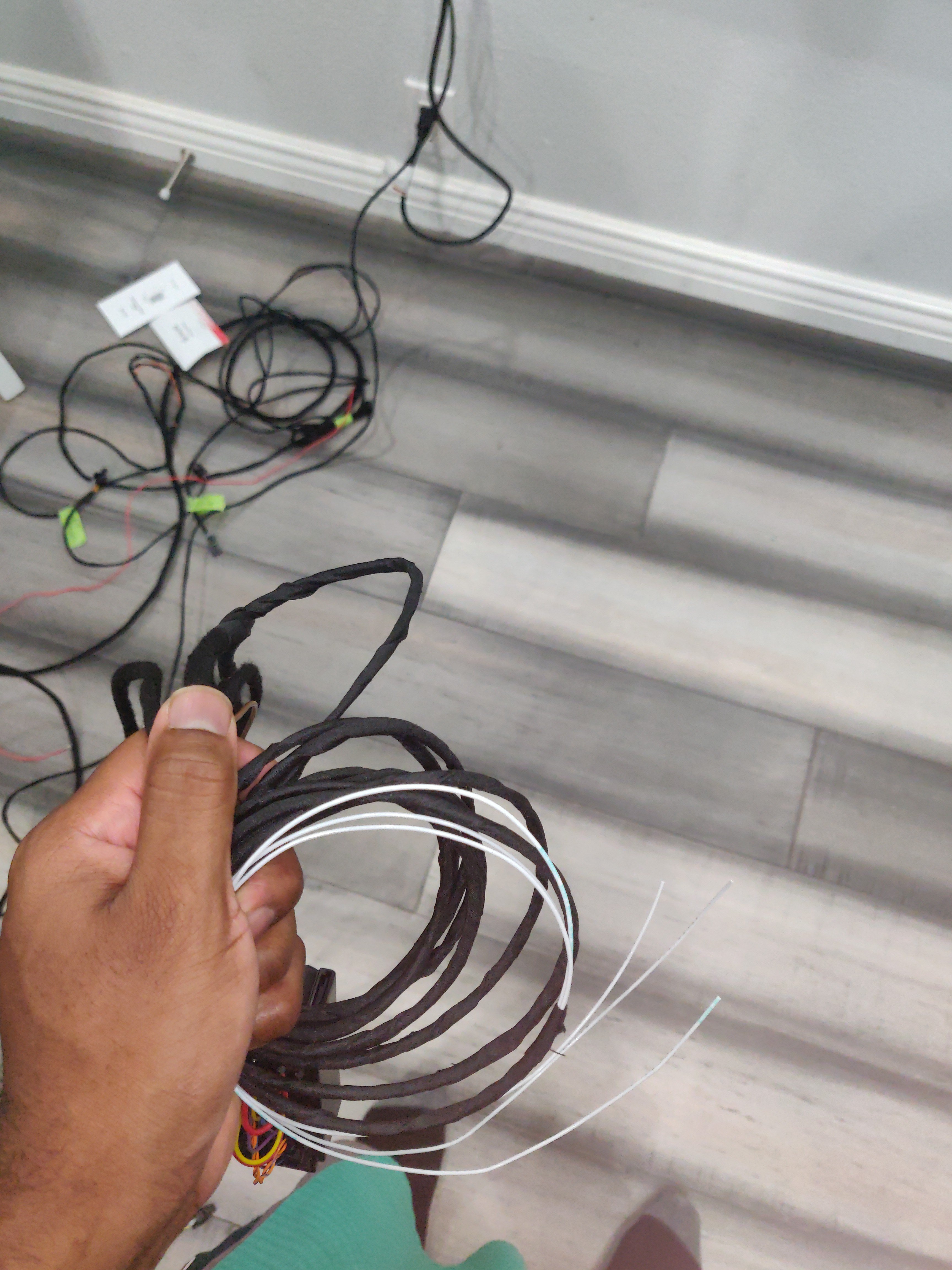 @Cuzoe Do you know if DCC has FEC or SWAP codes? I'm starting my journey, put a few things on order but started to wonder if I'm going to need special codes to enable any of this.
08' R32 #4416 - RIP >> 16' Jetta >> 19' GTI
You must log in or register to reply here.
Share:
Facebook Twitter Reddit Pinterest Tumblr WhatsApp Email Share Link
Top