19birel said:
Great thread! Did you ever get the CEL to go away with that track slag DP?
Click to expand...

The CEL is off because the EQT tune turns it off. If I were to flash back to stock to get inspected the light would be on as the car sits now.

My inspection expired 4 months ago so that's on the short list of things to sort out. I have a J-spacer that I need to install but I need a new exhaust clamp first before I take it all apart (for when I put it back together). I can't get the O2 sensor off without pulling the DP out.

I'll keep you posted when I get around to it.
MK7.5 Build Thread Here

Ezekiel81923 said:
The CEL is off because the EQT tune turns it off. If I were to flash back to stock to get inspected the light would be on as the car sits now.

My inspection expired 4 months ago so that's on the short list of things to sort out. I have a J-spacer that I need to install but I need a new exhaust clamp first before I take it all apart (for when I put it back together). I can't get the O2 sensor off without pulling the DP out.

I'll keep you posted when I get around to it.
Click to expand...

That may be true. I bought my tune over a year ago and haven't kept up with everything as well as I used to. My tune turns the light off, the secondary O2 sensor is unplugged so I'd definitely get a CEL if it wasn't turned off.
MK7.5 Build Thread Here

I didn't take a ton of great photos but I can confirm, this was a pain in the ass.

Getting the bumper off is easy. I had a new grille so I didn't have to remove that but I have to imagine that would've been impossible given how it clips in and how hard it was to get the new one in. I re-used the stock spoiler, fog lights, fog light flares, fog light trim and the two big structural pieces that the fog lights screw in to.

With the benefit of not needing to retain my stock bumper, I dremel'd and/or cut a lot of the bumper tabs holding the plastics on and they were still difficult to remove. Got everything off but each piece either snaps into the next piece or screws on top and it's all very painstaking trying not to break anything. Took about 5hrs from start to finish, which included having to get the cutting wheel out to remove some stubborn bolts from the aerofabb splitter so I could install the new one into the stock spoiler. Also realized one horn was not bolted to the bracket, just kind of was swinging around from the wire. So I got that bolted back up. Also got some loose belly plastics re-secured better so they don't flop around as much.

Paint on the new bumper does look nice but there were three areas where they didn't prep it very well and there is dirt or something under the paint. Wasn't pumped to see that after rolling around on the driveway floor for a few hours but they are small imperfections and overall the bumper does look way better than the one I took off. From 3ft you'd never see them, the bumper and I were very intimate for a while so I noticed.

So the lesson here is: don't assume that little piece of debris in the road will fit under the car. It won't. It'll break your front grille, which will then cost you lots of time and money replacing everything.

Hit a pothole changing lanes this morning. This time of year it is still/already dark when I am commuting to and from work so it's a crapshoot sometimes. Hit it hard enough that it didn't feel good but the wheels had survived similar in the past. Not this time.

Can only see that the front drivers side was bent pretty good. Rear same side hit too, not sure if that is dented on the inside or not. Will take everything off and see what kind of shape all 4 wheels are in before ordering replacements. Tires need replacing anyway so the winters will go on soon regardless. Holding air right now.

This is becoming a Repair Journal more than a build journal these days. 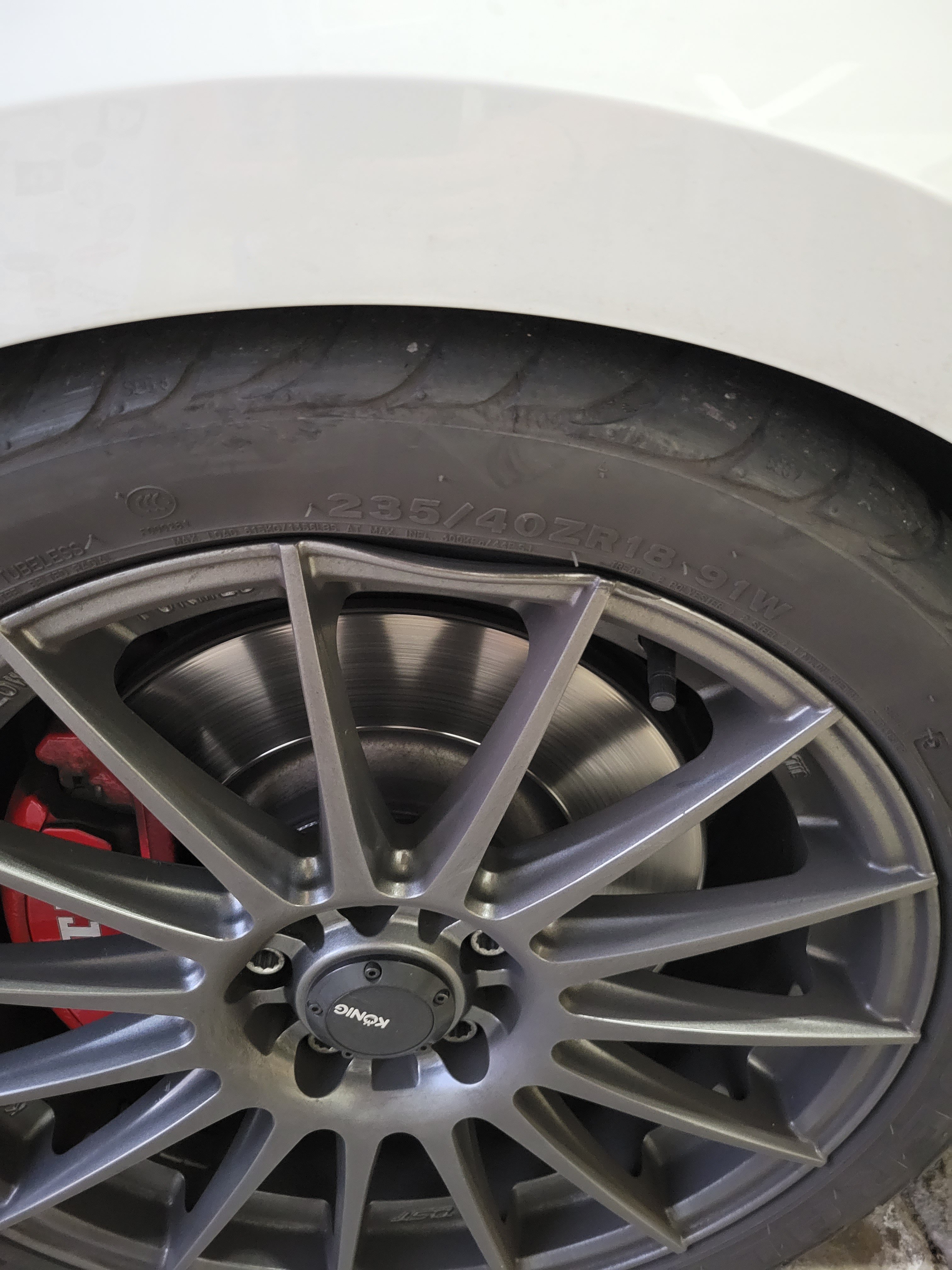 19birel said:
Noooo, sorry to hear about the wheel damage man, that sucks
Click to expand...

Initially saw this as an opportunity to get new / nicer wheels but I really like the look of the rennforms so I'll probably just snag two new wheels and have one as a backup. They are still in great shape, minus the bent one.

Trying to decide on tires right now since the whole set needs to be replaced.
MK7.5 Build Thread Here

Purchased a new set of Rennforms and Federal 595 RS-Pro's but won't see them before it's time to put the winters on so they'll be stored safely until spring.

Seemed easier to get a whole set delivered to my door mounted, balanced, and ceramic coated since I need all new tires anyway. I'll keep two of the old wheels as spares since I know I dented one and assume I damaged another.

When I bought the original wheels they were on 595 RS-R's and they had been tracked at least twice prior so definitely not full tread. I managed to get two long summers out of them, close to 20k miles, but they are basically drag radials now. I really liked the RS-R's. They are noisy but they grip. The Pro's are lighter and are 200tw vs 220 on the RS-R's and I'll have full tread so looking forward to some noticeable improvements with this tire.
MK7.5 Build Thread Here
You must log in or register to reply here.
Share:
Facebook Twitter Reddit Pinterest Tumblr WhatsApp Email Share Link
Top